NZD/USD continues to rally and has gained ground in Friday trading. In the European session, the pair is trading at 0.6699, up 0.35% on the day.

The New Zealand dollar is poised to record its best week since August. NZD/USD has gained 1.4% so far this week, and the pair is in green territory for a third straight day. The kiwi has gained more ground as New Zealand inflation rebounded in impressive fashion in the third quarter. CPI gained 0.7%, after a decline of 0.5% in Q2. The reading was shy of the forecast of 0.9%, but investors were impressed with the bounce back in inflation. The positive sentiment lifted the New Zealand dollar above the round number of 0.6700 in Friday’s Asian session, the first time we’ve seen that since September 21st.

New Zealand’s central bank has dropped hints that it could implement negative rates, a scenario which is being heard from other major central banks in this period of ultra-low interest rate levels. Negative interest rates would likely cause the New Zealand currency to depreciate, as investors would want to shift their assets into currencies that offer more attractive interest rates. Recent New Zealand economic data has been mixed, making it difficult to project when the RBNZ might slash interest rates below zero. However, the robust CPI release is an important sign that the economic recovery is gaining steam, which makes a rate cut less likely. The Official Cash Rate has been pegged at 0.25% since March, and a negative rate scenario is unlikely before April 2021, at the earliest. 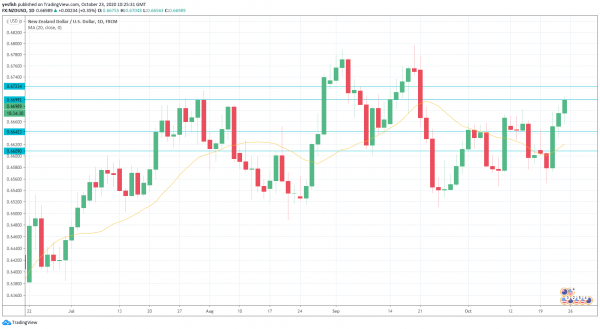