The Australian dollar is moving slightly higher against the US dollar over the last month as investors are waiting for the capital expenditure data for the third quarter on Thursday at 00:30 GMT ahead of the GDP figure on December 2. In the meantime, the aussie is forming a positive structure on the back of the positive vaccine news, which have opened up a pathway to a safe Australia, with the first doses set to be distributed to healthcare workers and the elderly by March.

Capital expenditure slumped in the second quarter of the year, falling by 5.9%, including a –4.4% fall for building and structures and a contraction of 7.6% in equipment. The forecast for the third quarter is a decline of 1.5% quarter-on-quarter. Equipment spending may fall by as much as 10% in Q3. The economy is awash with excess capacity and firms have been in survival mode in these uncertain periods. However, a negative reading in capital expenditure could not necessarily cause a decline in Q3 gross domestic product next week. 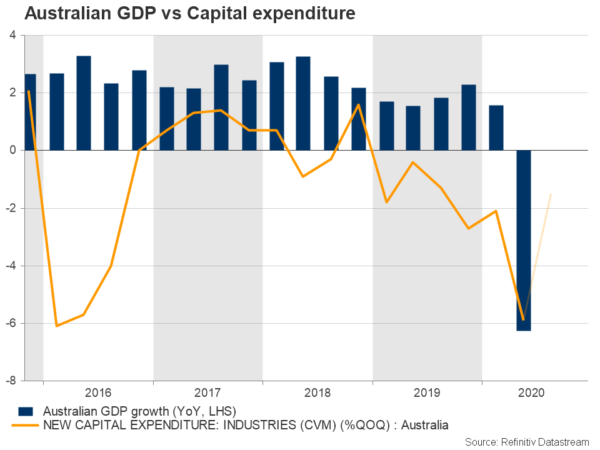 The nation’s economy contracted 7% q/q in the three months to June, following a 0.3% drop in the prior period. It was the second consecutive quarterly reduction and the sharpest on record, entering the first recession in 30 years as the coronavirus pandemic took a huge toll on the economy. In case of a strong contraction in capex, the GDP number may fail to post a rebound, showing that full recovery is not yet on cards during these crucial periods.

During November’s meeting, the RBA decreased the cash rate to a record low of 0.1% from 0.25% previously, as widely expected. The RBA also cut its target rate for three-year bond yields to 0.1%, from 0.25%, to be in line with the cash rate, which, it committed that will remain unchanged until inflation is sustainably within its 2-3% target band. Policymakers mentioned they expect positive GDP growth in Q3, despite the restrictions in Victoria. The nation’s GDP growth is expected to be around 5% over the year to June 2021 and 4% in 2022. Furthermore, the focus will be on the unemployment rate, which is expected to remain high, but to peak at a little below 8%, rather than the 10% expected before.

Aussie still consolidating against US dollar

From the technical point of view, aussie/dollar has been trading in a horizontal trajectory within the 0.7000-0.7340 area since September 3. The price could be at risk of a bearish retracement if the capital expenditure number disappoints, however, vaccine news seems to be more important for significant movements in the market. Price action is likely to rechallenge the 20- and 40-day simple moving averages (SMAs) at 0.7242 and 0.7185, respectively. A leg below it could take the pair until the 0.7000 round number and the 23.6% Fibonacci retracement level of the up leg from 0.5506 to 0.7413 at 0.6960, ahead of the 0.6800 handle.

Upbeat numbers are likely to propel the price higher towards the two-year high of 0.7413 before testing the 0.7490 resistance, taken from the peak on July 2018, endorsing the long-term bullish outlook. 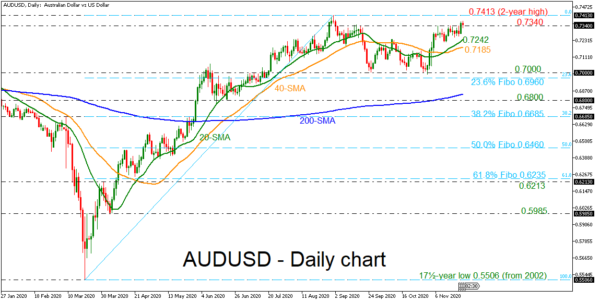