U.S. – Coming Out of the Winter Lull

The first week of March offered a rich buffet of economic data. While it was not all positive, overall it indicated that the U.S. economy continued to come out of its winter lull. The ISM indexes diverged in February, with manufacturing improving and services falling on the month. However, at levels of 60.8 and 55.3 respectively, both indexes remain well in expansionary territory (above the 50-point threshold). Vehicle sales, on the other hand, fell 5.7% to 15.7 million units in February – a reading that was on par with expectations. Severe winter storms that left many Texans without power, among other things, likely played a role in the pullback by reducing foot traffic to dealerships.

Unfavorable weather conditions, however, did not prevent the hiring pace in the U.S. economy from accelerating last month. In fact, payrolls rose by 379k in February, a better outturn than expected (Chart 1). Data revisions also added 38k jobs to the two months prior. Gains in February were concentrated in the leisure and hospitality sector (+355k), which appears to have benefited from eased COVID-related restrictions. The unemployment rate, meanwhile, fell slightly from 6.3% in the month prior to 6.2%.

Improvements in public health conditions build the case for a stronger economic rebound in the months ahead as the economy reopens further. COVID-19 cases have flatlined at around 65k per day recently. Vaccinations, on the other hand, continue at a brisk pace, averaging two million per day. The recent approval of the Johnson & Johnson (J&J) vaccine should be another shot in the arm for vaccinations, given that it requires only one dose and can be stored more easily than the vaccines currently in use. With firm commitments from Pfizer-BioNTech, Moderna and now J&J, President Biden has stated that vaccines should be available to every adult American by the end of May, sooner than initially anticipated.

The likely approval of the $1.9 trillion stimulus package in the days ahead will be an added boon to the economy. Having passed the House, the American Rescue Plan Act is now being debated in the Senate. Some changes have taken place in recent days. For instance, President Biden has agreed to stricter income-eligibility limits for the $1,400 stimulus checks, which means that fewer Americans will receive direct payments this round. The bill could see some more tweaking. The goal is to have it on the President’s desk before the enhanced jobless benefits expire in mid-March.

The added stimulus will hasten the economic recovery, with growth expected to accelerate to nearly 6% this year. This level of activity will be accompanied by stronger inflation and higher bond yields. Price pressures have been on the rise in recent months, a message also echoed by the ISM price subindexes (Chart 2). Long-term Treasury yields, meanwhile, continued to climb higher this week, with the 10-year rate sitting at 1.57% as at the time of writing. The Fed is aware that inflation could rise above the 2% target. But, as reiterated by Fed Chair Powell yesterday, it expects this to be ‘transient’. As such, the Fed appears poised to remain patient in keeping monetary policy accommodative for some time (for more, see our Dollars & Sense publication). 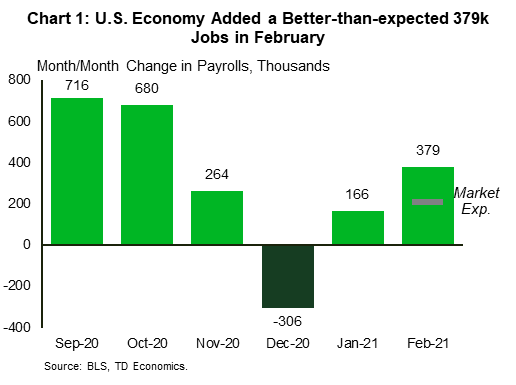 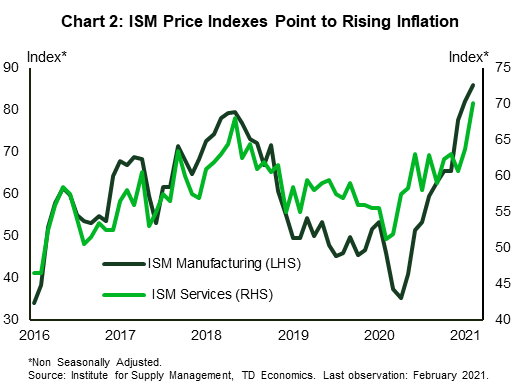 Financial markets were busy digesting the continued rise in long-term government bond yields this week. In Canada, the 10-year government yield ticked up around 15 bps to 1.5%. Yields remain low by historical standards, but have been advancing unabated since September on rising inflation and growth expectations (see our latest Dollars & Sense).

Global and U.S. equity markets closed the week in negative territory, but the S&P/TSX Composite managed to remain flat. Its heavier tilt towards the energy and financial sectors provided some offset to the declines seen elsewhere. The WTI benchmark oil price shot up 7% to US$66 (Chart 1). OPEC+’s monthly meeting concluded with another extension of its production cuts in April, catching markets by surprise. For Canada, this persistent uptrend in oil and other commodity prices provides much-needed and earlier-than-expected respite for oil producers and some provincial government coffers.

Turning to economic data, releases for late 2020 and early 2021 continue to paint a better-than-expected picture for Canada’s economy. Real GDP data released Tuesday showed a 9.6% (annualized) rise in output. This was, well above consensus expectations which called for a 7.3% increase. There were some unusual movements beneath the strong headline figure. Inventories, a typically volatile component, contributed 7.2 ppts to growth (Chart 2). This was partly driven by higher stockpiling in the retail sector. As expected, housing continued to fire on all cylinders, with broad-based strength in residential investment (+18.5% on the quarter). On the flip side, household spending and net trade exerted a modest drag on real GDP. Business investment was mixed, with a strong increase in machinery and equipment investment (+31.1%) partly offset by a 10.2% decline in non-residential structures investment.

The real GDP release wrapped up what constituted the sharpest annual contraction in Canada’s real GDP since the Great Depression (at -5.4%). From a forward looking-perspective, however, the better-than-expected handoff for the fourth quarter sets Canada on a more robust trajectory for 2021. What’s more, a flash estimate of 0.5% m/m growth for January points to continued resilience.

Indeed, this was further corroborated by this morning’s international trade release. A broad-based surge in nominal exports (+8.1%) sent Canada’s trade balance to surplus territory for the first time since 2019. The headline figure was partly skewed by transitory spikes in aircraft and retail gold bar transactions. That said, nominal exports would have still been up more than 4% after removing these volatile components. In that vein, the upward momentum in commodity demand and prices should help turn net trade into a positive contributor to growth in the first quarter of 2021.

Although caution remains warranted, economic data continues to point to better days ahead for Canada’s economy. In other related news, the approval of the Johnson & Johnson vaccine – the fourth vaccine approved for use in the country – by Health Canada this morning should help ramp up the pace of vaccinations in the coming months. 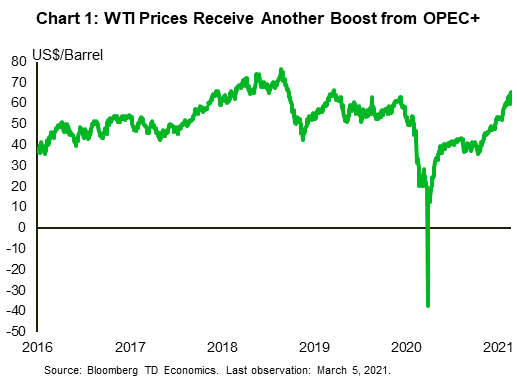 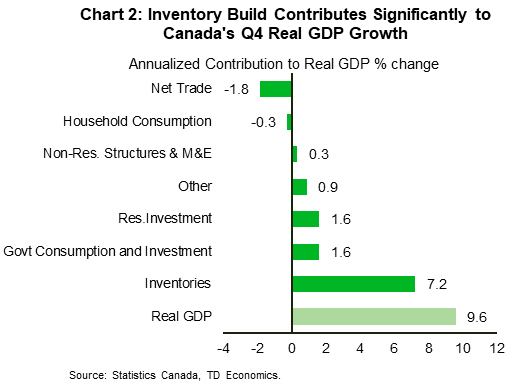 The overall CPI probably rose sharply in February, led by a surge in energy prices. The rise in the more trend-setting core part was likely much more modest, with the rise held down by declines in used vehicles and airfares and minimal gains once again in the rent components. Hotel rates likely rose. We continue to view COVID as disinflationary, on balance, although base effects will result in strengthening on a y/y basis in the next few months. Our 0.4% m/m forecast for the overall CPI in February implies 1.7% y/y, up from 1.4% y/y in January but still down from 2.3% y/y a year earlier. Our 0.1% m/m forecast for core prices implies 1.3% y/y, down from 1.4% y/y in January and 2.4% a year earlier. 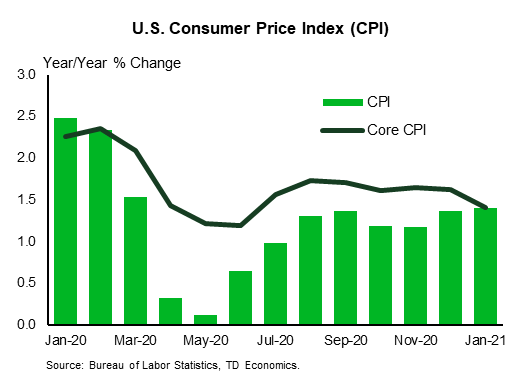 We look for the Bank of Canada to leave policy and forward guidance unchanged at the March 10th meeting as Governing Council attempts to balance an improving outlook against a market that is already pricing rate hikes by mid-2022. As this will pose a communications challenge, we believe the Bank will try to say as little as possible with a brief policy statement that acknowledges the recovery has outpaced expectations while tying forward guidance back to forecasts from the January MPR. The policy statement should also flag heightened uncertainty given the ongoing pandemic, slow vaccine rollout, and risks around COVID variants and a 3rd lockdown. 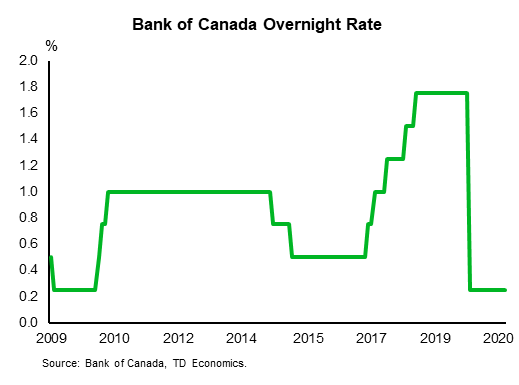 TD looks for the Canadian labour market to bounce back with the creation of 150k jobs in February, recouping a significant portion of the 213k positions lost in January. Quebec should lead the regional performance on a rollback of emergency health measures, but we do not expect to see the level of rehiring in Ontario until March given the modest improvement in mobility trends as most of the province remains under lockdown. Services should account for the bulk of new hiring on a rebound in retail trade and food services, industries that rely more heavily on part-time employees which may translate into a smaller increase in total hours worked. Job growth of 150k should see the unemployment rate drift lower to 9.0% from 9.4% in January, with a partial offset from higher labour force participation. 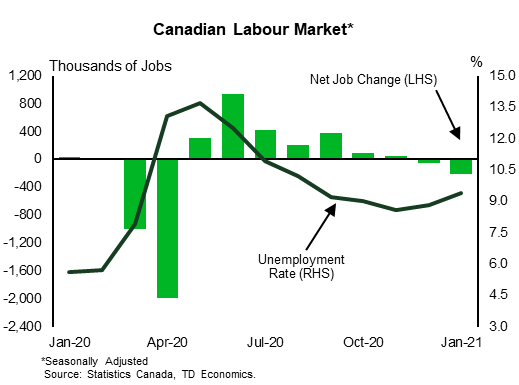