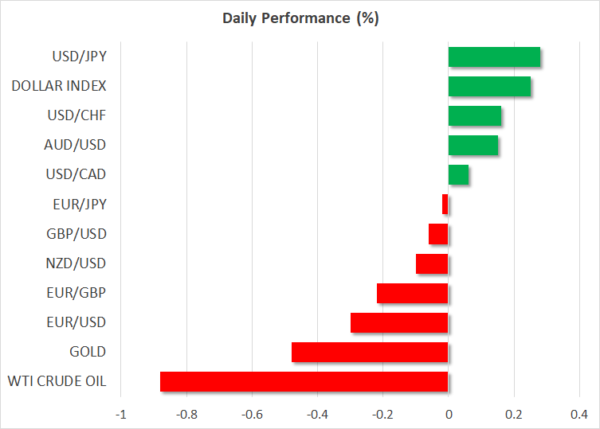 The Federal Reserve bumped up its growth and inflation projections in its latest meeting on Wednesday even as the majority of policymakers predicted that rates would stay near zero through 2023. FOMC members expect GDP growth to hit 6.5% in 2021 as the Biden stimulus boosts the recovery speed from an earlier pace of 4.2% forecast in December. Employment is also forecast to recover quicker, while inflation as per the core PCE measure is anticipated to hit or rise slightly above the Fed’s 2% target in each of the next three years.

Despite the rosy economic projections, Fed chief Jerome Powell struck a somewhat sombre note in his press conference, insisting that the recovery is “uneven” and “far from complete”. Powell also tried to reassure markets that tapering remains a long way off and that it will take some time before substantial further progress is achieved.

However, Powell did not try to push back on the recent steepening of the yield curve, and whilst he repeated his recent remarks that he would be concerned by any “disorderly conditions”, he thought the Fed’s current policy stance is “appropriate”.

Bond markets appeared to calm after Powel’s press briefing, with yields at the short end of the curve falling sharply. However, the yield on 10-year Treasuries, which spiked to 14-month highs just before the Fed’s announcement, fell only moderately, before surging again today. Ten-year yields have now jumped above 1.70% and are fast approaching 1.75%, as markets continue to test the Fed’s tolerance level for higher yields.

With the United States now clearly leading the global recovery and vaccinations in the country reaching the 100 million milestone, it’s hard not to be optimistic about the economic outlook. More importantly, investors think it’s only a matter of time before inflation picks up and forces the Fed’s hand.

At the current rate, the Fed may have to rethink its stance before its next meeting at the end of April, though Powell has given no indication anything is about to change.

In equity markets, traders initially cheered the Fed’s reinforced dovish statement. The Dow Jones Industrial Average and S&P 500 rallied to new all-time highs yesterday and Asian stocks closed mostly up on Thursday. However, Nasdaq futures have tumbled today as the drop in yields proved short-lived. As the bond selloff resumes and long-term borrowing costs climb again, it’s clear tech stocks with sky-high valuations are not on investors’ shopping lists. But the dollar is.

The US currency was back in demand on Thursday, recouping a good chunk of yesterday’s losses when it skidded following the Fed meeting. The dollar index was last up about 0.17% as the euro fell back to around $1.1940.

The single currency failed to make a significant bounce on the back of the dollar’s retreat during March as the EU’s vaccine saga shows no sign of ending soon. The European Medicines Agency is due to give its verdict today on whether there is any link between AstraZeneca’s vaccine and several reported cases of blood clots amongst people who have received the jab.

The EU’s problems with the AstraZeneca vaccine have even led to a row with Britain as the bloc considers whether to restrict the export of domestically produced vaccines to countries such as the UK that do not have huge shortages. Making matters worse, London and Brussels are fighting over the Northern Ireland protocol, which has the potential for a dangerous escalation in the coming months.

Nevertheless, Britain’s impressive track record for its vaccine rollout has provided the Bank of England with reason to be optimistic about the outlook. The Bank will announce its decision at 12:00 GMT and is expected to keep policy unchanged while sounding more confident about the recovery. The pound was last trading flat against the dollar, steadying from yesterday’s gains.

The Australian dollar on the other hand continued to charge forward, jumping to a 3-week high of $0.7849 after much stronger-than-expected jobs figures out of Australia earlier today. But the kiwi fell back following disappointing GDP numbers out of New Zealand.

The yen was caught in a bout of volatility on Thursday after Nikkei reported that the Bank of Japan could widen its yield band for 10-year JGBs from 20 points to 25. The Bank’s Governor had previously indicated the yield band would not be widened so the news caught markets off-guard, briefly pushing dollar/yen down to 108.62. The pair has since reclaimed the 109 level but could struggle until the BoJ announcement tomorrow.