Businesses were more confident in the economic recovery from mid-February to mid-March. Expected future sales rose to the highest level since 2009 – despite a still exceptionally challenging outlook for firms in high-contact service sectors. The Bank of Canada’s survey was collected during the lull in virus spread between the second and third virus waves in Canada. But restrictions re-implemented to-date have once again largely targeted high-contact service-sectors that were already very weak. The rest of the economy has likely continued to improve to-date.

Planned investment has increased with more firms operating closer to capacity limits. Current production capacity constraints actually eased slightly in Q1, but many businesses were still reporting difficulties finding workers at the current wage. With the go-forward sales outlook still being boosted by government supports and vaccine roll-out, a record share of firms plan to increase investment in machinery & equipment over the next 12 months. Hiring plans also increased from already high levels a quarter prior.

Inflation expectations edged higher, although are still within the Bank of Canada’s target range. The share of firms expecting inflation in the top-half of the central bank’s 1% to 3% target range doubled, boosted by higher input costs. And the share expecting above-target inflation increased to 13%. Canadian businesses have been successful at raising prices for raw materials and industrial outputs. The price of Canadian exports has increased sharply year-over-year, even outside of a jump in oil prices. To-date, that has not filtered into significantly higher consumer prices, aside from a jump in gasoline prices relative to very low year-ago levels. And consumer inflation expectations in the separately-released consumer expectations survey this morning were little-changed.

The more optimistic tone reinforces that the economic bounce-back could be sharp once virus risks recede. That, in turn, depends on vaccine distribution ramping up, with the Bank of Canada unlikely to want to significantly tap the brakes on monetary policy stimulus until that recovery is more assured. But more optimism from businesses, and some early evidence inflation expectations are edging higher, sets up for the central bank to announce a reduction in the pace of asset purchases in April, and we continue to expect the beginning of a gradual interest rate hiking cycle to start next year. 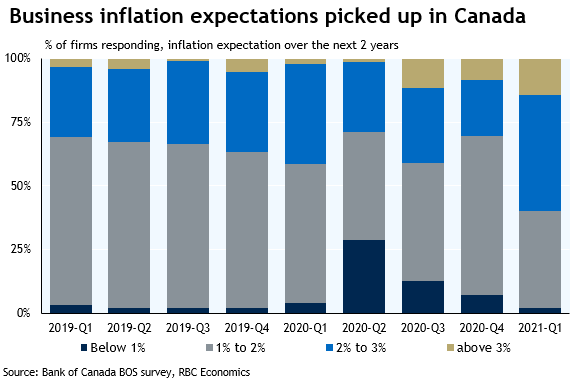 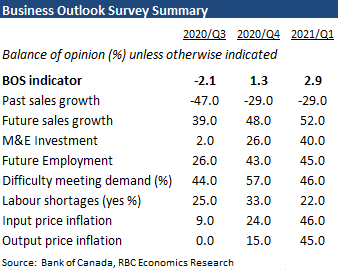