The Weekly Bottom Line: Federal Budget Headlines The Week Ahead

Who said the stock market rally was over? After a slow start to the week, the S&P 500 hit another all time high. As of writing, the index is up 1.3% compared to last week’s close. Equities were helped by strong earnings and better than expected economic data. But interestingly, bond yields dropped on the news. At the time of writing, the 10-year Treasury yield was down nine basis points compared to last week. Usually, bond yields rise in response to strong data. The fact that yields drifted lower might seem like an anomaly but is likely due to the market already having priced in the economic recovery and inflation expectations. Meanwhile, growth stocks behaved as expected. Lower yields tend to increase future earnings of growth-oriented companies. So, tech stock rebounded as yields dropped.

On to one of economists’ favorite topic these days, inflation! Consumer prices jumped in March (Chart 1). Inflation rose 0.6% month-on-month (m/m), pushing headline inflation to 2.6% year-on-year (y/y). Meanwhile, core inflation (ex. food and energy) was up 0.3% compared to the previous month and 1.6% higher compared to a year ago. The rise in inflation was mostly due to energy prices which went up 5.0% on the month. Energy prices will continue to keep the headline inflation number elevated over the next few months. In fact, year-on-year inflation numbers are likely to push through the 3% mark given the drop in prices in the second quarter of 2020. 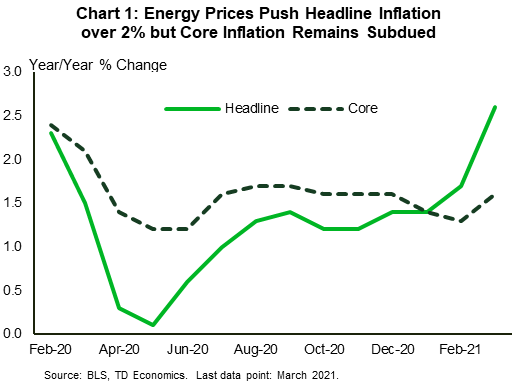 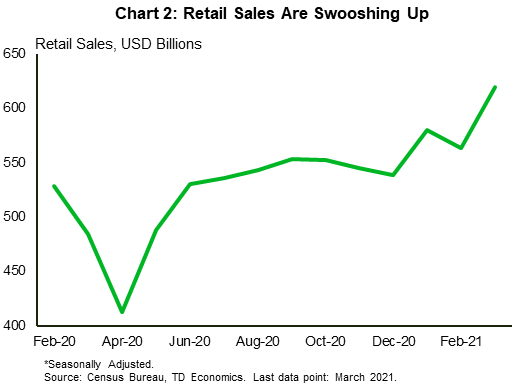 The upcoming week is shaping up to be big one for Canada. The federal government is unveiling its budget for the first time in two years on Monday April 19th. The Bank of Canada will follow that up with a policy announcement and its Monetary Policy Report two days later.

There is a lot of hype around the federal budget. Aside from the two-year delay, this fiscal plan promises to be one that pushes forward long-standing goals of the Liberal government. Topping the list of priorities is childcare. At the party convention last week, Finance Minister Chrystia Freeland told attendees that now was the time to “get this done”. It’s unclear how exactly policymakers will accomplish this mission, but it’s certain that funding for childcare will feature prominently in next week’s budget.

There are also expectations that the government will announce more spending on climate change, pharmacare, housing, and infrastructure. We will also get details on how the government plans to spend the $70 to $100 billion in funds that were left unallocated in last year’s Fall Economic Statement (FES). Given the economy’s better-than-expected showing thus far, there may be less need to funnel this money towards the near-term recovery. Still, given the extraordinary nature of the third wave of the pandemic, a share of spending is likely destined to provide immediate support for Canadians and businesses most impacted by the health crisis.

How will the government pay for all of these programs? The answer appears to be by taking on more debt. There are some indications that tax increases are on the way, particularly on digital companies. Even still, revenue increases are unlikely to cover all the new spending. With bigger deficits the debt to GDP ratio will continue to head higher. In the FES last November, the government saw the ratio rising by 20 percentage points to a little over 50% in 2020. Additional spending will send the ratio higher over the coming years. We will be looking for details on how and when the government plans to put it on a downward trajectory.

The Bank of Canada (BoC) will be watching the budget closely as it prepares the April Monetary Policy Report (MPR). The Bank had assumed the government will spend $70 billion of the unallocated funds in the January MPR. This will need to be revised if the budget incorporates something different. In fact, the Bank’s previous forecasts will require a hefty upward revision given the resilience shown by the Canadian economy. In January, the Bank expected GDP growth in the fourth quarter of 2020 to be 4.8% q/q annualized, but actual growth came in double that at 9.6% (Chart 2). Likewise, the Bank expected GDP to contract in the first quarter of 2021, but monthly data suggest the economy will see a strong expansion to start the year.

Given the stronger recovery, the Bank will likely begin tapering the asset-purchase program next week. However, it may wait to see the impacts of the third wave before making a call on the overnight rate, which it had previously said will remain at the effective lower bound until sometime in 2023. 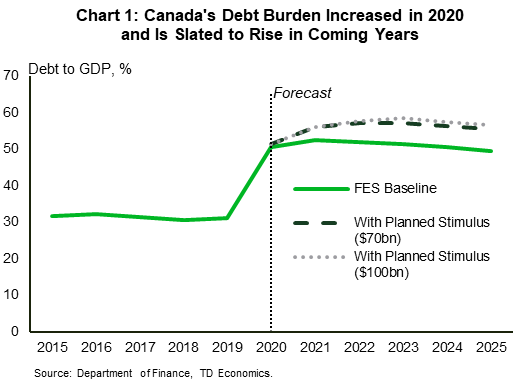 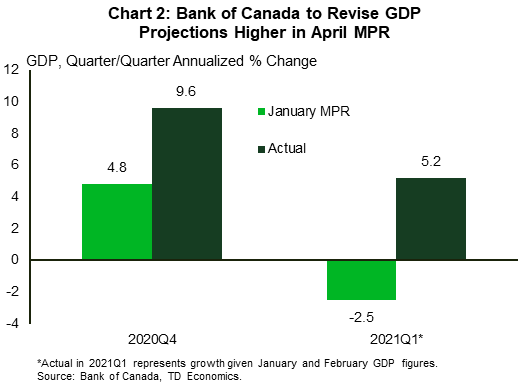 Corporate taxation has been the topic du jour for policy makers in recent weeks. In addition to President Biden’s push to raise the U.S. corporate tax rate to 28%, Treasury Secretary Janet Yellen recently proposed a global minimum tax for larger multinational corporations, in order to “level the playing field” and avoid tax leakage.

This push comes after years of governments around the world actively reducing tax rates in order to attract corporate investment. Since 2004, the average global corporate tax rate has declined from 29%, to 23.7% in 2021 (Chart 1). For the U.S., it was only four years ago that the Trump administration passed one of the largest corporate tax cuts in modern history. The Tax Cuts and Jobs Act (TCJA) of 2017 reduced the U.S. corporate tax rate from 35% to 21%, with the intent of triggering a corporate investment boom. Corporate investment has disappointed, but the policy did result in a greater percentage of profits being retained by large corporations. To be exact, corporate earnings after tax and interest payments rose from 67% of total operating earnings at the end of 2017, to 75% by the end of 2018. Corporations retained a larger share of the pie, while investors in these companies saw a valuation adjustment and strong price appreciation.

The international story is also telling. U.S. companies have spent years setting up and investing in holding companies (non-bank) domiciled in lower taxed countries. Indeed, roughly half of U.S. foreign investment has been in holding companies, with the majority of this investment in Europe. The TCJA eased this trend by lowing the corporate tax rate to more competitive international levels. Conversely, the Biden administration is proposing a different approach by proposing to raise the tax on overseas profits from 10% to 21%. The new strategy will calculate the minimum tax on a country-by-country basis, which should help address the tax avoidance issue.

Policy analysts know that U.S. corporate taxes are both controversial and convoluted. From an economic perspective, it is imperative the Biden administration strikes the right balance to ensure that corporate incentives to invest remain in place. Assuming the administration is successful in unwinding a large portion of the Trump administration’s corporate tax cut, it must also make sure it does not erode U.S. competitiveness. Hence the focus on rewriting the rules globally. Thus far, we have seen supportive voices from Europe, stating that an agreement on corporate taxation could bring about stability. While there is a big difference between voicing support for ending tax avoidance and actually signing onto a U.S.-led agreement, this is a step in the right direction. 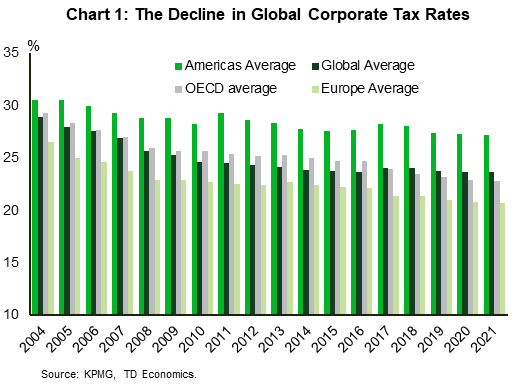