USD Remains Near One Month Low

The USD was rather weak on Friday remaining near a month low against a basket of its peers, as the Fed reiterated its view that any spike of inflationary pressures is more likely to be temporary. Also an improved market sentiment, did not allow for the greenback to gain any safe haven inflows from the market which could provide a boost hence the greenback retreated for a second consecutive week. On the contrary the market’s optimism, tended to push US stockmarkets higher, with Nasdaq, Dow Jones and S&P 500 reaching new record highs. On the commodity front it should be noted that oil prices tended to be on the retreat given the increase of the number of new daily infections in countries like India and Japan, with the latter expected to experience a fourth wave. On the other hand, the increased uncertainty tended to boost Gold’s prices, which were also supported by the low US Treasury yields as well as a rather weak US dollar. The pound got a boost from the improved economic outlook, given the intense vaccination program and the easing of the lockdown measures in the country since the start of the past week. The Loonie got some support from the improved market sentiment as a commodity currency and strengthened against the USD, yet CAD traders tend to eye BoC’s interest rate decision on Wednesday. EUR traders focus on ECB’s interest rate decision on Thursday, as well as the preliminary PMIs for April due out on Friday.

In the FX market on the Technical side the USD index remained relatively stable hovering just below the 91.65 (R1) resistance line. Despite the stabilisation, we maintain our bearish outlook and for it to change we would require a clear breaking of the downward trendline incepted since the 31st of March. Please note that the RSI indicator below our 4-hour chart is currently between the readings of 50 and 30 providing the bears maybe with a slight advantage. Should the bears actually remain in charge, we may see the index breaking the 91.30 (S1) support line, aiming for the 90.75 (S2) level. Should the bulls take over, we may see the Dollar Index breaking the 91.65 (R1) resistance line, the prementioned downward trendline and aim for the 92.15 (R2) resistance hurdle.

As for the equities market, we noted the new record highs marked by Dow Jones, yet during today’s opening the index dropped just below the 34100 (R1) support line, now turned to resistance. We maintain our bullish outlook, as long as the upward trendline incepted since the 26th of March, continues to guide the index. Should the bulls maintain control over the index, we may see it breaking the 34100 (R1) and start aiming once again for the 34400 (R2) resistance level. Should a selling interest be displayed by the market today, we may see the index aiming if not breaching the 33800 (S1) support line, after breaking the prementioned upward trendline, while even lower we note the 33500 (S2) support level.

On a rather easy Monday, given the light calendar ahead, we note Eurozone’s current account balance for February due out during today’s European session. During tomorrow’s Asian session, we tend to highlight the release of the minutes of RBA’s last meeting.

On Tuesday’s Asian session RBA releases the minutes of its last meeting while UK’s employment data for February are due out. On Wednesday, we get New Zealand’s inflation rates for Q1 as well as UK’s and Canada’s CPI rates for March while on the monetary front we note from Canada, BoC’s interest rate decision, and from the UK, BoE’s Governor Bailey speaks. On Thursday, from the Eurozone, we note ECB’s interest rate decision and the consumer confidence indicator for April, while from the US we note the initial jobless claims figure. On Friday, we get the preliminary PMIs for April from Australia, Japan, France, Germany, Eurozone, the UK and the US as well as Japan’s CPI rates for March and UK’s retail sales for the same month. 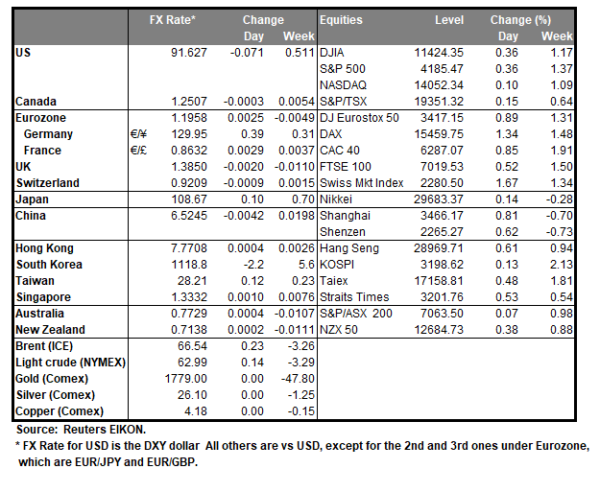