The aussie has been trading sideways over the last three months with the employment report for April, due out on Thursday at 00:30 GMT, likely to attract some attention. The recession in Australia is over as the economic indicators have turned positive; however, the recovery still has a long way to go. Nevertheless, unemployment is expected to return to pre-pandemic levels faster than expected, while in April it likely remained at the same rate as the preceding month.

Unemployment rate to remain the same

The unemployment rate is forecasted to remain at 5.6% as the economy recovered further from the disruption caused by coronavirus. This was the lowest jobless rate since March, as the economy recovers gradually from the coronavirus pandemic. However, in April, the economy is predicted to have added only 15k jobs from 70.7k in the previous month and the participation rate is forecasted to be flat at 66.3%. The nation’s economy is forecasted to take off faster than expected, reaching its pre-pandemic levels within the next few months, while it will continue to enjoy low interest rates for the next few years 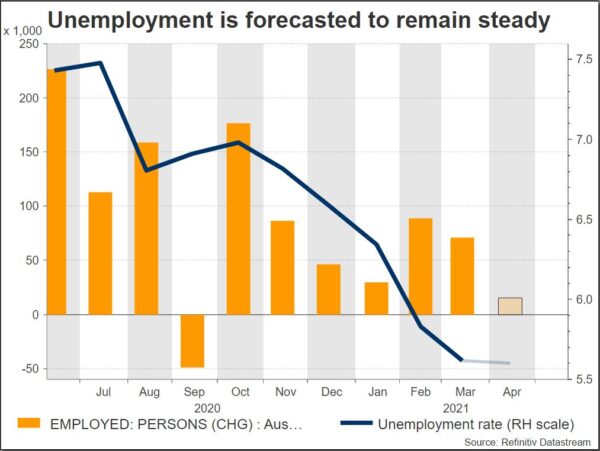 Reserve Bank Governor Philip Lowe mentioned that interest rates need to stay at a low level until 2024, as inflation will be subdued until the unemployment rate dives between 4%-5%. At the latest Reserve Bank of Australia meeting, policymakers said that a rise in inflation and wage growth is on the cards. Inflation is predicted to tick up above 3% in the second quarter. The vaccine roll-out also looks to be gaining more attention, however, concerns about worsening trade relations between China may weigh on business confidence.

In the FX market, aussie/dollar is moving horizontally, holding above the crucial support of 0.7570 over the last three months. If the unemployment rate falls further, the bulls may take the market up towards the 0.7886 resistance, which is the upper boundary of the sideways channel ahead of the more-than-three-year high of 0.8006. More advances could meet the 0.8130 barrier, registered in January 2018.

In conclusion, combined with the global vaccine rollouts and the growing expectation of a swift, full recovery, Australia’s domestic strength is encouraging the consumer to maintain an optimistic outlook. 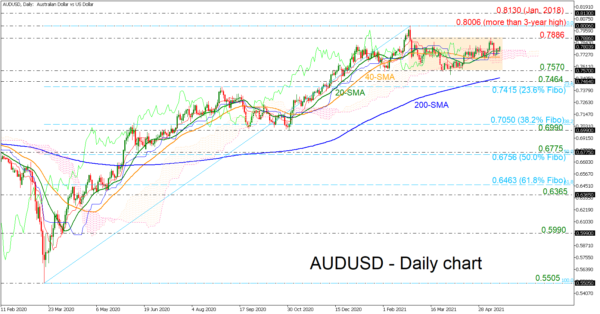