The Australian dollar is in positive territory on Monday. In the European session, AUD/USD is trading at 0.7733, up 0.32% on the day.

The week started out on a sour note, as inflation fell in May. The Melbourne Institute (MI) Inflation Gauge, a monthly release, fell 0.2% in May, marking its first decline in seven months.

With major economies showing stronger growth in the post-Covid era, central bank officials are keeping a close eye on inflation, as higher inflation could prod the central banks to tighten policy sooner rather than later. The MI release is just one reading, but if upcoming inflation data shows that inflation is not moving higher, then the RBA will not be under pressure to scale back its QE program. A taper by the RBA (or even a hint of a taper) would be bullish for the Australian dollar.

RBA expected to hold the course

The RBA holds its monthly policy meeting on Tuesday (1:30 GMT). The bank is expected to maintain policy settings and keep interest rates at a record low of 0.10%. The economy is performing well, but the recent outbreak of Covid in Melbourne and subsequent lockdown is a reminder that Covid has not yet been defeated.

At the same time, economies are reopening as Covid recedes, and some central banks have become more hawkish in response. The Bank of Canada recently tapered its QE programme, and the Reserve Bank of New Zealand surprised the markets last week when it signalled the potential of a rate hike in the second half of 2022.

The RBA has remained in dovish mode, stating that it has no plans to raise rates prior to 2024. Still, the RBA acknowledged the strong Australian recovery in its quarterly update earlier in May, and if the economic data continues to point upward, the bank may have to change its timeline for a rate change. Meanwhile, the bank’s commitment to remain dovish has kept the Aussie from rising. 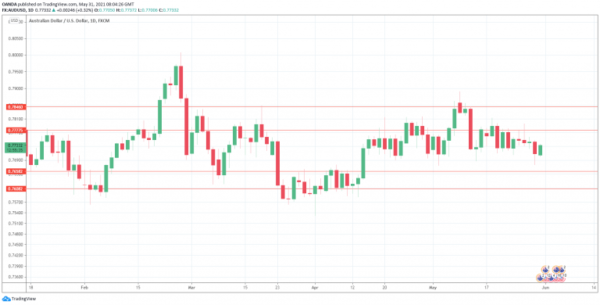