Week Ahead – Fed to Steer Away from Taper Signals

It’s a busy summer week, with three central bank meetings and a ton of crucial data. The spotlight will be on the Fed, which is unlikely to signal that it’s considering an exit strategy from cheap money. That’s the ultimate path, but it’s too early. Any real dollar strength is a story for late summer. Meanwhile, policy meetings in Japan and Switzerland could confirm that those economies will be the last to raise rates again, leaving the yen and franc vulnerable as foreign interest rates start rising.

Fed to stay quiet on tapering

It’s been quiet in the forex arena lately, with the dollar pinned down by sinking US real rates and volatility being suppressed in general. The plunge in real US yields comes down to the interplay between inflation and Fed policy.

When inflation accelerates, markets normally start pricing in higher rates by the central bank to keep inflation under control. That hasn’t happened this time, as the Fed remains adamant this inflation episode will fade soon and is unwilling to even discuss an exit plan from cheap money policies. As a result, real (inflation adjusted) yields have crumbled, annihilating the dollar’s interest rate advantage. 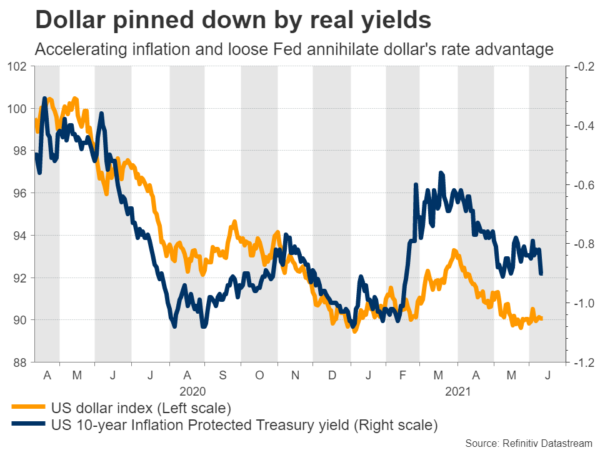 Another element that’s kept the dollar down has been the comeback in the euro. The Eurozone is in the middle of its ‘grand reopening’ amid widespread vaccinations, and this momentum has spilled over into economic data and the exchange rate itself.

The Fed is unlikely to change this narrative when it meets on Wednesday. American inflation keeps accelerating and consumption has recovered nicely, but the labor market is still far away from its pre-pandemic employment levels. The Fed is therefore hesitant to take its foot off the accelerator, making a discussion around an exit plan unlikely for now. 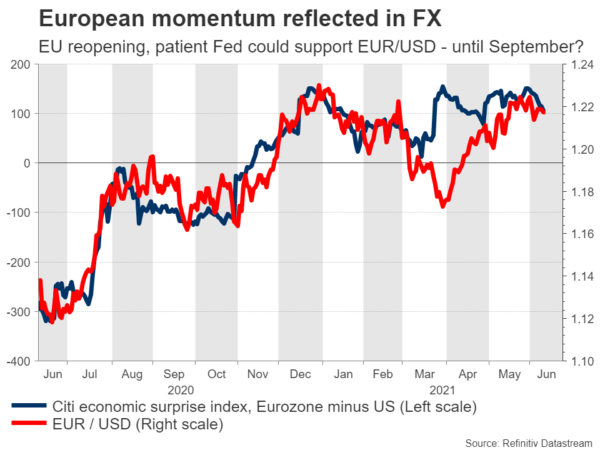 This dynamic could continue to support euro/dollar over the summer, as the European reopening kicks into full gear and the Fed remains patient. But everything might change by September. By then the US jobs market will be stronger given the monster spending packages and the Fed may be forced to taper, while European reopening momentum fades. Ultimately the Fed will normalize much earlier than the ECB, which points to longer-term pain for euro/dollar.

Ahead of the Fed meeting, US retail sales data for May will hit the markets on Tuesday.

The Bank of Japan will conclude its own meeting on Friday. No changes are expected, with the BoJ set to maintain its aggressive asset purchase program. While the global economy is recovering smoothly, the story isn’t so rosy in Japan.

The nation did an excellent job of handling the pandemic itself, with infections and deaths being far lower than most western countries, but its vaccination rollout has fallen behind. Reflecting that, the economy is still trapped in deflation and growth is sluggish.

This implies the BoJ will not be normalizing policy anytime soon, unlike several foreign central banks like the Bank of England or the Bank of Canada, which have already taken baby steps towards higher rates. That’s bad news for the yen. 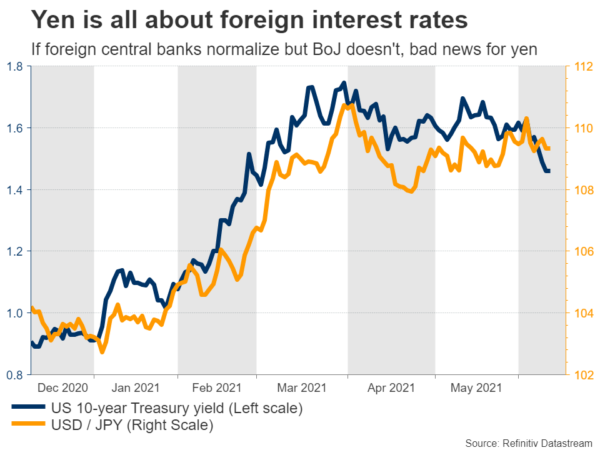 The yen lives and dies off of interest rate differentials, so if foreign yields are rising but the BoJ keeps Japanese yields pinned to the floor, the yen will probably suffer as rate differentials widen to its detriment. The risk to this view would be some market shock that fuels defensive demand for the yen, although even that might not be a game-changer.

It’s a similar story in Switzerland. The Swiss National Bank will wrap up its meeting on Thursday and will most probably keep rates at the lowest level globally. The economy is doing better, having recently escaped deflation, but the SNB is unlikely to get excited.

It will probably repeat that rates will stay low and that it will continue to intervene in the FX market to weaken the franc, a practice it has resumed lately as the currency started to gain ground. Like the BoJ, the SNB will be among the last central banks to raise rates over the next years – if at all. 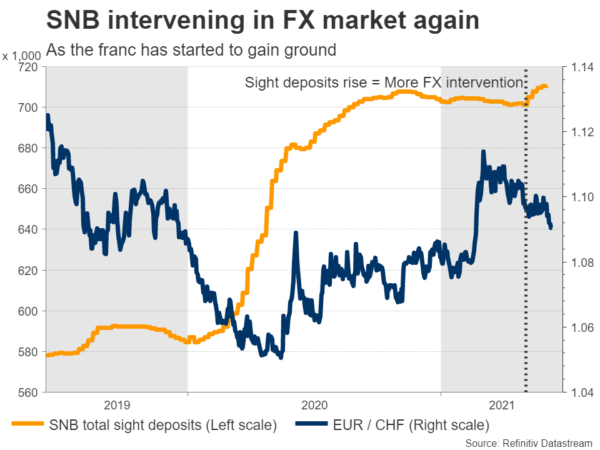 Overall, it’s incredibly difficult to be positive on the franc. Not only could it suffer from widening rate differentials and fading safe-haven demand, but the bulls will also have to fight the SNB at every step.

It’s a huge data week in Britain, with jobs numbers for April out on Tuesday, inflation stats for May being released on Wednesday, before retail sales hit the markets Friday. All this will be important in shaping the narrative around the Bank of England, which has started to move towards an exit from asset purchases.

The pound is currently enjoying the benefits of the economic reopening, yet there are a couple of risks on the radar too. Despite widespread vaccinations, the new Indian covid variant is spreading quickly and may delay the complete reopening of the economy.

Additionally, political risks have resurfaced as the EU is threatening Britain with tariffs for trying to violate part of the Brexit deal that covers trade with Northern Ireland. Investors haven’t taken notice yet, but they might if this conflict really escalates. 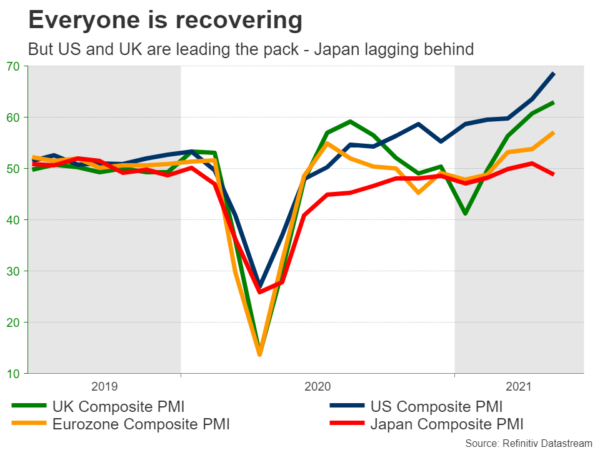 All told, the longer-term outlook for the pound remains favorable. These risks could spark a correction, but not much more. The economy is already almost fully operational so a minor delay wouldn’t hurt much, and sterling has absorbed negative Brexit headlines several times without much damage.

It’s a packed week for the commodity currencies too. In Canada, inflation data for May are out on Wednesday and could be crucial in determining how quickly the BoC will reduce its asset purchases.

In Australia, the minutes of the latest RBA meeting will hit the markets Tuesday, before the jobs report for May is released on Thursday. New Zealand’s GDP for Q1 is also due on Thursday, but it might be seen as outdated.

Finally, the monthly data dump from China is due Wednesday. Retail sales, industrial production, and fixed asset investment will tell us how the recovery progressed in May.

Dollar Turns to US Data Releases as Yields Spike