The wait is finally over. It is decision time from the FOMC at 19:00 BST. Are we going to get any tapering hints, or will the Fed remain characteristically dovish?

The markets of stocks have pulled back a bit, although the major US indices remain within touching distance of their record peaks with both the S&P and Nasdaq 100 hitting new highs yesterday. There is very little doubt in stock market investors’ minds that the Fed will even start talking about tapering, let alone actually doing it, even if the imbalance between the US economy and Federal Reserve policy has grown sharply with inflation being at 5%.

The US dollar, meanwhile, remains stuck inside a tight range after it found some pockets of strength here and there. But with bond yields holing near recent lows and stocks near highs, the dollar’s recent strength looks like it is driven mainly by short-covering. I wouldn’t be surprised if it resumes lower in response to what I think will be a dovish Fed policy announcement.

Indeed, many market observers reckon Fed Chair Jay Powell may wait until the Jackson Hole summit in August to signal a reduction in bond purchases. Any hints of taper at today’s meeting would therefore come as a surprise, which could see the markets turn volatile. However, if it is status quo then we should see the dollar come under renewed pressure.

Still, with inflation running at 5%, unemployment rate at 5.8% and GDP projected at 6.4%, the Fed will have to convince some sceptics that they know what they are doing.

The central bank is likely to point to the potential for slower rate of growth, fading impacts from fiscal stimulus and supply adjustments in bottleneck sectors as the reasons why inflation will start to decline in 2020.

Meanwhile, a bit like the British weather lately, consumer inflation in the UK came in much hotter than expected, rising above the Bank of England’s 2% target. CPI easily beat expectation on both the headline (2.1% vs. 1.8%) and core (2.0% vs. 1.5%) fronts and the pound responded appropriately, rising against all major currencies. These figures are in line with stronger inflation data we have seen elsewhere, such as the US, which is partially driven by temporary factors and base effects. Still policymakers at the BOE will come under pressure if inflation turns out to be sticky.

Given the hotter UK inflation data and optimism that we won’t go into further lockdowns amid vaccination success, the pound remains fundamentally supported. The GBP/USD pair may get a shot in the arm if the Fed turns out to be as dovish later on.

Technically, the trend is bullish as price rests on the rising trend line and comfortably above the 200-day moving average. Fresh buying momentum could come in if we see a breakout from the bull flag pattern to the upside. The next potential area of resistance comes in between 1.2200 and 1.2250, where the cable has previously struggled. Above this zone, there is clear blue skies until the next psychologically-important 1.45 handle, with some Fibonacci extension levels and round handles likely to provide interim resistance on the way to that target. 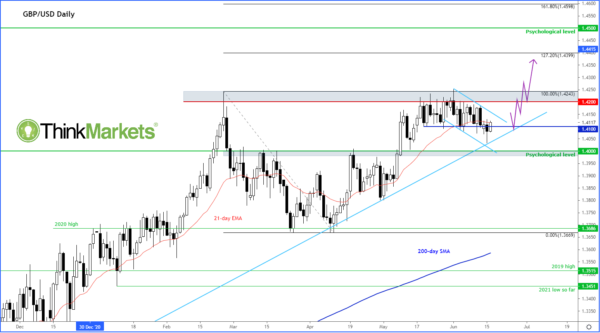