The Australian dollar has started the week with considerable gains. In the North American session, AUD/USD is trading at 0.7521, up 0.59% on the day.

The Australian dollar took a plunge last week, as AUD/USD declined by 2.95%. This marked the pair’s poorest weekly performance since September 2021. The Aussie was steamrolled after the Federal Reserve shocked the financial markets last week and brought forward its timeline for interest rate hikes.

The US dollar moved broadly higher against the majors after the FOMC shocker, and the Australian dollar was hard-hit, as it fell below the 75-level on Friday for the first time this year. Australia posted strong employment numbers to end last week, but this was not enough to curb the US dollar juggernaut. The greenback climbed on Friday, after Fed member John Bullard said that the Fed might have to raise rates in 2022 rather than 2023. Comments from Fed members are having a significant impact on US dollar movement, and investors are keeping a close eye on Fed member John Williams, who will speak at an event on Monday.

Australian Retail sales posted a negligible gain of 0.1% m/m in May, according to the Australian Bureau of Statistics. This missed the consensus of 0.4% and ended a streak of four straight readings above 1%. The weak reading was attributed to the lockdown in Victoria State. On an annualized basis, Retail Sales rose 7.4%, another indication that the economy has recovered nicely from the Covid pandemic.

With the Australian dollar falling massively last week, the currency was in oversold territory and was ripe for a rebound. This explains the Aussie’s strong performance on Monday, as the pair has pushed above the 75-level, which has psychological significance. 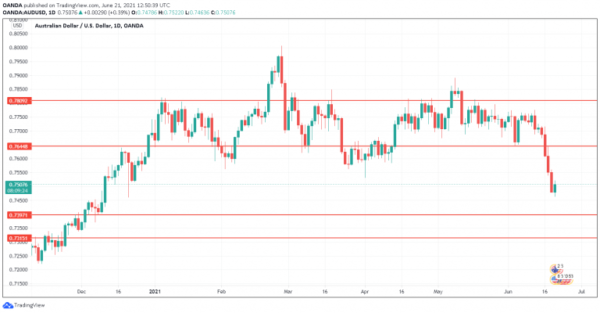