The Bank of Canada will announce its latest monetary policy decision on Wednesday at 14:00 GMT, which will be followed by a press conference by Governor Tiff Macklem at 15:00 GMT. With Canada’s economic recovery from the pandemic ticking along nicely, the BoC looks set to further scale back its bond purchases. However, looking at the Canadian dollar’s recent performance, it’s hard to tell that the BoC is the first major central bank to begin the tapering process. As worries about the latest escalation in virus cases weigh on the markets, can the Delta variant derail the Bank’s exit strategy?

Market pundits were already predicting that the Bank of Canada was on course to reduce its weekly bond purchases at the July meeting and after last Friday’s robust jobs report, they are even more certain. The Canadian economy added an incredible 230.1k jobs in June, and although it was a natural rebound given two months of steep declines in employment, it does nevertheless seal the deal for further tapering as early as the next meeting on Wednesday. 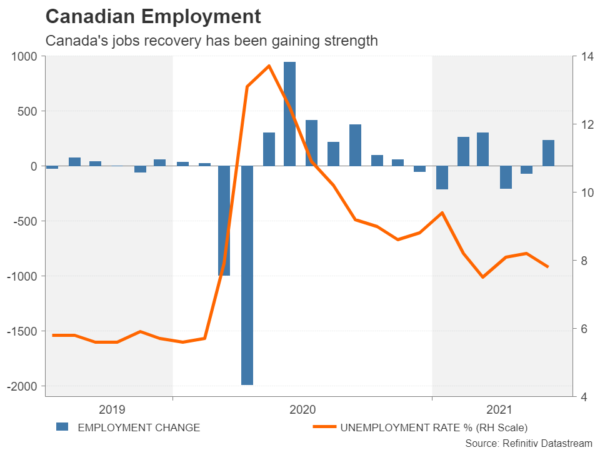 Policymakers last adjusted the pace of QE in April, slowing the weekly purchases from C$4 billion to C$3 billion. They will likely cut the weekly target again by another C$1 billion to C$2 billion. The outlook for the Canadian economy has improved markedly in recent weeks as the combination of falling infection rates domestically and internationally and subsequent easing of virus restrictions have jumpstarted the recovery, which had stalled earlier this year due to the winter surge in Covid-19 cases. 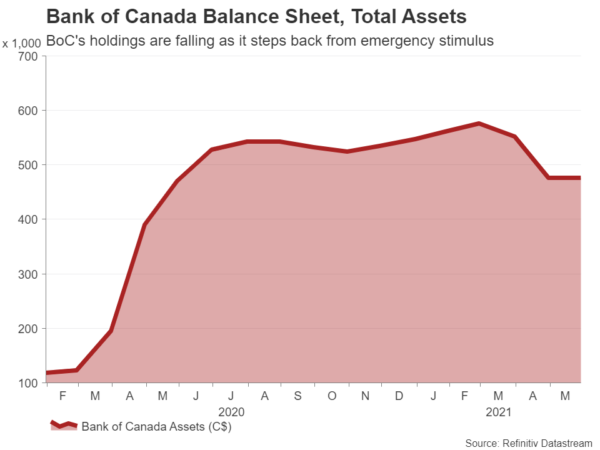 Whilst the virus threat is heightened again amid the new Delta variant, which is spreading extremely fast in many parts of the world, policymakers will probably point to the county’s impressive vaccine rollout as reason not to panic. After a sluggish start, Canada’s inoculation rate has now surpassed the United States’ and is only behind the UK among the big nations.

Moreover, the BoC’s own Business Outlook Survey published just a week ago painted a very bright picture regarding business sentiment and the broadening recovery. Hence, it’s difficult to see policymakers being too concerned about the possibility of the Delta variant wrecking all the optimism just yet.

If the BoC goes ahead and tapers for a third time, the loonie could firm towards the C$1.23 per US dollar level. The currency has pulled back substantially after hitting a six-year high of C$1.2002 to the dollar on June 1. For the bulls to take charge again, the 50-day moving average, currently near C$1.2213, needs to be reclaimed.

But that might be difficult to achieve unless the Bank surprises markets with a much more hawkish stance than anticipated. In particular, if policymakers hint in their quarterly projections that rates could rise in the first half of 2022, which would be earlier than the last estimate of H2, the loonie could soar.

However, should risk sentiment remain dampened by fears that the Delta outbreak will take the steam out of the global rebound in economic growth and safe havens like the US dollar stay elevated, the loonie might struggle regardless of what the BoC says or does this week. If the loonie’s slide extends towards C$1.2631, which is where the 200-day moving average is converging with the 23.6% Fibonacci retracement of the March 2020-June 2021 move, the short-term downtrend might become a longer-term bearish shift.