The Weekly Bottom Line: Covid Lessons from the UK

U.S. – Covid Lessons from the UK

It was a wild week for investors. Concern over the spreading Delta variant sent equity markets into a tailspin to start the week and the 10-year Treasury yield to rally below 1.2% – its lowest level since February. Almost as quickly as they fell, stock markets recovered over the remainder of the week. Risk-on sentiment also sent yields back up. As of writing, the S&P 500 was up 1.5% relative to last Friday and the 10-year yield had nearly round tripped to just shy of 1.3%. There was no obvious data catalyst for the rebound in risk sentiment, though the reported rise in both housing starts and existing home sales was a positive signal.

Led by the Delta variant, Covid cases are rising in the United States, but from low levels (Chart 1). In the United Kingdom, by contrast, cases are already at the highest level since December of last year. Fortunately, a relatively successful vaccination campaign has weakened the relationship with hospitalization rates, which remain a fraction of past peaks (Chart 2). Still, hospital admissions are rising and nearing levels last associated with tightened restrictions on activity. Even without a reversal in public health measures (only recently loosened), it is causing headaches for the economic recovery. People who have come in contact with an infected person have to self-isolate, leading to worker shortages and in some cases causing businesses to have to shut down for lack of employees. 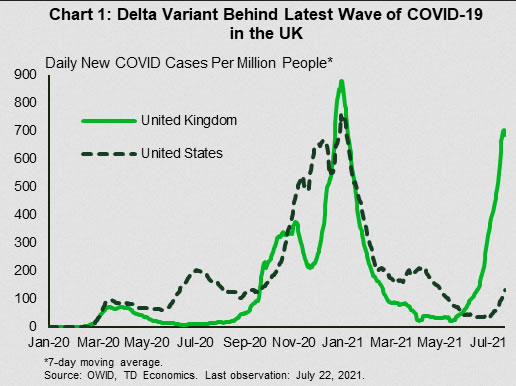 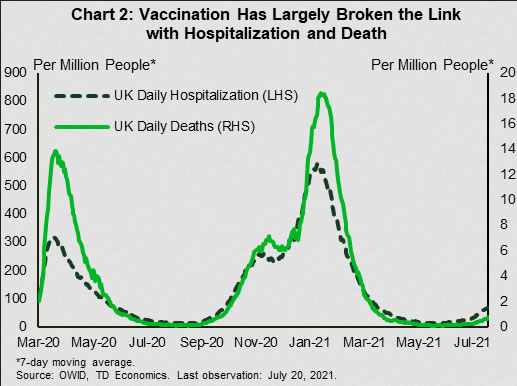 In the United States, cases are rising swiftest in southern states with the lowest vaccination rates. These are also states that were faster to remove public health measures and appear least likely to reimpose restrictions. Even so, labor supply issues, which are already an impediment to recovery, could worsen as a result of the spreading virus. Safety concerns are already contributing to worker shortages in high-contact industries such as leisure and hospitality.

The good news is that the American economy has shown its resilience to these challenges. Real GDP growth averaged 5% (annualized) over the fourth quarter of last year and first quarter of this one, as the last wave hit its peak.

Rather than reverse the economic recovery, the latest wave is likely slow what was otherwise expected to be a relatively rapid pace of growth. It has become increasingly evident that the main constraint on growth is not demand, but supply. Buoyant demand and slow supply explain the rise in inflation over the past several months. The bad news is that these constraints may last longer than they otherwise would have, making the run up in inflation less transitory.

The Federal Open Market Committee will certainly be pondering these speed bumps and their implications for inflation as it meets to set interest policy next week. Fed policy can do little to resolve supply constraints. While nervousness about the impact on demand is likely to keep monetary policy makers cautious as they debate normalization, the time to start talking about tapering is at hand. We expect Chair Powell to communicate as much during his press conference. As long as demand remains healthy, the pace of asset purchases is likely to slow before the end of this year.

This week was light on economic data, but heavy on financial market developments. All eyes were on the bout of risk-off sentiment that extended from late last week into Monday. Though somewhat uncertain, this was likely driven by concerns around the delta variant, some recent negative economic data surprises, and in some economies, central bank policy uncertainty. Despite this, markets swiftly brushed off Monday’s sell-off, with most risk assets rebounding quickly in the following days.

For Canada, the sell off included a downshift in the loonie and sizeable hit to oil prices (Chart 1). Both have since partially rebounded. While further volatility is always possible, we see little further sustained upside from current levels for either going forward. Last weekend saw OPEC+ producers reach agreement after a two-week long impasse. The group agreed to extend their deal until late 2022, and will start adding around 400k barrels per day (bpd) each month, starting in August. While markets are currently tight, this expected two million bpd increase in supply by year-end should cap any further sustained gains in prices. 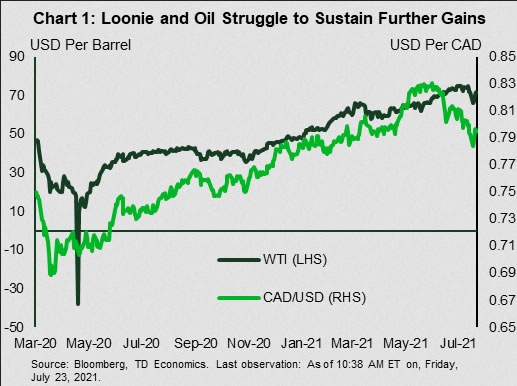 For the loonie, there are two factors at play. Several commodities had already peaked in the second quarter, with oil likely the latest to the party in the third. At the same time, the Bank of Canada has already begun tapering its asset purchase program and telegraphed a relatively more hawkish stance vis-a-vis the Fed. We suspect that the Federal Reserve will follow suit later in the year, lessening the likelihood of loonie outperformance based on expected interest rate differentials and central bank guidance.

On the economic data front, a backward-looking retail sales release revealed a 2.1% drop in May. Since then, restrictions have eased and vaccinations have ramped up. In turn, flash estimates for June point to a robust 4.4% rise in sales.

As is the case in most economies, inflation remains front and center, putting next week’s Consumer Price Index (CPI) release in the spotlight. On this note, Statistics Canada released its updated CPI consumption basket weights (Chart 2). The release was closely watched given the sizeable impact COVID-19 had on consumption patterns. For instance, shelter saw its weight in the basket rise from 26.9% to 29.8%, and household operations/furnishings saw an increase from 13% to 15.2%. Meanwhile, transportation saw a sizeable drop in its weight from 19.7% to 15.3%. The lingering question is whether these changes will have lasting power. Statistics Canada will now update the basket annually. This lessens the likelihood of any mismatch between baskets and consumption patterns. 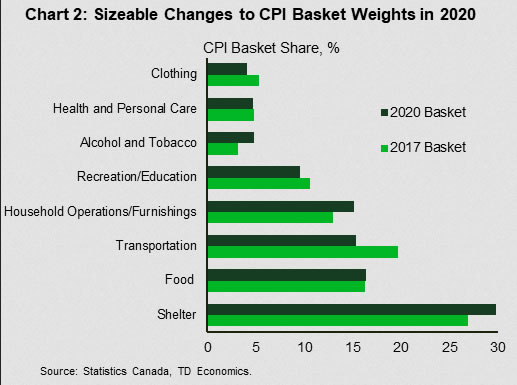 In terms of what it means for next week’s release, Statistics Canada has been publishing an adjusted CPI measure to reflect changes in consumption patterns, with the measure only slightly higher than headline CPI. The new weights will start being applied to the headline measure in June’s data. The resulting impact will likely be modest and will depend on offsetting forces of the categories witnessing the largest weight adjustments (transportation on the one hand, and shelter/furnishings on the other).