US Equities Shine Ahead Of Fed But Caution Prevails Elsewhere 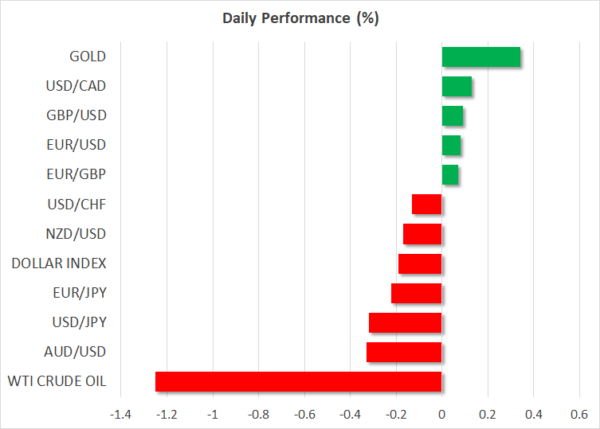 US stocks ride high; can anything spoil the fun?

Wall Street ended Friday in a euphoric mood as Q2 earnings continued to beat expectations, but trading has gotten off to a much more cautious start on Monday, with the Fed meeting high on investors’ agenda. All three leading indices finished the week in record territory, with the Dow Jones closing up 35,000 for the first time, while the S&P 500 shot above the 4,400 level.

The earnings season continues in earnest this week as all the Big Tech names are due to report, starting with Tesla today, followed by Apple, Microsoft and Alphabet tomorrow.

Nasdaq futures were outperforming on Monday, standing flat in early European trading amid strong optimism about tech earnings. But Dow Jones and S&P 500 futures were tracking the broader markets lower.

Worries about rising virus cases around the world and the subsequent toll on economic growth were heightened on Monday. Even the United States is seeing a fresh spike not just in infections but in hospitalizations as well, as the vaccination pace has ground to a halt lately.

Further roiling markets today are more signs of regulatory crackdown in China on locally listed tech companies, with Tencent becoming the latest victim after authorities’ recent assault on Didi. But the intervention is now widening to the education and property sectors, sending shares in Hong Kong and China into a spin, dragging the rest of Asia lower as well, with the exception of Tokyo.

Markets hoping for a dovish but optimistic Fed

The question now is whether the worsening outbreak of the Delta variant will eventually catch up with Wall Street. Throughout the pandemic, ‘buy the dip’ mantra has always generated a quick rebound from any panic selling, though US tech giants’ newfound status as defensive stocks has ensured that the dips haven’t been very steep. But lately, the appeal of non-tech US equities has also been growing, attracting funds from emerging markets in particular as, apart from stellar earnings, the American economy is increasingly being seen as the most resilient to further virus crises.

Whether the Fed is feeling quite as upbeat could be crucial as to how well the positive sentiment holds up. The Federal Open Market Committee (FOMC) meets on Tuesday and Wednesday to deliberate how soon the $120 a month in bond purchases should be dialled back. Although it’s unlikely policymakers will explicitly flag a tapering decision just yet, investors will be anxious to see how much further progress the Fed thinks has been achieved since the last meeting and whether the rampant spread of the Delta variant has affected the outlook.

Judging by which way Treasury yields were headed on Monday, the market doesn’t seem to be betting on a hawkish surprise.

The downside reversal in yields lifted gold, which is advancing above the $1,800/oz level. Aside from the surge in virus cases, concerns about the growth outlook have been exacerbated by the recent extreme rainfall in China and Europe, adding to safe haven flows. But there are geopolitical concerns at play too amid brewing Sino-US tensions over Taiwan.

The dampened outlook weighed on oil prices but boosted the Japanese yen, and to a lesser extent the Swiss franc. The US dollar, however, was marginally down on the day on a firmer euro and pound.

But the commodity-linked dollars were all weaker on Monday, led by the aussie.