What Does the German Election Mean for Markets?

With Angela Merkel stepping down as Chancellor, Germans will go to the polls on September 26 to elect her successor. The center-left finance minister Olaf Scholz has taken the lead, with Merkel’s CDU party and the Greens losing ground. German elections rarely rock the markets, but this time could be different as the Eurozone’s fiscal agenda hangs in the balance. A victory of the left coalition would likely enable heavier spending, lifting bond yields alongside the euro. That said, the overall trend still seems negative.

The German political map is about to be transformed. After 16 years of Merkel’s centrist rule and strict budget rules, a regime shift is now possible. No single party is likely to achieve a majority in parliament this time, so strategic alliances will have to be forged. This implies the winning coalition probably won’t be known for several days or even weeks.

Opinion polls have been all over the place but in recent weeks, the wind has been blowing in favor of the Social Democrats (SPD), led by Scholz. He has managed to charm voters with his strong credentials as an experienced statesman and crisis manager, having overseen the economic battle against the pandemic.

In second place is Merkel’s conservative CDU party, whose new leader – Armin Laschet – hasn’t resonated with the German public. His popularity plunged recently when he was caught on camera laughing after the deadly floods. The Greens had their moment in the sun back in May but have since fallen to third place. 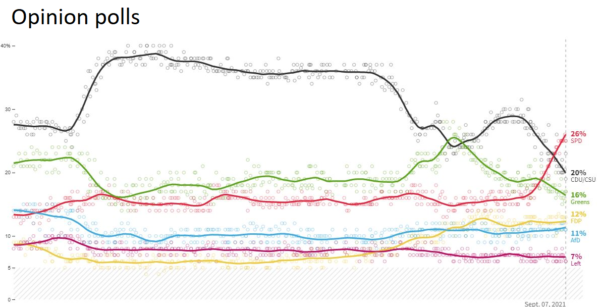 Each party has very different priorities. The Social Democrats want to expand worker rights and raise public investment, whereas the CDU is still advocating for balanced budgets and not adding to the debt. The Greens would push for massive investments in climate-friendly technologies.

Most importantly, both the Social Democrats and the Greens are open to a European fiscal union. In contrast, the CDU has been one of the main forces standing against this reform. The absence of a fiscal union is the Eurozone’s Achilles heel as it makes the region more vulnerable to shocks, so moving towards that would be great news for the euro.

There is a wide range of potential outcomes. The most likely is a coalition led by the Social Democrats, which includes the Greens and a smaller party like the pro-business FDP or the Left. Such a coalition would allow for greater investment both domestically and on a European level, boosting the economy and the euro in the process. That said, the stock market won’t be thrilled about the prospect of higher taxes. 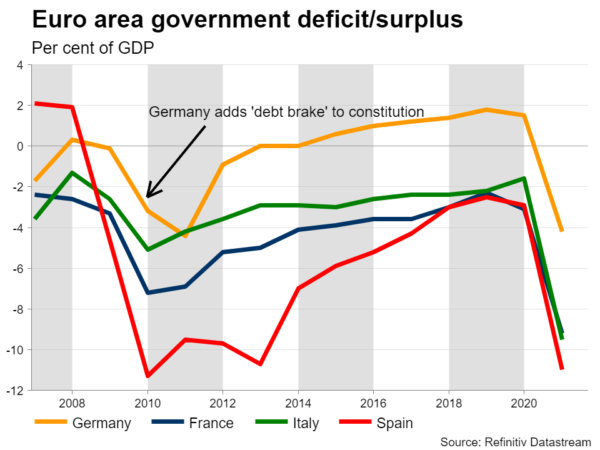 Another likely scenario is a CDU-led alliance with the Greens and the FDP. That would signal a continuation of conservative policies, with less spending and an eventual return to balanced budgets. In this case, bond yields could fall alongside the euro, although not much, as nothing would essentially change from recent years.

There are several other potential combinations, but those aren’t very realistic. No matter how you spin it, the Greens or the FDP will almost certainly be part of any alliance, making them ‘kingmakers’ of this election.

Options traders don’t think this will be a huge event. Implied volatility in euro/dollar is currently near 5% over the next one month, around the lowest it has been since the pandemic hit. That’s stunning because the coming month also includes the Fed’s September meeting. 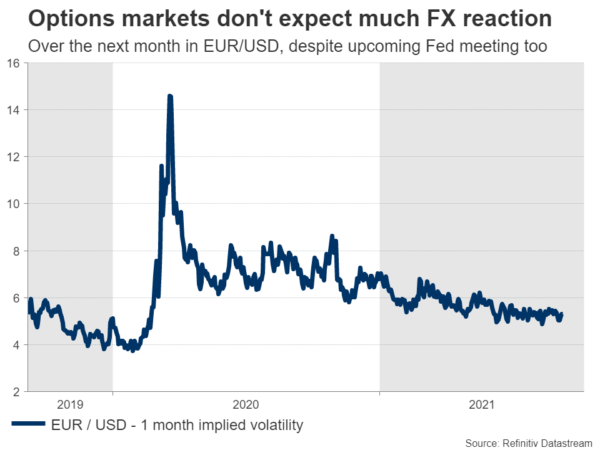 Still, the outcome will be crucial for European economic policy and if the next government is controlled by center-left forces, the euro could get a boost. A German government that promotes investments to fight climate change would inevitably set the stage for similar moves at the EU level.

On the flipside, a coalition of center-right parties would advocate for a return to budget discipline. The crisis allowed for a suspension of the strict deficit rules until next year, but there isn’t any appetite among these players to extend that. If Germany returns to ‘black zero’ budgets, there would be pressure on other EU countries to follow, slowing the recovery. 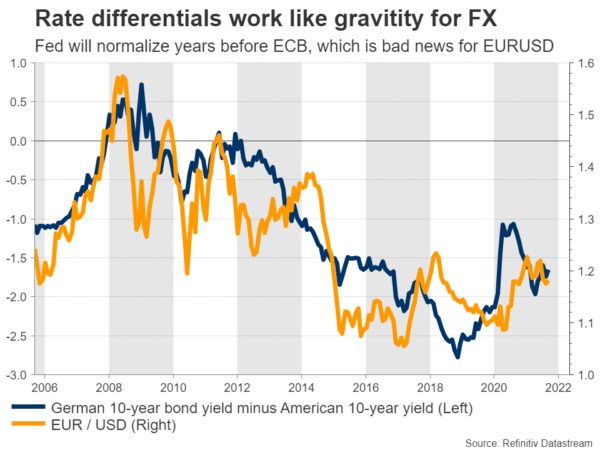 All told, there is greater scope for a positive reaction in the euro considering the latest polls. Even so, that’s unlikely to change the overall negative trend. Any serious spending increase is a longer-term story, and in the meantime, the euro will have to grapple with monetary policy divergence as other countries raise interest rates but the ECB doesn’t.

The game changer for the single currency would be a real push towards more European integration – a capital markets union, a banking union, and ultimately a fiscal union. Unfortunately, that won’t happen anytime soon no matter who rules Germany.