The latest headlines out of China haven’t been particularly encouraging. The country’s power outages appear to be worsening, supply shortages and soaring prices are stifling businesses, regulatory crackdowns are on the up, and the Evergrande debacle is about to send shockwaves through the property sector, if not the entire economy. The manufacturing PMIs for September due on Thursday will therefore be attracting a lot of attention as concerns grow about a major slowdown in the world’s second largest economy.

Manufacturers’ boom times may be over

China’s manufacturing sector has been showing signs of stress for some time now, losing momentum at the end of 2020, even before the latest troubles came to the surface. The official government manufacturing PMI has been steadily declining since April and is on the verge of slipping below 50, which separates expansion from contraction. It stood at 50.1 in August and is forecast to stay unchanged in September when released at 01:00 GMT on Thursday. 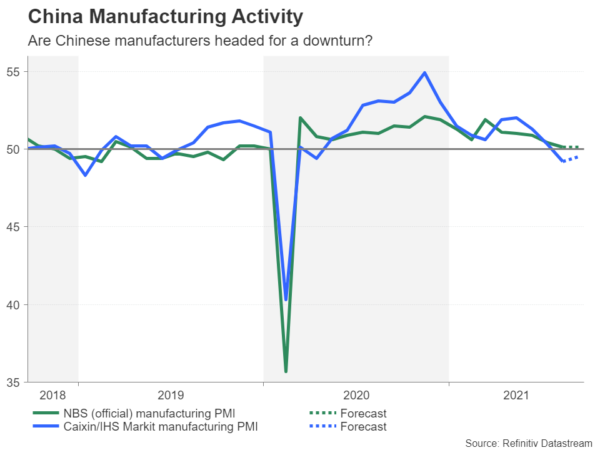 The Caixin/Markit manufacturing PMI will follow 45 minutes later and is expected to show a small improvement. The private survey has already dipped below the critical 50 level, falling to 49.2 in August. But analysts are predicting a slight pickup in September to 49.5.

Energy crisis could be bigger than Evergrande

Should the September figures disappoint, this could ring alarm bells for investors already on edge about the fate of Evergrande – China’s heavily indebted property giant. But with some signs that Chinese authorities are working behind the scenes to try and contain a wider market fallout from Evergrande’s debt crisis, there’s now another worry for investors.

Power outages across the country are spreading, inflicting not only businesses but also households. Much of the problem, though, is the government’s own making. Factories ranging from aluminium smelters to soybean processing plants to chemical plants are under instructions to ration electricity so that provincial authorities can meet their emissions targets. The government has enforced tough emissions curbs to rein in pollution ahead of the Beijing Winter Olympics in February.

Meanwhile, a ban on Australian coal imports over a trade dispute is exacerbating the commodity’s shortage, crippling power producers that also have to contend with surging natural gas prices. All this comes against a backdrop of broader supply bottlenecks and shortages that are pushing up factory prices, as well as a series of crackdowns by regulatory authorities, mainly targeting the tech sector.

Potentially making matters worse, Evergrande – China’s largest real estate developer – is on the brink of collapse and a full state bailout is looking unlikely. This means it’s almost certain there will be significant repercussions on the construction industry and the financial system even if the government were to try and ease the pain from a restructuring of Evergrande’s massive debt.

Aussie at risk from China slowdown

The Australian dollar, which is considered a good proxy for China-related trades due to Australia’s dependence on Chinese demand for its exports, has been somewhat undermined lately by the negative newsfeed, though it has yet to have a major wobble. That could change in the coming weeks if businesses begin to buckle under the weight of all the aforementioned headaches. Thus, traders will likely be sensitive to possible warnings coming from Thursday’s PMIs.

Aussie/dollar is currently struggling beneath its 50-day moving average (MA) and a rise above it would be difficult without a substantial improvement in risk appetite. The early September peak of $0.7477 looks even more like a distant memory. A worrying set of PMI indicators out of China could push the pair below the 78.6% Fibonacci retracement of the November 2020-February 2021 downtrend at $0.7208 and towards the 9½-month low of $0.7104 from August 20.