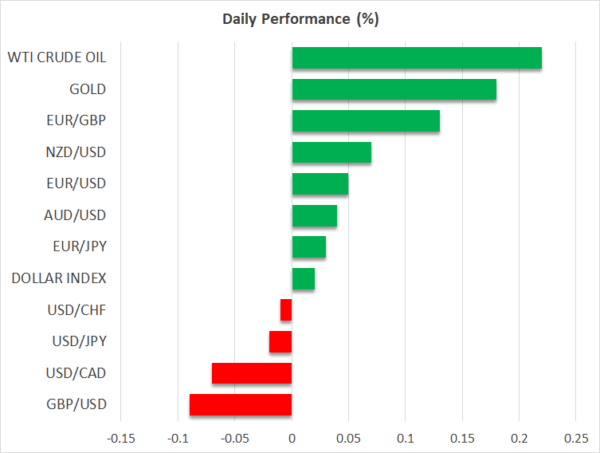 A powerful recovery in bond yields across the world is inflicting some serious damage on the Japanese yen. The Bank of Japan’s yield curve control strategy essentially keeps a ceiling on Japanese yields, rendering them unable to join the global rally and making the yen less attractive as interest rate differentials widen against it.

Global yields have been propelled higher by expectations for stickier cost inflation, with supply chains in disarray and energy prices going berserk. Investors are betting central banks will eventually respond by raising rates to tame inflationary forces. But the BoJ will probably be the last one to do so given Japan’s chronic battle against deflation. The nation’s heavy reliance on energy imports also dims the outlook for growth.

Even the nervousness in equity markets couldn’t stop the bleeding in the yen, which is generally seen as a safe haven. Looking ahead, the outlook remains negative in an environment of monetary policy divergence between Japan and most major economies. Carry trades are coming back into fashion and the yen is the market’s favorite funding currency.

The saving grace for the Japanese currency would be some massive shock that sparks panic in the markets and pushes investors back into bonds for safety, calming yields down. However, this doesn’t seem likely since most of the risks facing markets are linked to inflation and higher rates.

Stock markets started the week on the wrong foot. From paralyzed supply chains to an energy crisis that threatens to cripple Europe and Asia to growing credit risks in the Chinese property sector, there are several threats on the radar forcing traders to play defense.

It’s a perfect storm. Supply chains seem overwhelmed, with disruptions spilling over from ports to the mainland lately amid lorry driver shortages, squeezing corporate profit margins as transportation and energy costs soar simultaneously. This burden could be passed onto consumers, taking a bite out of real incomes.

The fear is that global growth slows down as companies can’t cover demand but inflation remains hot thanks to cost pressures – a toxic combination that central banks are powerless against. And with the fallout from Evergrande spreading across the Chinese property market with more developers missing debt payments, there is a dimension of credit risk as well.

That said, this isn’t a catastrophe either. Growth is unlikely to slow enough to turn this into another recession and investors remain fairly confident that any credit events in China will remain isolated. Hence, there is light at the end of the stagflation tunnel, although it’s too early to call for the bottom ahead of an earnings season that will likely echo worries around growth and inflation.

In the broader FX arena, sterling remains caught in limbo, incapable of capitalizing on mounting bets that the Bank of England will raise rates this year. British inflation expectations have skyrocketed, signaling that this inflation episode will be persistent as the UK is suffering more acute supply disruptions than most economies.

Markets are saying the BoE will respond by raising rates, but central banks can’t fix broken supply chains, so there is a risk this will be a policy mistake that simply chokes the recovery. As for the pound, the BoE is already priced very aggressively, so the currency’s fortunes now hang mostly on how risk sentiment fares.

Meanwhile, euro/dollar remains heavy. The picture still seems negative amid Fed/ECB divergence, safe-haven demand for the dollar, and the American economy escaping a global slowdown with only minor injuries thanks to its self-sufficiency on energy. 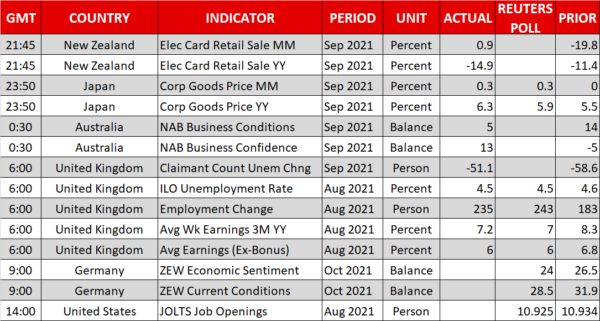