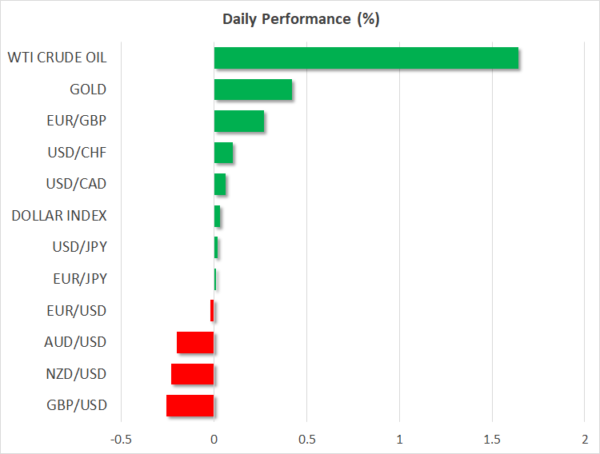 The messaging was clear, or so everyone thought. Repeated signalling by Bank of England Governor Andrew Bailey that the Bank will need to act to keep a lid on surging inflation had led markets to price in at least five rate increases over the next year. However, the BoE badly wrong-footed markets on Thursday by holding fire on rates, with policymakers wanting to wait and see how the labour market would respond to the end of the UK government’s furlough scheme.

Bailey told reporters in his press conference that the decision was “a very close call”. But the MPC vote suggests otherwise. Only two committee members voted in favour of raising rates at the November meeting, which not just cast doubt on the BoE’s credibility but also suggested that a rate hike in December was unlikely, even as the statement flagged that an increase in the Bank Rate “will be necessary over coming months”.

Investors sharply repriced their bets on how aggressively the BoE would tighten policy, though with close to four rate hikes anticipated in 2022, the main adjustment was for policy holding steady in 2021. There’s a risk that markets are still expecting rates to rise by more times than what policymakers are pencilling in because the BoE’s forecasts were conditioned on energy prices not falling by as much as what futures curves are implying. If energy prices were to drop off more steeply than in the Bank’s central projection, UK CPI is predicted to fall substantially below the 2% inflation target at the end of the forecast period.

The pound reacted the only way it could, shedding 1.5% at its lowest point when it plummeted below the $1.35 level, having traded just beneath $1.37 earlier in the day.

But the aftershocks of the BoE’s actions weren’t confined to the FX sphere. The yields on UK gilts nose-dived, particularly two-year yields, and it was a similar trend across the bond market. Bond yields had already been under pressure since Wednesday when both the Fed and ECB pushed back on speculation of pre-emptive rate hikes to fend off spiralling inflation.

With the major central banks holding firmly to the narrative that the current inflationary episode will be transitory, sovereign bonds are rallying, lifting stocks but weighing on the riskier currencies.

The commodity-linked dollars have all dipped to around three-week lows against both the US dollar and the low-yielding Japanese yen. The euro’s fall has been milder in comparison but remains distinctly on the backfoot.

The Canadian dollar would probably also have been able to get off more lightly if it wasn’t for the slide in oil prices. As expected, OPEC and its allies yesterday decided to maintain the existing pace of phasing out the supply curbs, boosting output by only 400,000 bpd.

Oil futures initially rallied but reports that Saudi Arabian output could soon hit 10 million bpd and fears that the United States might tap into its strategic reserves in response to OPEC’s refusal to pump more oil pulled prices lower.

Will there be a positive NFP surprise this time?

As yields pull back, there is now an increased risk of a reversal should today’s jobs numbers out of the US beat the consensus estimates. After two back-to-back disappointing reports, the US labour market is expected to have picked up a gear. Nonfarm payrolls are forecast to have risen by 450k in October.

Although the data is unlikely to have much of an impact on the Fed’s policy outlook as tapering has already started and rate hikes are not on the immediate horizon, it could jolt US Treasuries, which in turn would move the dollar.

The greenback is creeping up towards last month’s one-year top against a basket of currencies in spite of the Fed’s dovish taper announcement this week as investors remain more optimistic about the American economy than its peers.

The only way is up for stocks

As for equities, the S&P 500 and Nasdaq 100 appear to be headed for another open in record territory following yet more fresh all-time highs on Thursday, while the Dow Jones took a breather from the recent winning streak. European stock markets are also riding high as the dovish central bank talk is boosting equities on both sides of the Atlantic, underlined by the retreat in bond yields.

However, shares in Asia were struggling on Friday amid renewed concerns about China’s heavily indebted property sector after another major property developer missed a payment on a wealth management product. 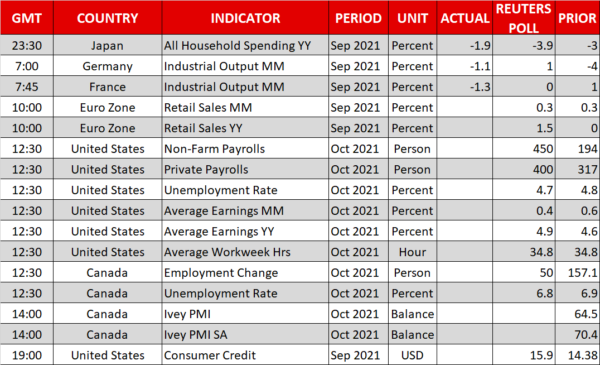