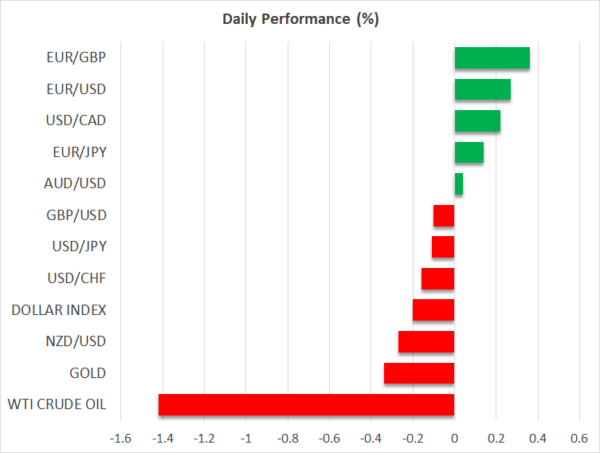 The White House announced yesterday that Jerome Powell will get a second term as Fed Chair, while Lael Brainard will be promoted to Vice Chair. Even though the decision was as expected, the news still caught markets by storm, propelling the dollar higher as traders doubled down on bets for faster tightening.

Markets have now fully priced in three rate hikes for next year starting in June. For that to happen, the Fed would need to accelerate the pace of tapering, something that senior officials including current Vice Chair Clarida have indicated they are open to. This will probably be a hot topic at the December FOMC meeting.

It is becoming clearer that the Fed can no longer afford to be patient. Inflation is scorching hot, consumption is booming, the labor market seems tight by several metrics, business surveys point to a powerful spell of growth ahead, and Congress is about to bring more spending to the party.

With the prospect of accelerated tapering in play, the dollar could continue to rule over the FX arena, especially while the euro grapples with new lockdowns. But with the Fed now ‘fully priced’, the risk is the US virus situation. If restrictions return to America too, the reserve currency might lose some of its shine as markets revert back to pricing two rate hikes for next year.

The market reaction reflected the view that Powell is likely to step on the policy brakes harder than Brainard. Yields spiked higher across the curve, with short-term rates rising faster, which cooled inflation expectations a little.

Equity markets didn’t enjoy this cocktail. It was a classic case of rising rates making stocks less attractive, with unprofitable or ‘richly valued’ shares taking the sharpest hit as higher yields decrease the present value of their future cash flows. As such, the tech-heavy Nasdaq lost more than 1%.

To be fair though, stocks have been remarkably resilient considering just how much central bank tightening has been priced into bond markets. This is likely a testament to the unstoppable force of corporate buybacks, which are headed for a record year.

Gold was the biggest victim of the Fed leadership news, suffering at the hands of rising real yields and a rampaging dollar, with some large option expiries scheduled for today likely adding fuel to the selloff. Bullion’s fate now hangs on whether the Fed will speed up tapering, which in turn will depend on the virus trajectory in America.

The euro got some much-needed relief after the latest Eurozone PMIs pointed to a slight improvement in business activity. However, these surveys were mostly conducted before the new wave of covid restrictions rocked Europe, so next month’s data are unlikely to be so cheerful. Markets are still pricing some chances of a minor ECB rate hike next year. That’s quite unrealistic and a repricing could spell more pain for the battered euro.

Finally, PMI surveys will also be released in the UK and America today. Beyond those, the spotlight will fall on the Reserve Bank of New Zealand, which concludes its meeting at 01:00 GMT Wednesday. A rate increase is almost certain as the nation’s economy is on steroids – the real question is whether it will be a ‘single’ or a ‘double’ hike. 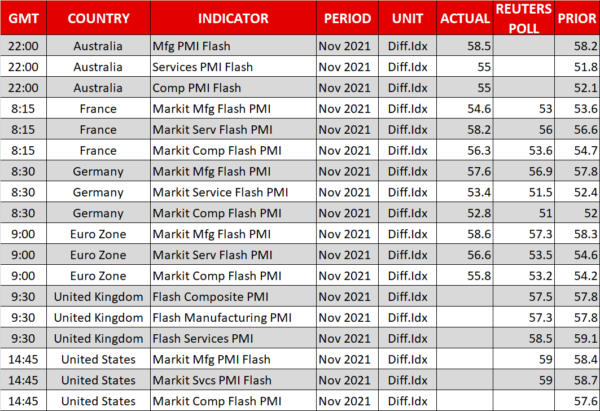