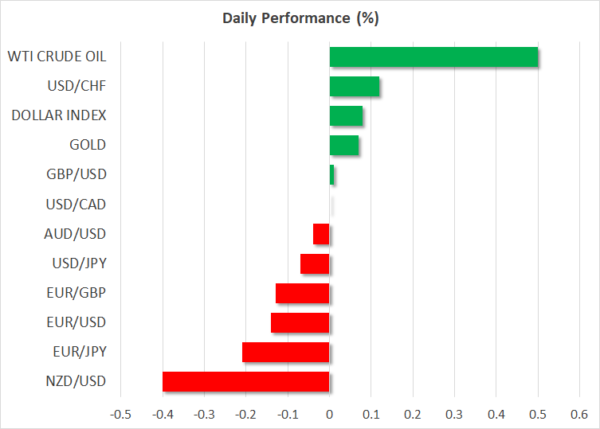 After weeks of speculation, the United States announced that it will release 32 million barrels of crude oil from its strategic reserves to counter the supply deficit in energy markets and cool prices. Several other nations have joined this effort, but their combined contributions will amount to less than what America is releasing alone.

Energy traders made a mockery out of this move, pushing oil prices much higher once the news rolled in. Releasing around 50 million barrels is a drop in the ocean for a global economy that consumes almost double that every day, and could even backfire by making OPEC hesitant to raise its own production or discouraging smaller players from drilling.

In other words, releasing half a day’s worth of global consumption from storage isn’t a real solution. What has brought oil prices here is chronic underinvestment in an industry that was left for dead, so the fix would be more drilling and production, which requires higher prices for longer to incentivize. As the old adage goes: ‘the cure for high oil prices is high oil prices’.

Another lever the White House can pull is striking a nuclear deal with Iran and relaxing the sanctions that have crippled the nation’s oil exports. Those negotiations will resume next week and Iran now holds a lot of leverage.

The major currency pairs have been relatively quiet, with the overwhelming theme of dollar strength still coursing through the veins of the FX market. Dollar/yen briefly touched a new multi-year high today before pulling back, while Cable fell to its lowest in almost two years yesterday but rebounded.

Several events will test the dollar’s supremacy today. The latest FOMC minutes will be dissected for any clues as to whether the tapering process could be accelerated after senior Fed officials floated the idea lately. There’s also a barrage of data releases including durable goods orders, the second reading of GDP for Q3, and the Fed’s favorite inflation metric.

In the stock market arena, it was a mixed session as traders continue to grapple with the fallout of rising bond yields. While the major indices on Wall Street haven’t retreated much from their record highs, under the hood there’s been a massacre in cash-burning or barely profitable companies.

Investors are essentially moving higher along the quality spectrum, slashing their exposure to shares with bloated valuations that could get decimated if real yields move any higher. Today is the last full trading day before the Thanksgiving holiday, so volatility could remain elevated amid some position squaring and de-risking ahead of the long weekend.

The Reserve Bank of New Zealand raised interest rates by 25 basis points overnight, but the kiwi fell in the aftermath as the central bank disappointed those looking for a ‘double’ hike. Market pricing around future hikes is now exactly in line with the RBNZ’s own forecasts, both expecting around one rate increase per meeting for the next year.

The Turkish lira has been blown to smithereens, losing 12% of its value against the dollar yesterday to bring its total losses for this month to a shocking 30%. FX reserves are already depleted and the nation’s president, who essentially runs the central bank, refuses to raise rates to fight runaway inflation.

At this point, it might take a leadership change or capital controls to stop the lira’s avalanche. 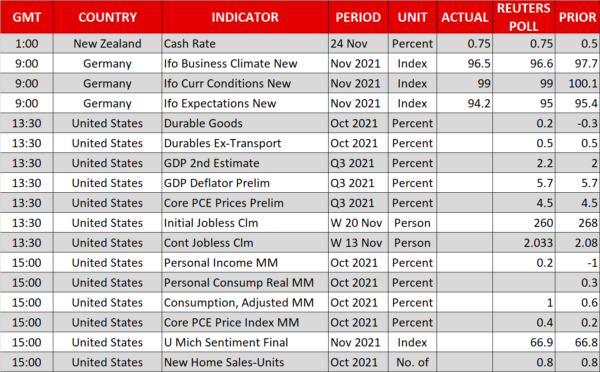