The newly discovered Omicron variant of the pandemic knocked the markets off-balance on Friday as it renewed the uncertainty in the markets. Safe haven currency JPY gained against the USD before correcting somewhat during today’s Asian session while also the USD was on the retreat on Friday. At the same time commodity currencies such as the Aussie, the Loonie and the Kiwi tended to be on the retreat given the worries for a possible deterioration of international trading terms and a slowdown of global economic recovery. Gold prices tended to edge higher as the USD seemed to retreat yet may have also gotten some support by the appeal provided by the uncertainty in the markets and the drop of US yields on Friday. Prices of oil tended to tumble as worries for the demand side of the commodity surfaced. OPEC was to reach a decision in the coming days about oil production levels of the coming months yet given the new uncertainty posed by the pandemic, it may be delayed to evaluate any possible repercussions, as per media. US stockmarkets also were on the retreat with Dow Jones leading the way lower, as risk off sentiment took over. Overall we expect financial releases today and early tomorrow could affect the markets, yet they still have to recover from Friday’s shock. Reports tend to show that there is high transmitability yet mild symptoms for the Omicron variant which could ease market worries. Overall, markets seemed to recover some of their confidence during the late American session and today’s Asian session, however uncertainty seems to be still present. Fundamentally the risk off mood which dominated on Friday could be reversed, yet the measures which were decided or are still to be announced by various countries, could keep markets worried for the recovery of the global economy maintaining a cautious stance by investors.

USD/JPY extended its drop on Friday breaking the 113.70 (R1) support line, now turned to resistance, yet corrected higher but remained below the R1. The bearish sentiment may have not spoken its final words yet, as the RSI indicator is at low levels, yet some stabilisation signs are present. Should the selling interest for the pair be renewed we may see the pair aiming if not breaking the 112.75 (S1) line. If the correction higher is extended, we may see pair breaking the 113.70 (R1) resistance line and aim for the 114.45 (R2) level.

AUD/USD continued to drop breaking the 0.7170 (R1) support line now turned to resistance. We maintain a bearish outlook for the pair as long as it remains below the downward trendline incepted since the 2nd of November. Should the bears actually remain in charge of the pair’s direction we may see AUD/USD breaking the 0.7105 (S1) support line and aim for the 0.7045 (S2) level. If the bulls take over, AUD/USD could break the prementioned downward trendline, the 0.7170 (R1) resistance line and aim for the 0.7230 (R2) level. 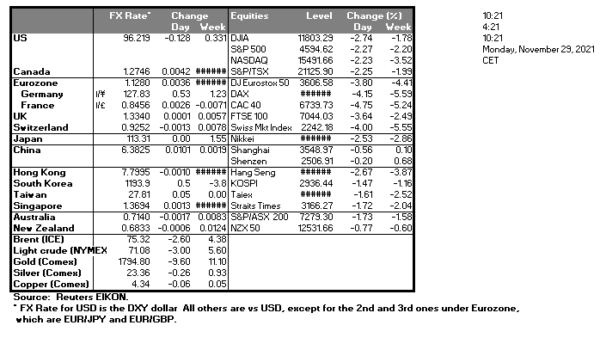 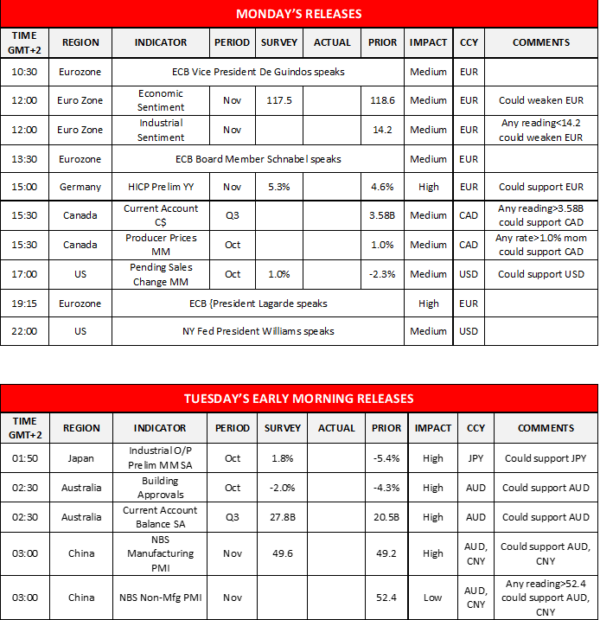