Action Forex
HomeContributorsFundamental AnalysisForward Guidance: Bank of Canada and Omicron Risks in the Spotlight Next...

Forward Guidance: Bank of Canada and Omicron Risks in the Spotlight Next Week

Virus concerns and inflation will loom over the final scheduled Bank of Canada policy decision of 2021. So far, economic data has been tracking close to the central bank’s expectations. The 5.4% (annualized) increase in Q3 GDP was almost bang-on with the 5.5% forecast in its October policy update. And though inflation is still running well above the central bank’s target, it’s broadly in line with the 4.8% Q4 CPI increase expected as of the October MPR. But labour markets have continued to improve with a much stronger than expected 154,000 jobs added in November, and at 6%, the unemployment rate is falling back closer to pre-pandemic levels.

The emergence of the Omicron variant has rattled financial markets and is a reminder that the pandemic is still not over. Inflation has also moved higher, labour markets look increasingly tight, and wage pressures are building. Demand and purchasing-power are not expected to be an issue with the household pandemic savings stockpile ballooning to nearly $300 billion as of Q3. Businesses are largely identifying labour shortages and higher input costs as more significant concerns than any shortfall in orders. The BoC might still be able to point to pockets of weakness in labour markets—long-run unemployment is still elevated, for example. But arguments to keep policy interest rates at emergency low levels are getting thin. The BoC is expected to reiterate that, barring significant further disruptions from the new virus variant, the economy is on track to fully recover by mid-2022, and that interest rate hikes will be warranted at that point. We expect the first rate hike next year to come in April. 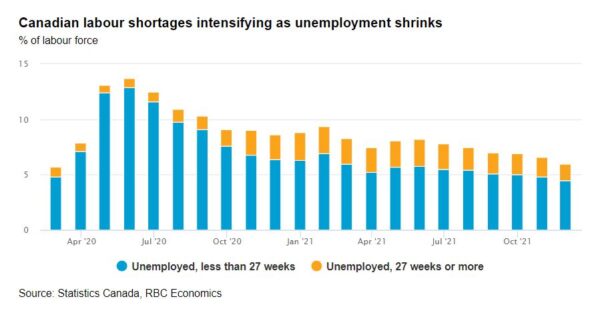 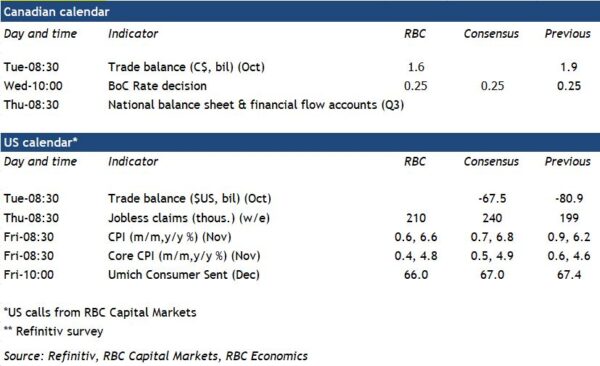