Volatility was the name of the game this week as markets whipsawed on news of the Omicron variant’s identification in the U.S., and Chairman Powell’s more hawkish stance. Inflation remains front and center as Chairman Powell retired the term “transitory” when describing recent price gains. That said, November’s data offered signs that supply chains challenges have begun to ease, offering some promise of inflation relief.

This week’s release of November’s ISM manufacturing survey gave one such signal. The report showed growth accelerating as the expansion carried on for its 18th consecutive month. The details provided further reasons for optimism. The supplier delivery times subindex remained extremely high (you have to look back to the late 1970’s to find a comparable lead time prior to the pandemic), but it pulled back for the first time in three months (Chart 1). Alone, this move doesn’t mean much, but the production, employment, and new orders indexes also all moved higher in November. An environment where production, orders, and employment growth are increasing while supplier delivery times are narrowing is a signal that some of the bottlenecks we’ve been seeing are beginning to clear. 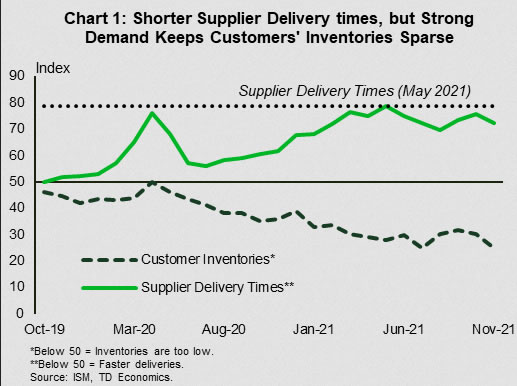 Alas, not all of the news was good. Customer inventories continue to languish at low levels and the index pulled back on the month. This is likely a reflection of continued strong demand that has left producers trying to keep up. Indeed, this month’s vehicle sales report was a reflection of those tight conditions, as monthly sales disappointed, falling to 12.9 million units (at a seasonally adjusted annualized rate). Automotive production ticked up in October, but remains well below underlying demand, which is likely closer to 1.45 million per month. This means inventories will remain scarce for the time being.

At the same time, this week’s payrolls report showed a slowing in the pace of job growth. Markets had expected north of 500k jobs to be added to payrolls, so the 210k realized in November missed the mark.

Despite the disappointing print in the payrolls report there were several reassuring details in the household survey. Household employment increased by 1.1 million people, taking the employment to population ratio up to 59.2%, and continuing its steady improvement. An additional million people working is a good sign, but the increase in the labor force participation rate is another welcome sign for the supply side of the economy (Chart 2). To alleviate reported labor shortages the number of Americans active in the labor market has to increase, and nearly 600 thousand added their names to the hat in November.

This year has been characterized by ample demand and a virus-induced supply shock that has pushed inflation to multi-decade highs. November’s data started showing us signs that the supply side of the economy has begun to recover. The data are reassuring for now, but the emergence of the Omicron variant could derail the fragile improvements that have been made. Even without lockdowns in the U.S., restrictions in less vaccinated nations, or worker fears of infection, could pinch the supply of inputs and labor, pushing prices higher.

Financial markets remained volatile this week amid uncertainty about the impact of the Omicron variant. New data seem to suggest that Omicron is more infectious and three times more likely to cause reinfections, but it is unclear if it causes more severe illness or is more likely to evade the vaccines. Given the rapidly evolving situation, equity markets seesawed throughout the week, with the TSX 1.9% lower relative to last Friday (as of writing). Omicron worries also kept a lid on oil prices, with WTI trading below $70/barrel throughout the week. Crude prices were further pressured by the OPEC+ decision to boost oil output by 400,000 barrels a day in January.

Luckily, the GDP and employment data released this week were upbeat, offering respite from the Omicron-induced drama. Following a slump in Q2, made worse by the negative revisions (-3.2% versus -1.1% previously), GDP rebounded smartly in the third quarter, advancing by 5.4% annualized (Chart 1). This left output just 1.4% shy of its pre-pandemic level. Growth was fueled by consumer spending, which rose 18% (annualized) as provinces lifted restrictions. Demand was especially strong in areas hardest hit by the restrictions, with consumers rushing to spend more on services (such as travel and dining out) and semi-durable goods (such as clothing). 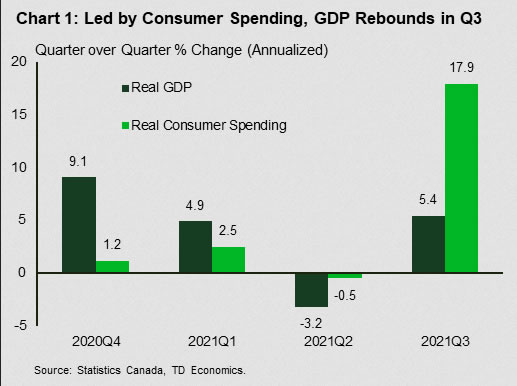 Growth would have been even stronger if not for global supply chain woes, which contributed to declines in durable goods spending (due to lower car sales) and business investment. Residential investment also pulled back as new construction and renovations dropped Chart two shows the Canadian employment and participation rate for Canadians between ages of 15 to 64. The chart highlights the recovery progress in the Canadian labour market over the last two years. In particular, the employment in November of 2021 has surpassed its pre-pandemic February 2020 level by 1%. The participation rate among this age group was 80 basis points higher than in February of 2020.

The job market also delivered some pre-holiday cheer this week (Chart 2). The labour market took a big step forward, with employment rising by 154k in November. The gains were about evenly split between full-time and part-time positions, and were led by the service sector industries, which added 127k new jobs. The rise left employment 1% above its pre-pandemic level and pushed the unemployment rate down 0.7 percentage points to 6.0%, with a noticeable drop in the number of long-term unemployed. The good news didn’t end there. Total hours worked increased 0.7%, returning to its pre-pandemic February 2020 level for the first time. 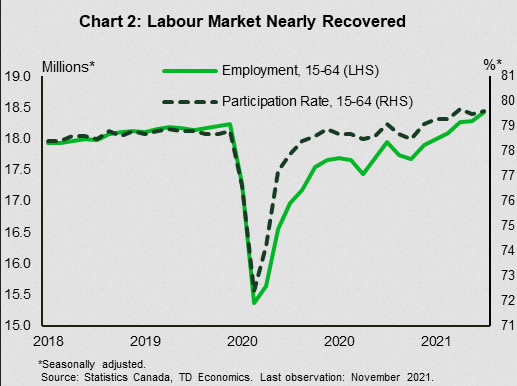 November’s jobs report will be impossible for the Bank of Canada to ignore. Throughout the pandemic, the Bank emphasized it would keep the overnight rate low until the labour market recovery was complete. We’re nearly there – the unemployment rate is almost back to where it was in February 2020. Given tighter labour market conditions, stronger price pressures, and hot housing market activity, we can’t discount the possibility the Bank will hike rates as early as January. Uncertainty with respect to the new Omicron variant is elevated, but barring any significant negative developments, there could be more hawkishness in store in next week’s Bank of Canada statement.