The Australian dollar has reversed directions on Wednesday, as the currency trades around 0.7130. We could see some volatility from the currency following the releases of the FOMC policy decision and Australian employment data.

FOMC in the spotlight

All eyes are the FOMC policy meeting later today. We could see some dramatic announcements, the primary one being that starting in January, the Fed will double the pace of its monthly taper from USD 15 billion to 30 billion. This means that the Fed’s bond purchase scheme would end in March instead of July, setting the stage for a Fed rate hike soon afterwards. The dot plot at today’s meeting should reflect a hawkish pivot by the Fed. The markets love using the dot plot as a forecast of monetary policy, and expectations are that the Fed plans to raise rates two or three times in 2022, with another three or four hikes in 2023. We could see the FOMC also state that it will no longer refer to inflation as ‘transitory’, echoing what Fed Chair Jerome Powell stated in testimony on the Hill in November.

Australia is expected to post banner employment numbers for November, with a consensus of 205 thousand new jobs, after a reading of -46 thousand beforehand. This surge would reflect the surge in growth due to the lifting of the lockdowns in Sydney and Melbourne. A huge gain in the number of new jobs could provide a boost for the Australian dollar.

A strong employment report would point to a stronger recovery, but it likely won’t change the accommodative monetary stance of the RBA. Governor Philip Lowe has stated that the bank will maintain rates at the ultra-low level of 0.10% until inflation remains “sustainably” within the bank’s target band of 1-3%. At the last RBA policy meeting, the bank said that Omicron was a new source of uncertainty but added that it should not derail the recovery. Still, Lowe may use the Omicron crisis to dampen market expectations of a rate hike, as investors have been more hawkish than Lowe, with several rate hikes priced in for 2022. 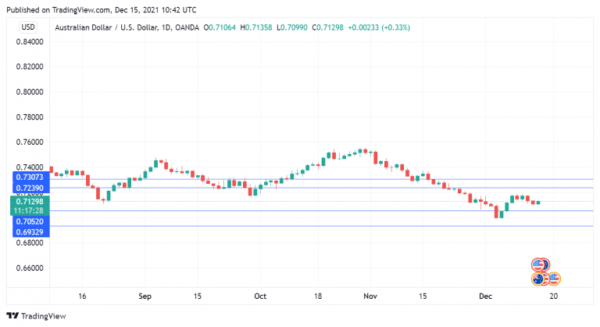