FX Year Ahead 2022: Brace for Volatility

It has been an exceptional year for the US dollar, which defied all the doom and gloom predictions to gain more than 10% against the Japanese yen. The resurgence of inflation has turned the tables with many central banks hitting the brakes, and this theme will likely persist into 2022. The dollar could continue to perform well as the Fed tightens and global growth cools, although inflation is a wild card. Politics will also return to the spotlight, with the French presidential election and the US midterms coming up.

How quickly narratives can turn around. This year started with the assumption that the major central banks were nowhere close to normalization as the global economy was still licking its wounds from the lockdown shock. The overwhelming consensus was that the dollar would continue to crumble under the weight of fading safe haven demand and a patient Fed.

All that fell apart once inflation fired up. The dollar sliced through its competitors as traders priced in several rate increases by the Fed to cool inflationary pressures, pushing US bond yields higher. Looking into 2022, relative monetary policy will likely remain the most dominant theme for FX performance. 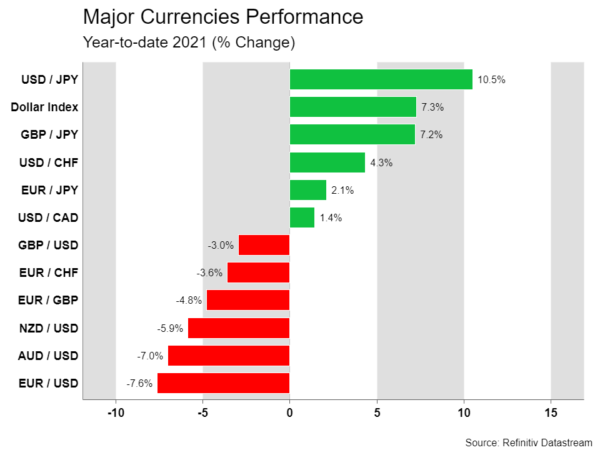 In that sense, the dollar could continue to shine for now. The US economy is booming, with the labor market tight by several measures and inflation roaring, enabling the Fed to raise rates with some force. There’s also the prospect of global growth slowing now that government spending is fading, which typically favors the greenback.

But the dollar’s spectacular performance from 2021 is unlikely to be repeated. Instead, any future gains may be concentrated mostly against the currencies whose central banks won’t be raising rates. Those are mainly the euro, the Japanese yen, and the Swiss franc. With carry trades coming back into fashion, these low-yielding currencies seem the most vulnerable.

That said, there are a couple of ‘known unknowns’ that could clip the dollar’s wings later in the year. The first is a sharp slowdown in inflation that leads markets to dial back bets for powerful Fed tightening. A combination of cooling energy prices, supply chains coming back online, and tougher year-over-year comparisons from April onwards could do the trick. 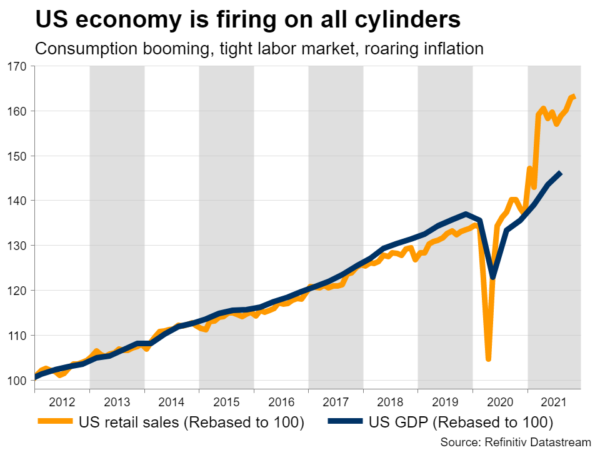 The second is the Democrats losing both chambers of Congress at the midterm elections in November. Opinion polls currently suggest that’s a very strong possibility, setting the stage for two years of political deadlock. Government spending would essentially be limited to only bare necessities, helping to cool US yields and by extension curb the dollar’s rate advantage.

The euro had a horrible year, suffering at the hands of a fragile economy and a central bank that will lag behind in this tightening cycle. Pandemic restrictions have returned in several countries to hamstring economic growth and there isn’t much political appetite left for massive spending packages.

Wage growth also remains muted, so ‘organic’ inflationary pressures are not that strong. As a result, the European Central Bank will almost certainly continue asset purchases through 2022 and is highly unlikely to raise rates during the year, in contrast to market pricing that currently points to a minor rate hike in December. 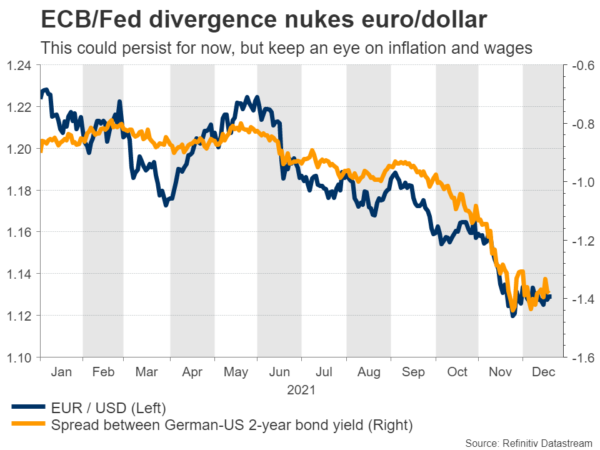 This implies that relative monetary policy could continue to work against the euro, at least early in the year. Beyond that, there’s scope for a rebound. If the European labor market eventually gets rolling, the second half of the year could see speculation for ECB rate increases in 2023. If that also coincides with ‘peak inflation’ in the US, it may be enough for euro/dollar to recover.

Politics will be another crucial element. French voters will go to the ballots in April and while opinion polls currently favor President Macron, the next three most serious challengers are all skeptical of further EU integration. It’s too early to predict the outcome, but some political risk premium could be priced into French bonds and the euro itself heading into the event.

Sterling at the mercy of risk sentiment

The British pound stood firm this year, losing ground against the mighty dollar but outperforming both the euro and yen. Much of that boils down to the Bank of England, which has already started to raise interest rates to tame soaring inflation. The UK economy is quite strong, although the latest covid restrictions suggest growth could cool off in the coming months.

Looking into next year, money markets are pricing around three hikes from the central bank, which seems realistic given the economy’s resilience. Therefore, interest rates may not be the most crucial element for the pound. Instead, the currency’s fate may be linked to global risk sentiment. 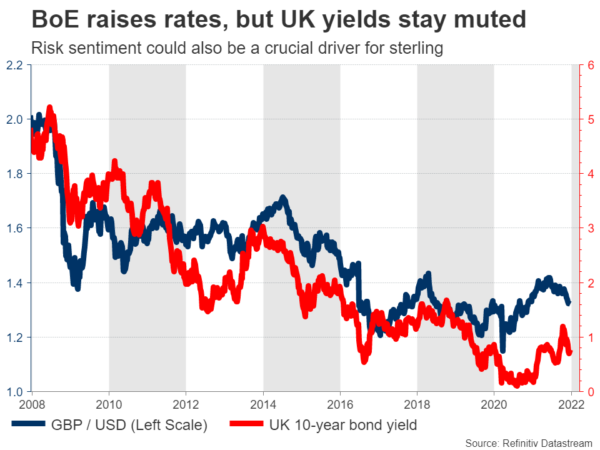 This relationship between sterling and the mood in markets has been on full display throughout the pandemic. It is likely explained by the UK’s twin deficits and its role as a global investment hub. Hence, the path for stock markets could be crucial for the pound.

In this sense, the outlook isn’t especially bright. With both monetary and fiscal policy losing its punch next year while asset valuations are so high, it could be a shaky environment for risk sentiment. The spectacular performances of recent years are unlikely to be repeated, so the pound may be looking at a neutral phase.

Yen – Down but not out

A macro environment characterized by central banks raising interest rates and governments rolling back spending is typically anathema for the yen. This is mainly because the Bank of Japan keeps a ceiling on Japanese bond yields, so rate differentials mechanically widen against the yen when foreign yields move higher.

With the Bank of Japan staying committed to its yield curve control strategy and the nation’s government preparing a powerful spending package, both monetary and fiscal authorities are set to keep their foot on the stimulus gas – in sharp contrast to many other countries. 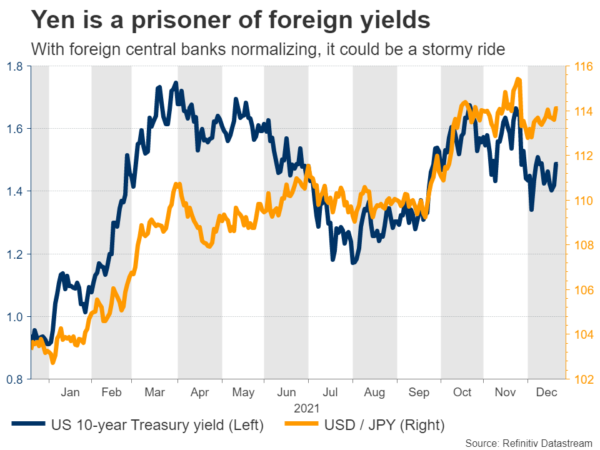 As such, the outlook for the yen seems gloomy against the currencies that will be enjoying higher rates. That said, the yen is unlikely to suffer as much as it did this year, thanks to its safe-haven qualities. With liquidity being withdrawn from the global financial system, volatility episodes that benefit the currency could become more frequent. Hence, while the trend may be negative, it could be a violent ride.

Commodity FX is all about growth

Admittedly, the strongest economies right now are those of New Zealand and Canada. Both have seen their labor markets recover completely and with inflation raging, their central banks have already started to normalize policy. Markets are currently pricing in five rate increases from both the Reserve Bank of New Zealand and the Bank of Canada next year.

In isolation, this would imply that their currencies should shine as carry trades power up. But as we have seen lately, global growth trends and commodity prices are far more important drivers. As such, while relative rate differentials favor the kiwi and the loonie, much of their performance will depend on risk sentiment. 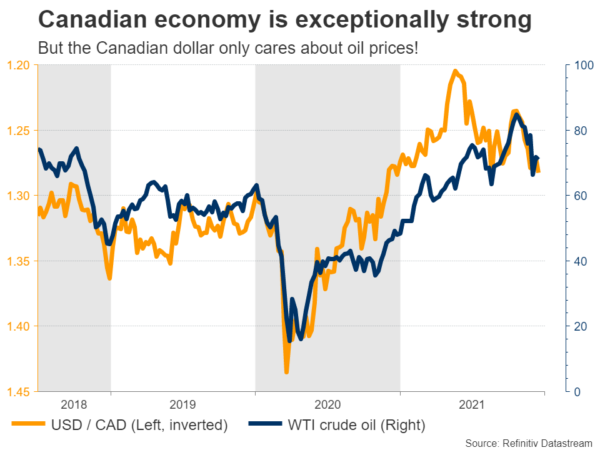 That said, the Australian dollar seems vulnerable. The Australian economy hasn’t recovered so spectacularly, so the three rate increases that markets are currently pricing seem like a bridge too far for the Reserve Bank. This allows scope for disappointment, especially with the Chinese property sector in trouble. A national election scheduled for May could also be crucial for the aussie.

All told, it seems like it might be a year of two halves, with moves in inflation driving shifts in monetary policy and politics adding some spice to the mix. This is a recipe for higher volatility, so get ready for some turbulence.