Canada’s May inflation report will be the main event next week—especially in the wake of a surprisingly large U.S. reading (8.6%) for the same month. We expect Canadian CPI to have jumped yet again, to 7.4% from 6.8% in April, driven mainly by surging prices at the pump and grocery bills. Pressure on energy and food prices in particular will persist as the war in Ukraine continues to raise agricultural and oil prices. But prices are rising across the board. Almost 60% of the CPI basket was growing faster than the top end of the Bank of Canada’s 1% to 3% target range as of April. These factors, together with the U.S. Fed’s large rate hike (75 bp) this week—raise the odds that the Bank of Canada will follow suit with their next policy decision in July.

The pace and magnitude of future central bank rate hikes still depends heavily on inflation going forward. And roughly half of Canada’s current headline rate is driven by global rather than domestic cost pressures. That includes food and energy products that are directly tied to the war but also a portion of other goods purchases (like motor vehicles) that are being affected by global supply chain disruptions. Growth in domestic home buying related expenses has accounted for roughly 20% of headline inflation, and will start to slow in coming months as home resale markets cool . Higher interest rates are lifting mortgage interest costs, but not enough to offset the downward contribution from other shelter components in coming months, we expect. Supply chain constraints that have underpinned goods inflation over the pandemic have also shown early signs of easing, with ocean transport times and shipping costs dropping in recent weeks. Overall, we still expect global central banks to hike interest rates aggressively near-term to take the heat off consumer demand and bring inflation back closer to the target range. 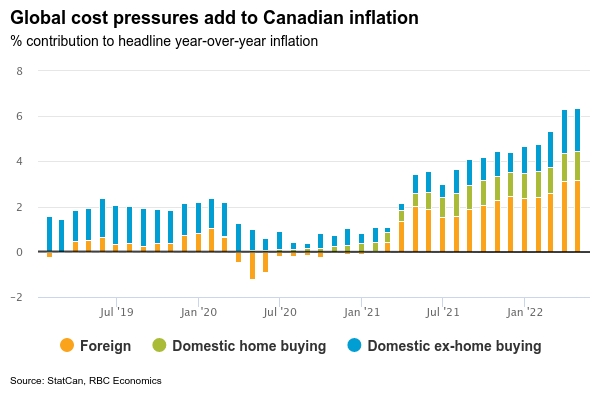 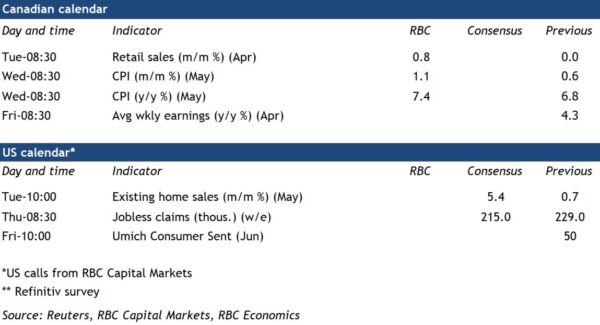