The stock market failed to remain positive for the day, closing Wednesday with a slight decline. Stocks, commodities, and currencies dynamics since the start of the day on Thursday indicate the potential for further downside.

Investors are getting more signs of economic contraction, which increases the chance of a recession in the coming months. Among the commodities, we note a spike in cotton and a fall in copper.

Copper, sensitive to production cycles, has lost 15% in the last two and a half weeks, falling back to its lowest level since February 2021.

Cotton, which has a tight correlation with consumer activity cycles, is trading down about 30% from its peak in early May, 22% of which has been down from early June. The fall accelerated two days ago when the price dipped below its 200-day moving average, underscoring the serious intentions of the sellers. 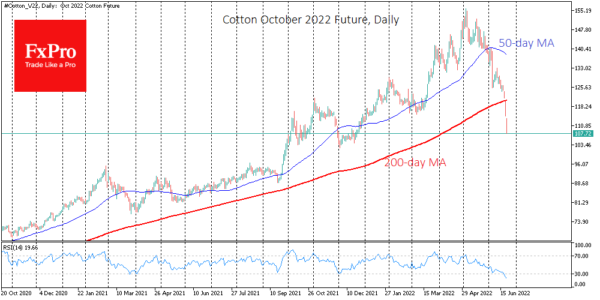 The German DAX40 is again testing the support at 13,000 as the bounce on Friday and Monday proved unsustainable. The FTSE100, meanwhile, is back near the 7000 level, also returning to significant technical and psychological support. 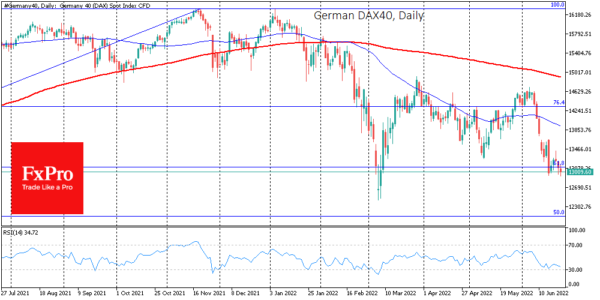 The US index futures also showed a loss of recovery momentum on Thursday.

At the same time, the currency market is showing a pull into defensive instruments. USDJPY pulled back to 135.35 after touching 136.70 earlier in the week. That said, the dollar is doing better than most developed country competitors today.

The euro is trading below $1.05 again after a failed attempt to bounce above $1.06 during Wednesday’s trading. Once again, the bears took the upper hand on EURUSD’s approach to the 50-day moving average. 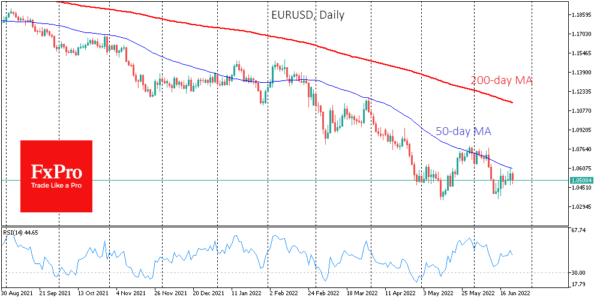 AUDUSD is trading at 0.6880 for the third time in the last two months. A move lower would take the Aussie back to where it last changed hands in July 2020, and it is not helped by expectations that the Reserve Bank of Australia will hike the 50-point rate twice, in July and August.

Recent dynamics in various markets indicate that the reduced demand for risky assets comes from a broad front. Some markets are close to their red lines, which could accelerate the sell-off and return volatility to levels of the previous couple of weeks.