Dollar Index May Have Peaked, But Risks Remain for Europe, Japan

In the financial markets, the demand for risky assets has done its baby steps in recovery. The currency market recently has been moving in small increments, but straightforwardly, selling off the dollar against most developed country rivals.

Interestingly, this retreat is more measured than in the second half of May and is not supported by the dynamics of US bond yields. Yields on 10-years have been rising for the last three trading sessions, reaching 3.2%, failing to return to below 3%. 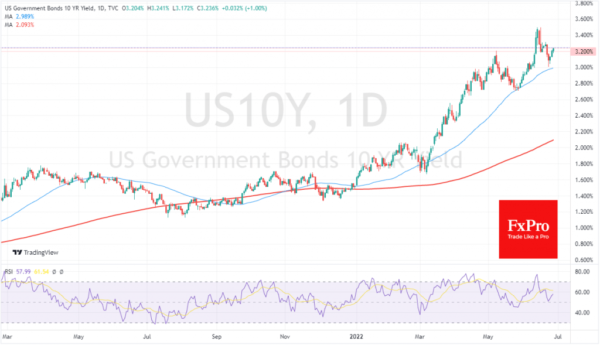 The dollar’s weakening against the background of rising yields reflects two processes. Firstly, there is some increased confidence that the US economy will be able to adjust to higher inflation. Secondly, the loss of upward momentum in the dollar – is the consequence that other central banks have gone out at the same pace of policy tightening, and the markets are starting to put a comparable rate of policy tightening with the Fed into quotations.

This behaviour of the dollar fits into historical patterns, with the average dollar’s momentum that lasts about one year in response to a policy reversal from a pause to a tightening. 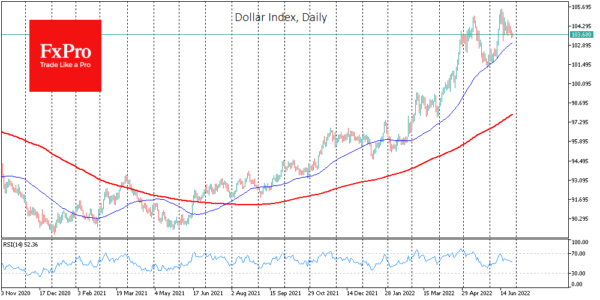 Such an approach suggests that the 17.7%-dollar rally that started in May 2021 is now over. The final chord was the rally in anticipation of a rate hike of 75 points on 15 June, which simultaneously led to a peak in the index.

However, it is also worth remembering the lessons of history not to be too bearish about the USD because the tighter financial conditions in the USA often end with aftershocks in other parts of the world. Such was the series of defaults by Asian countries in 1997 and Russia’s domestic debt default in 1998, triggering a series of local currency devaluations. After the global financial crisis, we saw the default of Greece with intense pressure and a loss of confidence in the euro.

In our view, investors now should again focus on the risks to the eurozone and Japan, not to mention the growing wave of problems in the middle emerging countries suffering from soaring food and energy prices. Investors and traders should pay close attention to these areas, lest they be trapped in overconfidence that the peak of market fear is over.