The Weekly Bottom Line: Technically Not There (Yet)

U.S. – Technically Not There (Yet)

The dreaded “R” word (recession) isn’t one economist’s use lightly. This is why so much focus was placed on this week’s advance estimate of Q2 GDP and the FOMC meeting.

According to Bureau of Economic Analysis, real GDP declined 0.9% q/q (annualized) in Q2 – well below the consensus forecast of a modest 0.4% gain (Chart 1). More significant than the headline print was that activity has now declined in each of the last two consecutive quarters – meeting one (narrow) criteria of a “technical” recession. At this point, most economists would agree that the US economy isn’t (yet) in recession. The National Bureau of Economic Research (NBER), who is tasked with dating business cycles, would also agree. Outside of just economic growth, the NBER considers a host of other indicators including measures of production, employment, and income. At present, most of these measures continue to point to an economy that remains in expansionary territory. 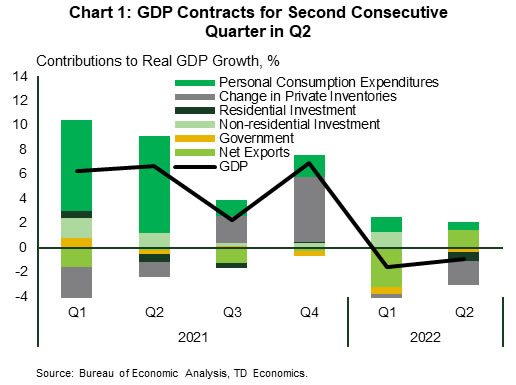 That said, domestic demand has shown a clear sign of slowing. Consumer spending decelerated to just 1% in the second quarter, while fixed investment declined by 3.9%. At this point, it doesn’t appear that growth prospects will be improving anytime soon. Measures of both consumer and business sentiment have turned decisively lower in recent months, and this is showing in the monthly consumer spending data (Chart 2). After adjusting for inflation, real consumer spending was up just 0.1% m/m in June – a rebound from May’s 0.3% decline – but nonetheless a weak handoff into Q3. 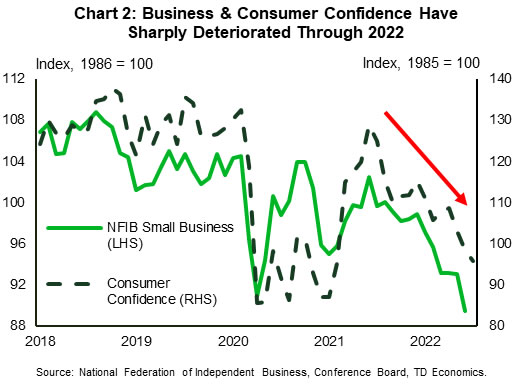 The FOMC acknowledged the recent softening in economic data in the very first sentence of its July statement. But that didn’t stop them from raising rates by another 75bps. At 2.5%, the policy rate is now in the vicinity of the FOMC’s assessment of neutral – the interest rate that’s neither accommodative nor restrictive. However, Chair Powell was explicit in the press conference that the Committee intends to raise the policy rate well into “restrictive” territory in order to return price stability. Powell was careful in his word choice, admitting that doing so will lead to some slowing in growth and a rise in the unemployment rate, but skirted any explicit reference to recession. Just how far above neutral the FOMC will have to go remains dependent on how the economy responds to past hikes between now and September.

Perhaps the most noteworthy takeaway from Powell’s entire press conference came from what he neglected to say. In contrast to more recent briefings, the Chair failed to give explicit forward guidance on the expected changes to the policy rate at its next meeting. Instead, he emphasized the need to “just go to a meeting-by-meeting basis”, suggesting the size of future hikes will be entirely data dependent. From that perspective, the July/August CPI and employment reports will be under the microscope. However, the Q2 release of the employment cost index will also catch the FOMC’s eye. The index adjusts for the composition of jobs, providing the cleanest snapshot of overall employee earnings. It showed that growth in employment compensation remained elevated in Q2 – growing 5.4% (annualized). From a scoring perspective, this favors another big move in September. Let’s see what employment brings next Friday!

Canadian equities rallied in response to the Federal Reserve interest rate hike of 75 basis points (bps) on Wednesday. Though Chair Powell made it clear that the Fed is committed to cooling inflation, he did point to softening consumer spending which could mean fewer interest rate hikes going forward. Canadian 5- and 10-year yields responded to the news and both fell. Copper, aluminum and nickel prices, all key indicators of global demand, also fell this week under concerns of slowing global demand (Chart 1). 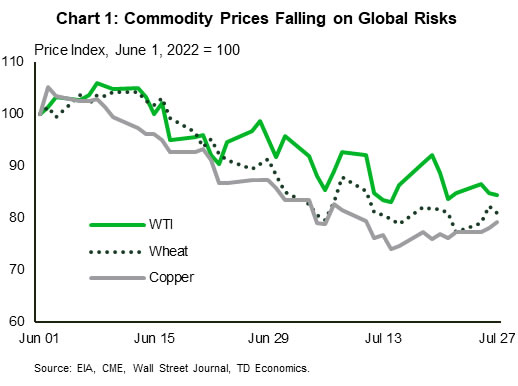 Offsetting some of these price declines was the depreciation of the U.S. dollar, making commodities cheaper for foreign buyers. The slip in the greenback comes after months of investors seeking shelter in the currency as explained in our latest Dollars and Sense report.

Canada’s economy is also showing signs of slowing as GDP remained unchanged in May (Chart 2), and only a modest expansion now anticipated in June (+0.1% month-over-month). As expected, services grew (0.4%) but was offset by a decline in the goods-producing industries (-1.0%). Manufacturing (-1.7%) fell after having expanded for 7 consecutive months, while construction (-1.6%) also contracted. Accommodations and food services picked up some of the slack, expanding by 1.9%. The transportation and warehouse sector (1.9%) also gained ground, with air transportation driving growth. Real estate (-0.2%) contracted slightly as the industry continues to contend with weaker demand given the significant erosion in affordability. 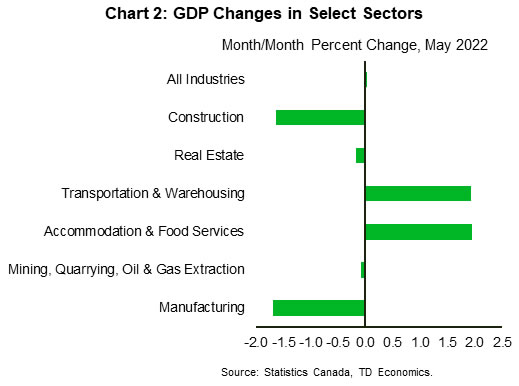 The Canadian small business confidence index also disappointed, as the short-term index showed a monthly drop of almost 8 points in July, falling to 46.7. Similarly, the long-term index also dropped by almost 7 points to 52.7. July’s declines mark the fourth consecutive month that both measures have deteriorated, reflecting low confidence in almost all sectors – particularly retail and agriculture. Across the provinces, Ontario, and Newfoundland saw the largest decline in both short term and long-term optimism, while P.E.I. is somewhat insulated to the low business confidence felt elsewhere. The long-term index showed similar provincial patterns, with all provinces recording declines last month. Of note, the index for Newfoundland fell the most (11.8 points), while Ontario’s index fell 6 points. The weak confidence indicators are another clear sign that the Canadian economy is slowing amid rising interest rates.

Former Governor Poloz said that inflation targeting is “like landing a plane in the fog, you know when you hit the runway you’re there, but right until that moment you’re trying to be data dependent”. The Bank of Canada will no doubt take the softening data into consideration for their next interest rate announcement in September, but the fog is heavy, and we haven’t touched the runway yet.

The European Central Bank (ECB) is facing a daunting outlook. The energy shock due to Russia’s war in Ukraine that is fueling much of the region’s inflation is also increasingly likely to profoundly restrict growth. As near-term indicators are signaling that a recession may soon begin, the ECB has committed to a “meeting-to-meeting” basis for rate decisions that could force them to raise rates into a recession.

Near-term tracking measures have started to show a steep deceleration, or outright contractions, in economic activity in the euro area. July’s flash PMI readings for the euro area reflected a decline in output, with much of the pain being felt in its industrial engine – Germany. The EuroCOIN and Ita-COIN indicators are also showing growth having topped out and starting to fall.

Looking forward, it is the ongoing lift to energy prices that is most concerning. Recession fears have helped crude oil prices off their highs, but supply concerns have supported a high floor under prices. Moreover, if Russia halts natural gas flows to Europe, it risks creating an outright shortage in the coming months, further raising inflation and reducing output. Thus far the energy shock is responsible for roughly half (Chart 1) of the inflationary impulse in the euro zone. 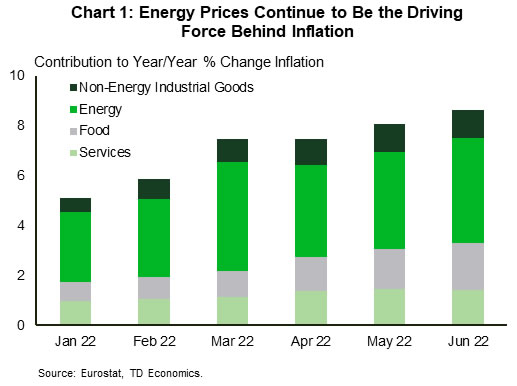 A full stoppage of gas flows would lead to substantial demand destruction and a host of literature on potential losses has emerged in the past months. IMF researchi suggests E.U. output losses could range between -2.7%, in the worst-case scenario and -0.4% if the E.U. were able to fully integrate into the global LNG market.

To counteract the risks, the European Commission has asked for a voluntary 15% reduction in natural gas usage across the EU (with some exceptions). These voluntary cutbacks could go a long way to limit the economic fallout from a gas shortage. IMF estimatesii for Germany suggest that by strategically rationing gas, the direct GDP loss in the first six months of the shock could be reduced from 0.9% to 0.2%. 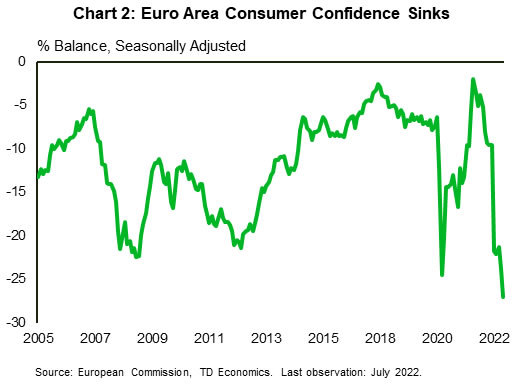 The ECB supported its decision to raise interest rates by 50 basis points by emphasizing the need to temper inflation expectations and the introduction of a new bond-buying tool to help monetary policy transmission. However, higher energy prices are fueling an inflationary feedback loop, and it may soon be faced with the prospect of raising rates to preserve longer-term stability despite an output contraction.