U.S. – Inflation Was the Word of the Week

It was a week full of surprises, with inflation being the key theme. Chief among them was the U.S. Senate quickly moving to pass the Inflation Reduction Act of 2022 (IRA). It now heads to the House of Representatives later today for a final vote, where it’s expected to pass. The reconciliation bill is a significantly scaled back version of the far more ambitious Build Back Better Act, though it still incorporates many of the key climate related initiatives that were included in the previous bill.

In terms of broad strokes, the IRA aims to spend roughly $430B on climate and healthcare initiatives over the next decade and is estimated to more than offset those expenditures with $740B of proposed revenue. Over 85% of the appropriated expenditures will be directed towards climate related initiatives and will be dispersed mainly through grants and loans. Of those investments, perhaps most noteworthy is the $80B in new rebates allocated to eligible households for electric vehicles (EVs) and to help decarbonize residential buildings. The additional funding for EVs not only maintains the existing $7,500 rebate but also introduces a new tax credit of up $4,000 for both used and new EVs, with the latter applying only to those vehicles made in North America.

On the healthcare side, the IRA will put a cap of $2,000 on out-of-pocket prescription drug costs for individuals on Medicare. It also aims to bring down the cost of the most expensive drugs by allowing the government to negotiate the price of a subset of those drugs covered by Medicare, though this won’t start until 2026.

All of this will be paid for through a new 15% minimum corporate tax imposed on corporations earning more than $1B, enhancements to the IRS audit and review process, and taxing share buybacks. The fact that the deficit will be reduced over the next decade is what is being used to justify the “inflation reduction” element of the bill. However, the total deficit reduction is only estimated to be $400B (or 1.6% of GDP), and will be spread over the next decade – suggesting the impact to growth and inflation will likely be negligible. 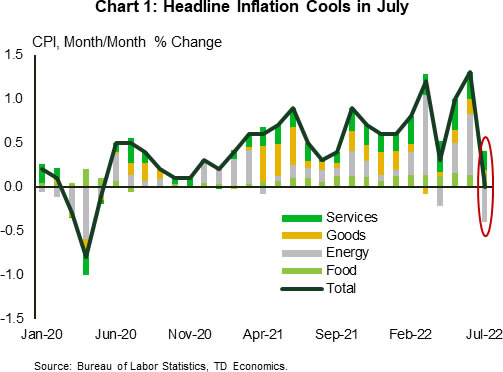 Turing to the other surprise this week, July CPI data (finally!) came in weaker than expected. The headline index was flat on the month, while core prices “only” rose by 0.3% m/m (Chart 1). Indeed, the recent pullback in energy prices subtracted from the headline measure, though accelerating food prices provided a partial offset. Looking to the core measure, there were a few encouraging tidbits. Core services grew by 0.4% m/m – down from the 0.7% m/m reported in June. A lot of the pullback was the result of a softening in travel-related categories, such as airfares, car rentals, and lodging away from home (Chart 2). Other green shoots emerged on the goods side, as prices across most categories decelerated, while used vehicle prices, apparel, and education goods all declined. 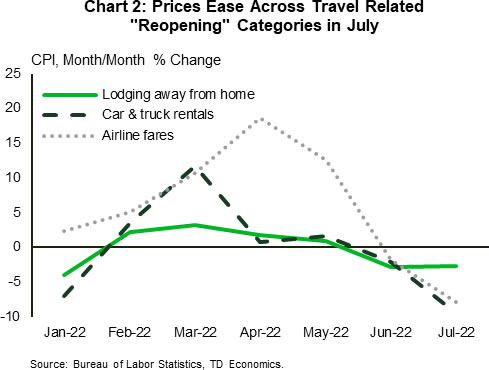 This will be welcome news to FOMC officials, but as San Francisco Fed president Mary Daly said on Wednesday “it’s still too early to declare victory”. Daly reiterated her support to dial back on the pace of rate hikes in September but didn’t rule out another 75bps move should the turn in inflation prove to be fleeting.

With an empty Canadian economic data calendar, all eyes were on what was moving south of the border. Clearly U.S. CPI was the focus with the upcoming Canada CPI release next week. Given that headline month-on-month (m/m) CPI in the U.S. showed zero price growth in July (Chart 1), sentiment jumped on hopes that central banks may not have to hike rates as much as previously thought. This caused short-term bond yields to drop and equity markets to rally over the week. 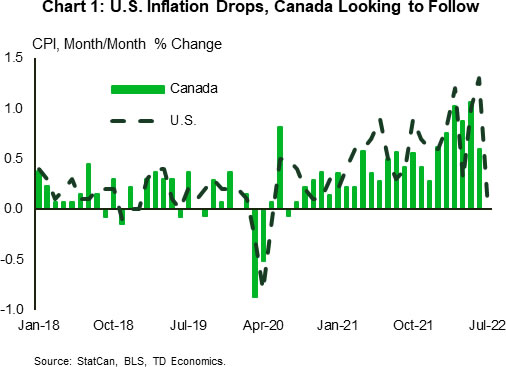 Following the U.S.’s lead, we are looking for Canadian CPI to show a second straight print of decelerating monthly price growth. This monthly trend should translate into a peak in year-on-year (y/y) inflation, with the headline number coming back below 8%. The pullback in gasoline prices will be a primary driver here, with prices having fallen approximately 20% from their peak in early June.

Though a near-term peak in inflation will come as welcomed news, the broadening of inflation to all areas of the economy is likely to keep the annual figures uncomfortably high through the remainder of 2022. We’ll be closely watching the evolution of services inflation, which is most reflective of Canadian domestic demand, and has just started to accelerate on the back of rising wages. It is currently growing at 5.2% y/y and is unlikely to show much deceleration given the still ongoing re-opening boom.

Speaking of interest rates, we will also be getting data on Canadian home sales and prices next week. We are looking for another leg down in sales activity. And with listings holding up reasonably well, this will force the sales-to-listings ratio (currently at 51.7%) even lower. This is putting even more downward pressure on home prices. Based on early readings of transaction data over July, we are expecting the peak-to-trough decline in prices since the first quarter to continue to push towards our forecast of 19%. With the BoC unlikely to pause on rate hikes until later this year, the real estate sector’s fall from grace isn’t done yet (Chart 2). 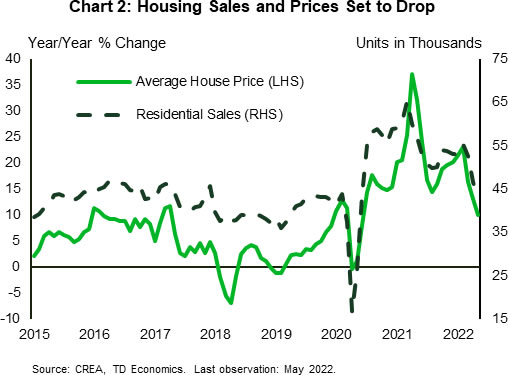