It was a full week for economic data, but the most anticipated event for markets was the Fed Chair’s speech at the annual Jackson Hole conference on Friday. Equity markets didn’t like what they heard. Powell’s hawkish remarks that the Fed remains committed to fight inflation and is likely to keep rates high for an extended period did not sit well with investors, and stocks fell on the remarks. The yield on the 2-Year Treasury was up slightly after the speech, continuing a recent trend as markets expect a bit more monetary tightening over the next two years.

Longer-term bond yields remain lower than the 2-Year as markets expect an economic slowing and future rate cuts by the Fed. It is understandable that investors are worried about a recession, when the second estimate for GDP growth in Q2, was revised up only slightly and still contracted by 0.6% annualized. This release was more highly anticipated than usual because it included another measure of national output – Gross Domestic Income (GDI). GDI measures output based on income in the economy – summing wages, profits, interest payments and investments. Whereas GDP is defined as the value of final goods and services on the production side. In theory they should be similar, but there usually is some deviation due to being measured from different data sources.

Some economists argue that GDI is the better measure – but it is released later by the BEA, and so usually gets less attention. Early estimates of GDI better captured the downturn in the 2007-09 recession. The compromise is that an average between the two measures likely captures momentum in the economy best. In the first half of 2022, GDP estimates suggested the economy contracted, while GDI showed the economy grew at 1.6% on average through Q1-Q2 (Chart 1). The average of the two measures shows the economy stalled in the first half of the year, so to some extent it feels like a potayto-potahto situation – either way you slice it, the U.S. economy is on a dramatically slower growth trajectory in 2022 in the face of high inflation, rising interest rates and less fiscal stimulus. 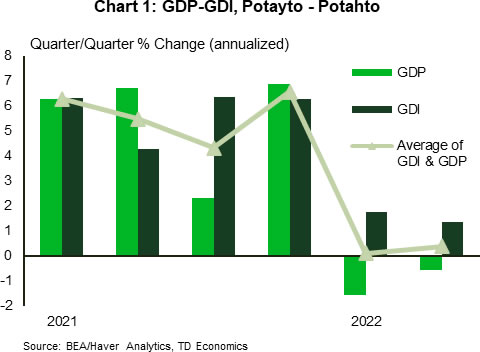 As for momentum in the second half of the year, consumer spending data for July showed that nominal spending continued to lose momentum. But, due to weaker inflation pressures, the real spending slowdown is somewhat less than we expected a few weeks ago. Real consumer spending is tracking around 1.5-2% annualized in the third quarter, which is roughly the same pace averaged over the first half of the year. This suggests the consumer is proving quite resilient to all the onslaughts against their purchasing power.

Inflation, as measured by the core PCE deflator, also cooled a bit in July. Looking at it on a year-on-year basis, core inflation has cooled to 4.6%, and ran at a 4.3% annualized pace over the past three months (Chart 2). We aren’t saying that inflation pressures have been vanquished, but it is encouraging they are moving in the right direction. Given the false dawn we had last year, where inflation pressures originally cooled, only to quickly heat up again, Chair Powell is right to point out that the Fed needs to see more convincing evidence before easing up on rate hikes. 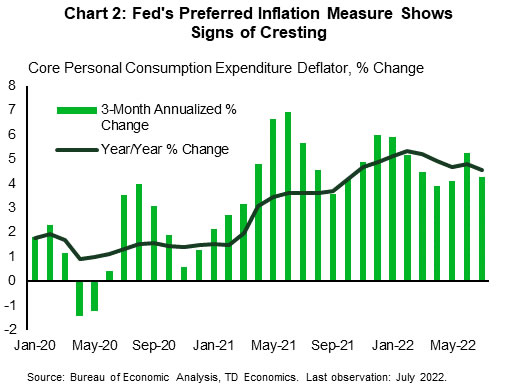 As Canadians were taking their time off to enjoy the tail end of summer, so seeming did the economic data. The economic calendar was sparse this week ahead of next week’s Q2 GDP report. The GDP report will be the final key piece of data for the Bank of Canada ahead of its interest rate decision on September 7th. The release is likely to be a ho-hum affair, given that the report is backward-looking and also expected to come in relatively in line with the BoC’s expectations. In July’s MPR the Bank penciled a 4% (annualized) growth for Q2, and so far, the preliminary monthly GDP releases point to a solid 4.5% expansion.

This year Canada’s economy has been an outperformer relative to the U.S., with its economy contracting in the first half of the year. But Canada’s economic resilience is on borrowed time as rising interest rates, reduced consumers’ purchasing power and negative economic sentiment begin to weigh on growth. Next week’s release is expected to show that underneath the robust Q2 headline print, cracks are already forming in the rate-sensitive sectors of the economy, such as residential investment and spending on durable goods. This sets the stage for significant deceleration in the second half of the year (Chart 1). 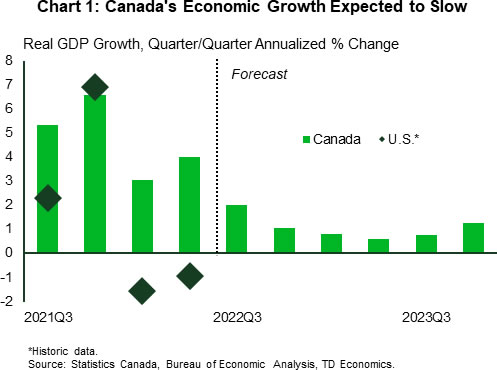 While the housing market has been cooling rapidly over the last several months, consumer spending has so far remained relatively resilient. However, there are signs that spending is slowing. Last week’s retail sales report showed that consumers have been increasingly looking for deals online and have cut back on driving in both in May and June amid surging prices at the pump. The slowing housing market is also weighing on purchases of housing-related items. This week’s data showed that spending on discretionary items, like dining out, which has seen a strong post-reopening rally, may now be slowing as well. Sales at restaurants and bars grew by just 0.8% in nominal terms in June – the smallest increase since January – and were essentially flat after adjusting for inflation.

Though gas prices have been trending lower, which is easing the pressure on headline inflation, core inflation remains too hot for the BoC’s comfort. This is unlikely to ease much in the coming months as the tight labour market is adding pressure on wages. This week’s SEPH/payrolls data showed job openings remained at a record level in June. At over 1 million, this translates into one opening for every unemployed Canadian. The CFIB small business optimism survey also echoed this, with businesses still reporting significant labour shortages (although less than in prior months) (Chart 2). Given this strong starting point, we’d reiterate Governor Macklem’s recent comments where he emphasized that the BoC’s “job is not done yet” as “it will take some time before inflation is back to normal.” 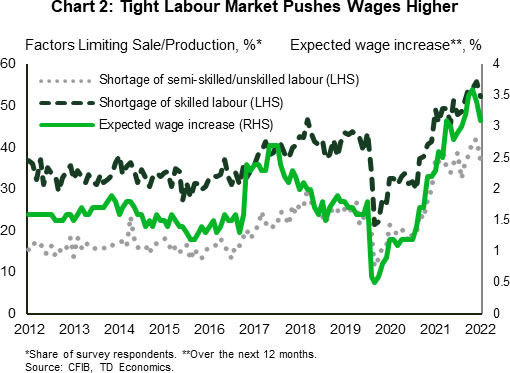 President Biden announced a much-anticipated executive action to reduce the burden of federal student debt. At the time of writing, the White House hasn’t provided cost estimates, or all the details, but according to the Committee for a Responsible Federal Budget, the plan will cost roughly $500 billion dollars over the next 10 years.

The plan also modifies existing income-driven repayments by reducing future monthly payments for lower-and middle-income borrowers. Payments will be reduced from 10% to 5% percent of discretionary income, and forgives loan balances of $12,000 or less after 10 years.

Furthermore, borrowers who are employed by non-profits, the military, or government may be eligible to have all their student loans forgiven through the Public Service Loan Forgiveness program. The pandemic moratorium on federal student loan payments will also be extended through December 31st, saving roughly $20 billion in debt payments.

The announcement puts an end to a debate that has been around since at least the Occupy Wall Street protests a decade ago. The proponents of forgiveness argue it would stop the racial wealth gap from growing and help borrowers turn regular earnings into longer-lasting wealth. Indeed, African American college graduates hold disproportionally large student debt balances in comparison to peers (Chart 1). Those against forgiveness point out that student debt is disproportionately held by more affluent families, and that it will stimulate economic activity at the time when inflation is already running hot. 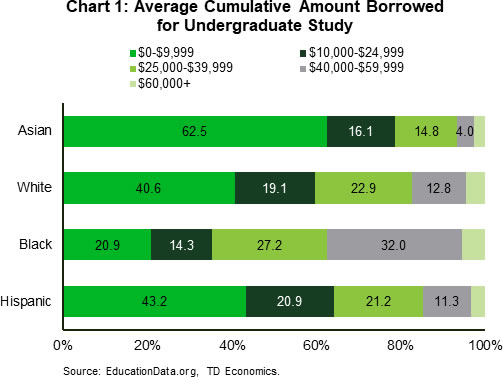 The debate is hot but ultimately the additional forgiveness of $20,000 for Pell grant recipients and modifications to income-driven repayment programs makes the plan more targeted towards lower-income Americans, helping the administration achieve progressive goals. According to White House’s estimates, 87% of the relief will go to lower-income families earning less than $75,000. However, some portion of higher income families stand to benefit, given that the income threshold set at $125,000 is well above the median American income (Chart 2). 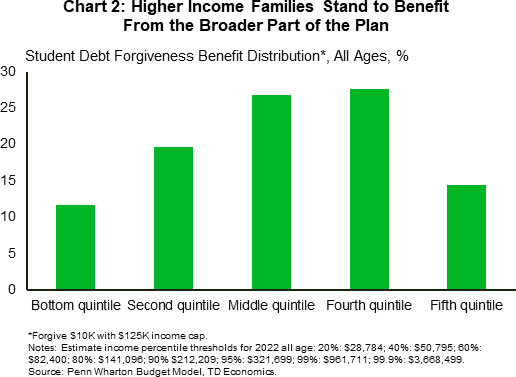 In terms of the economic impact, a reduction in student debt will be mildly stimulative, though the average borrower can expect to have their annual payment reduced by $1,000. While there’s still uncertainty over both the timing and implementation of the program, preliminary estimates suggest that the impact to economic growth will be relatively small compared to its cost – with only a tenth of the dollar amount forgiven expected to flow back into the economy. Still, more economic stimulus at time when inflation is already running at multidecade highs will make the Fed’s job that much harder to regain price stability over the coming years.