New Zealand will report second-quarter GDP data on Wednesday at 22:45 GMT. After a negative start to the year, the commodity-dependent economy has likely enjoyed some post-Covid expansion, avoiding a technical recession despite the dim economic releases during the period. A negative surprise cannot be ruled out, though in any case, the data could do little to alter the RBNZ’s hawkish stance and hence affect the battered kiwi.

The June quarter was not very pleasant for the New Zealand economy according to recent stats. Retail sales slumped more than projected by 2.3% q/q led by declines in furniture, electrical goods, and vehicles. Although retail sales are representing a minor share of GDP, investors consider the measure a solid proxy for economic performance. Therefore, another negative print could be possible, keeping the case for a technical recession open. 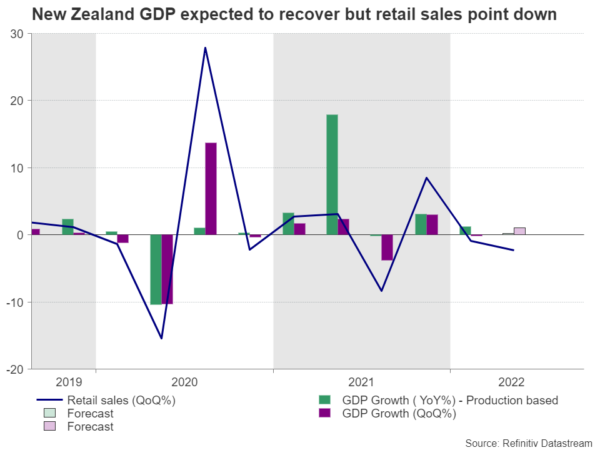 Despite that, analysts are on average optimistic the economy bounced back to the positive area, marking a growth of 1.0% q/q, while on a yearly basis, estimates point to a slowdown to 0.2% from 1.2% previously. Recall that the trade balance was a surplus most of the second quarter despite the depressed business confidence before switching again to deficit in June, while Q2 labor costs almost doubled from the previous quarter as the unemployment rate remained at record lows.

The Reserve Bank of New Zealand is also optimistic that the economy enjoyed some recovery in the June quarter, while eyeing a recession in 2023 in the absence of net exports recovery.

RBNZ may shrug off GDP data

Perhaps the lifting of travel curbs in May brought some economic relief, which may be more evident in the Q3 GDP release. Nevertheless, no matter what the outcome will be, Q2 GDP figures might be outdated when the Reserve Bank of New Zealand meets on October 5 to set its policy.

Besides, with the labor market so tight and high margins in the key dairy industry offsetting farm rising costs so far, policymakers can still afford to prioritize cooling inflation towards their 1-3% target over growth, which is exposed to a slowing housing market and China’s softening outlook.  Recall that consumer prices hit the steepest-than-forecast 7.3% y/y increase in June -the highest since 1980. 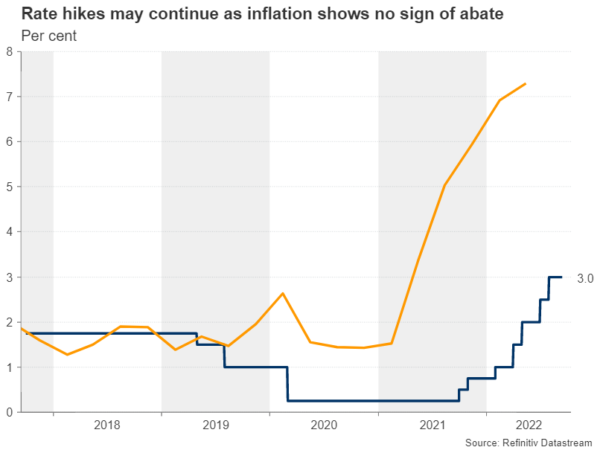 Therefore, unless there is a big deviation from forecasts, the data may have a negligible impact on the RBNZ rate expectations, which are currently pointing to a 50bps rate hike with a probability of 86%. The next inflation and employment reports may have a larger influence on the RBNZ guidance, which showed interest rates rising faster to 4.1% in the second quarter of 2023 versus 3.59% projected in May. It’s also worthy to note that a gradual decline in 2024 is still on the cards.

Given the above, the kiwi has little scope to stage a meaningful rally overnight. From a technical perspective, bearish risks have worsened against the US dollar following the plunge to a 28-month low of 0.5975, opening the door for the 0.5900 round level. In the event of a sharper sell-off, the 0.5840 – 0.5800 constraining zone could be the next destination.

On the upside, only a sustainable rebound above the 20-day simple moving average (SMA) at 0.6120 could ease selling interest and help the pair crawl up to the 50-day SMA at 0.6200. Further up, the restrictive area around 0.6250 could add some downside pressure ahead of the 0.6340 region.