Week Ahead – The Calm Before Another US Inflation Storm

An electrifying week is coming up, featuring another crucial US inflation report and minutes of the latest Fed meeting. Both will be key pieces of the puzzle for the dollar and risk assets, as traders grapple with whether the Fed will pause its tightening cycle anytime soon. Even in case of a softer inflation print though, this type of speculation seems premature.

Investors have been playing with the idea that the Fed might pause its rate increases soon, because of worries the economy is about to roll over. The expected peak in interest rates has been revised down a notch while inflation expectations have declined severely, which allowed stock markets to stage a fierce comeback.

While some leading indicators such as housing and business surveys indeed point to a softer economy, this hasn’t been reflected in the ‘hard’ data yet. The labor market is exceptionally tight with fewer people filing for unemployment benefits in recent months, inflation is still running at four times the Fed’s target, and the Atlanta Fed GDPNow model suggests growth fired up in the third quarter. 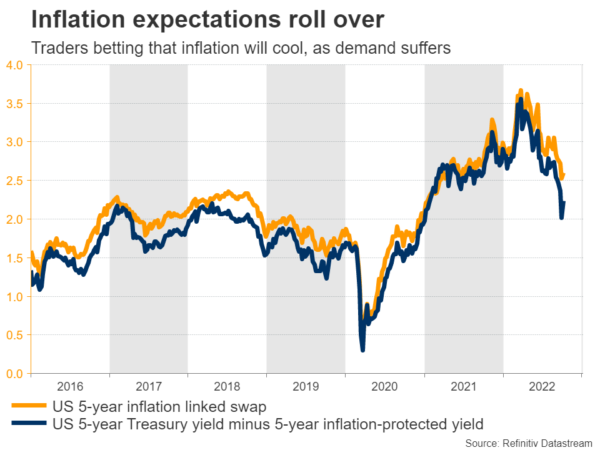 Since the real impact of the rate increases has not shown up, the Fed cannot even think about a pause. Any signal that a pivot is possible would see financial conditions loosen again, with bond yields declining and equity markets rallying. This would counteract the tightening measures that have already been rolled out, making it harder to cool inflation.

Fed officials have spoken at length about avoiding the mistakes of the 1970s, when the central bank eased off the brakes too early and allowed inflation to become entrenched in society. They seem determined to break inflation, even if it means causing a recession. 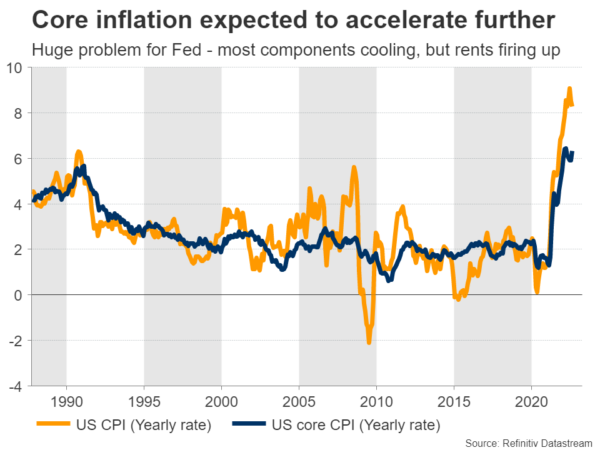 Business surveys from S&P Global suggest that US companies raised their selling prices in September at the slowest pace in almost two years. Gasoline prices also kept falling, alongside used car prices and container shipping fees. The problem is that rents are still booming. Rents account for around one third of the entire CPI basket, and take several quarters to reflect any shifts in home prices.

Minutes of the latest FOMC meeting are out Wednesday, ahead of the inflation report. This is when the Fed raised rates by 75bps for a third consecutive time, projecting it will keep them elevated throughout next year. Then on Friday, retail sales for September and the Michigan consumer sentiment survey will hit the markets. 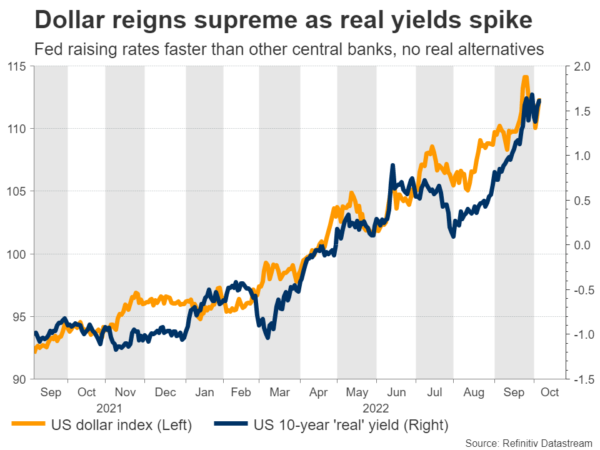 As for the dollar, there’s no sign of a trend reversal yet. Even if inflation cools a little, it would still remain miles above the Fed’s target, keeping policymakers on the warpath. Meanwhile, the prospects for other currencies are even worse. Europe is headed for a deep recession as the energy crisis bites, the British pound has been decimated by irresponsible politics, and the Bank of Japan has left the yen for dead.

Something dramatic needs to change in this power dynamic before ‘king dollar’ loses its crown.

Over in the United Kingdom, the meltdown in the nation’s currency and bond markets was enough for the government to dial back some of its plans to cut taxes for the upper class. Along with the intervention by the Bank of England, this helped restore some calm.

Alas, the outlook for sterling remains negative. The nation’s twin deficits continue to balloon and the BoE is reluctant to raise rates with any real force, concerned that it might deepen the recession it already expects and cause more instability in the financial system. 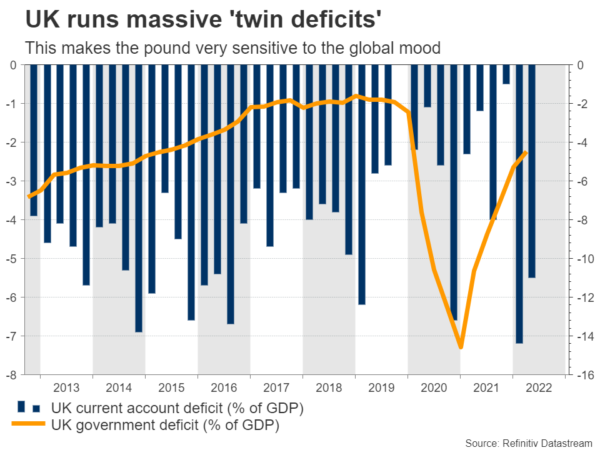 When a nation runs massive deficits, it essentially relies on funding from abroad to finance them. This funding becomes harder to come by when there’s panic globally, so the pound has transformed into a proxy of global risk sentiment. The correlation between Cable and the S&P 500 over the last month is running at almost 90%.

As such, forecasting the pound requires a view of what stock markets will do, and that’s where the negativity really kicks in. Equity valuations are still far too expensive for this level of interest rates, quantitative tightening has doubled in speed lately, and the economic data pulse is weakening rapidly – especially in Europe and China. 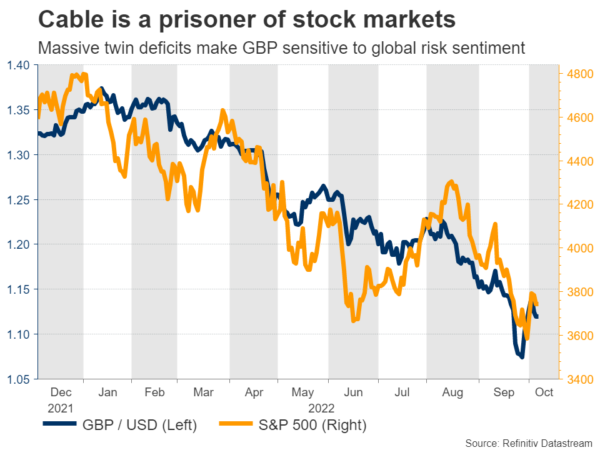 In the coming week, the spotlight will fall on the jobs data for August, out on Tuesday, ahead of the GDP print for the same month on Wednesday. There’s also a flurry of speeches by BoE officials on the schedule throughout the week.

In the world’s second largest economy, the situation seems to be deteriorating as the property market continues to implode while authorities are still enforcing draconian lockdowns that have ravaged growth. The stimulus response from the central bank and government have been underwhelming so far, with the measures that have been rolled out being grossly insufficient.

Over the weekend, the latest Caixin services PMI will give investors a glimpse into the nation’s economic performance as it closed the third quarter, ahead of inflation and trade data on Friday. As always, producer prices might attract special attention, since they are considered a gauge of global factory demand. 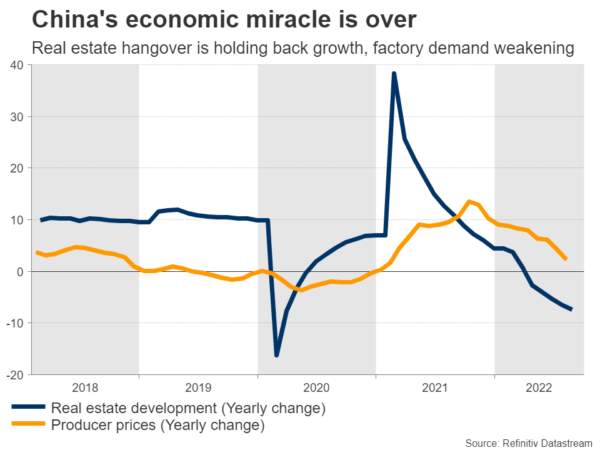 A persistent slowdown in China could keep chipping away at the Australian and New Zealand dollars, which rely on Chinese demand to absorb their commodity exports.