New Zealand’s CPI inflation readings for the third quarter will make headlines on Monday at 21:45 GMT. Estimates suggest that growth in consumer prices slowed down, though unlike its Australian peer, the RBNZ has poured cold water on dialing back plans for aggressive rate hikes. Nevertheless, some volatility in the kiwi cannot be ruled out if any surprises spark another debate about the size of the next rate hike.

NZ inflation to slow but remain in uncomfortable zone

After beating forecasts to rise at the fastest pace of 7.3% y/y in three decades, inflation in New Zealand is expected to have eased significantly to 6.7% in the three months to September. The quarterly change is estimated lower as well at 1.6% q/q from 1.7% and 1.9% previously. 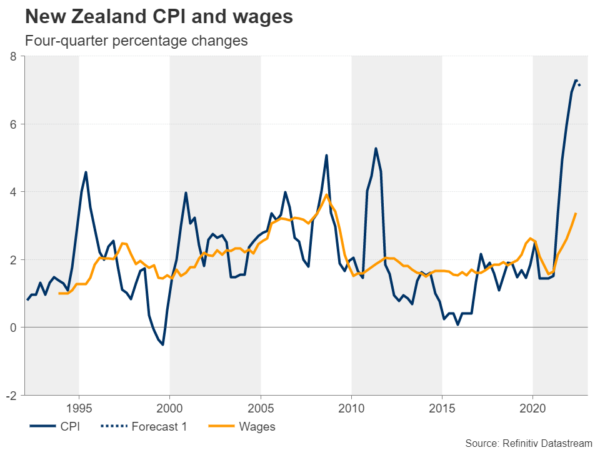 Such an outcome would still be far above the RBNZ’s 1-3% price target after eight straight rate increases, prompting additional tightening actions. Minutes from September’s meeting revealed that policymakers had even been discussing the possibility of a bolder 75bps rate increase before they agreed on a half-point move. That scenario could come back into play if inflation rises above expectations. Besides, the relatively low estimates leave room for an upside surprise.

Consequently, the kiwi may extend its recovery against its Australian cousin, which pivoted southwards after the RBA surprisingly switched to a more moderate 25 bps rate hike earlier this month. Currently, futures markets are certain for a softer 50 bps rate increase to 4.0% in November.

The lifting of travel and other covid restrictions prevented a technical recession in the June quarter and the Deputy Prime Minister brought some relief after saying that the economy can avoid a recession even in the face of a global slowdown. He also projects a return to a current account surplus in 2025.

In reality, however, the economic picture is still sluggish. The trade deficit widened sharply to the largest ever in August despite the depreciation in the kiwi. Also, its biggest trade partner China remains exposed to numerous challenges, from business shutdowns due to zero-covid restrictions, to a housing bubble, and to a fresh escalation of tensions with the US.

Internally, wage growth remains more than halfway below inflation despite its latest pickup, and higher borrowing costs will inevitably bring more mortgage pain as household debt to income is still among the highest in the world. The housing market continued to cool down in September, with turnover below average and prices falling lower according to Westpac’s latest report. Consumer sentiment deteriorated near record lows too. Having said that, signs of weakening demand lowering high prices are perhaps what the central bank wants to achieve after all.

All in all, the RBNZ seems to follow in the Fed’s footsteps, making the RBA’s unexpected pivot look premature for now. Perhaps the data could raise the debate between a 50bps and 75 bps rate hike once again if inflation arrives stronger than investors expected. In this case, aussie/kiwi could slide towards the 1.1100 psychological mark. Even lower, the 1.1025 region, which coincides with the 38.2% Fibonacci retracement of the 1.0276—1.1489 upleg, may next attract attention. The 200-day simple moving average (SMA) may also come in sight in the event of steeper declines.

Should inflation miss forecasts, traders will probably remain confident for a 50 bps rate increase, likely leaving the kiwi stable. From a technical perspective, aussie/kiwi needs a break above the 1.1200—1.1250 nearby restrictive region to reach the 20-day SMA at 1.1324.