Equity markets are in positive territory on the week despite the disappointment in the September inflation data. The Fed is struggling to contain inflation, and September’s reading was hotter than expected once again. The Fed still has its work cut out for it in bringing inflation back down. However, there were a few silver linings in inflation’s gray cloud that give some reasons to believe that the fight against inflation may be turning.

First up, the bad news. Consensus expectations for a +0.2% month-over-month (m/m) reading on headline inflation were shattered by the +0.4% increase, while expectations for core inflation of 0.4% were also handily beat by the 0.6% uptick. Underpinning the rise were strong price growth in core services (+0.8% m/m), and food (+0.8% m/m). The core services print is what’s of interest as these prices are notoriously sticky. Shelter costs (+0.7% m/m), medical care services (+1.0% m/m), and transportation services (+1.9% m/m) were all well above what the Fed would like to see. Of these, the shelter component is, by far, the largest contributor to the basket and will be crucial to tempering inflation. To this end, the rate hikes are working, as evidenced by the plateau in home prices. That said, this will take time to translate into the CPI’s measure of homeowner’s equivalent rent (Chart 1), but things are moving in the right direction. 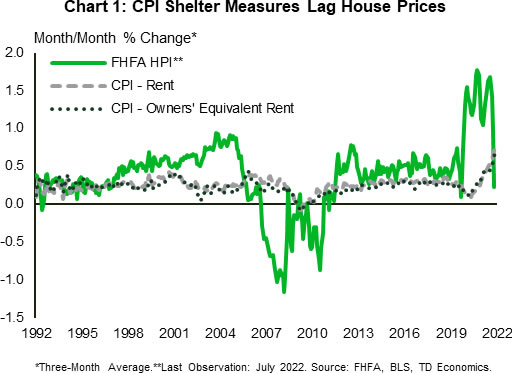 Indeed, core goods price inflation continued to moderate in September (+0.0% m/m), after having risen 0.5% in August. Helping keep a lid on things were a 1.1% m/m pull-back in used vehicles prices and a 0.3% decline in apparel prices. After the run-up over the past year, supply chain improvements are helping ease price pressures (Chart 2). These developments are important as they were always going to be among the first signs that inflation was moderating. Layer in this week’s NFIB report that showed a slightly smaller share of firms anticipating further wage gains and price increases, and the evidence for moderating inflation builds. 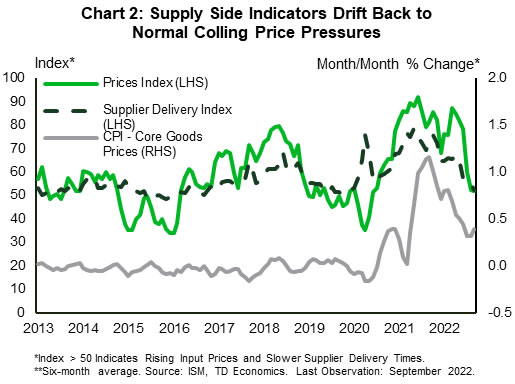 The Fed will welcome the signs of improvement, but if this week’s retail sales report shows anything it’s that even though things may be trending in the right direction there is still ample demand out there. The flat monthly reading registered below expectations for a modest 0.2% m/m gain but was weighed down by falling gasoline prices. The core control group (that goes into the GDP calculation) rose a solid 0.4% m/m, showing consumers are still very active.

Given that things are approaching a turning point, the Fed will be considering any weakness in the data. Indeed, FOMC member Lael Brainard highlighted that “output has decelerated more than anticipated” and emphasized the importance of “moving forward deliberately and in a data-dependent manner” amid “elevated global economic and financial uncertainty”. It would seem she is laying the groundwork for an eventual slowing in the pace of rate hikes. After 300 basis points of tightening this year, a slowing will be warranted soon. Looking forward, higher prices and diminished excess savings will help cool demand for goods and services. Coupled with improving supply-side conditions this will work to temper inflation. With other factors now starting to help the Fed in its mission, we anticipate this rate hiking cycle will top out at 4.5%.

Canada – All Eyes on Inflation and Consumers

The economic data calendar was sparse this week, but the next one will more than make up for it as we get the much-anticipated reading on inflation, Bank of Canada surveys on consumer and business outlooks, and retail sales. On the inflation front, analysts are expecting headline inflation to cool moderately on account of further easing in gasoline prices in September. However, as inflation data from the U.S. showed this week, while headline inflation may be decelerating, core inflation – which strips out food and energy – remains white-hot. Inflationary pressures emanating from goods prices are now ebbing, but services inflation – which tends to lag – is still hot, adding fuel to core. This trend is also underway in Canada, which is expected to keep the Bank of Canada on a hiking path for the rest of this year.

With inflation putting up a fight, the punches keep on coming for the housing market as interest rates march higher. Following a brief pause in August, the house price correction resumed in September with average home prices declining 1.2% on the month, bringing the cumulative drop since February to 17%. Resale activity also continued to cool in a hurry, with home sales down 3.9% m/m. With more rate hikes expected, the housing market will remain under pressure in the coming months, with home sales and prices expected to bottom out in the first quarter of 2023 (Chart 1). At that point, home prices are expected to be 22% lower than they were in the first quarter of this year, roughly at the level seen at the end of 2020. 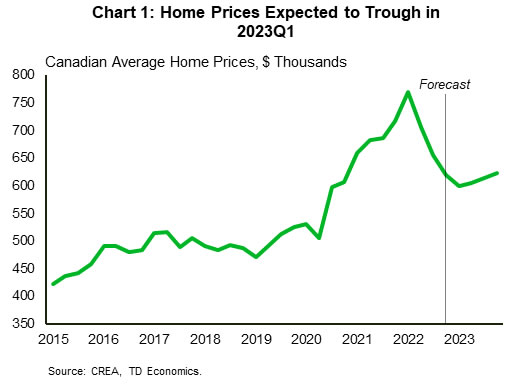 In addition to inflation, we will also receive important signals on consumer sentiment and spending next week. These will shed light on how consumers are dealing with high inflation, falling home prices and rising interest rates. The Bank of Canada Survey of Consumer Expectations will reveal whether or not near-term inflation expectations are starting to come back down, after having increased for several quarters in a row. This would augur well for the Bank, indicating that tight monetary policy is helping to re-anchor households’ inflation expectations. The survey will also provide a year-ahead outlook on consumer spending intentions and expected wage gains – hopefully those will also show signs of easing.

Lastly, next Friday’s retail sales report is expected to show a modest uptick in store sales in August, after a hefty drop in July. This is also consistent with TD’s credit and debit card spending data, which is showing that spending on goods – mainly captured in the retail report – fared better in August and September relative to the prior months, however, the overall spending momentum remained soft (Chart 2). The Equifax Consumer Pulse survey released this week showed that more consumers have been cutting back on discretionary spending as financial headwinds intensified. TD’s spending data is similarly showing a drop in spending on recreation and entertainment in September – the first monthly decline since January when COVID-19 restrictions were in place. 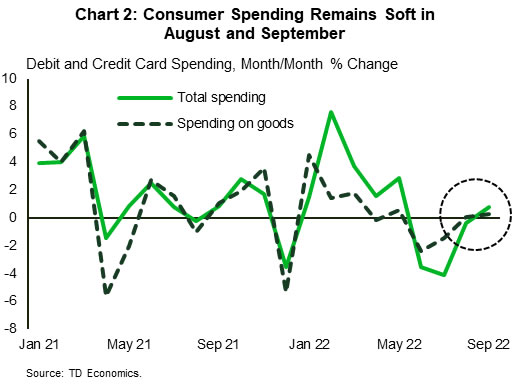