BoE call. We expect the Bank of England (BoE) to hike the Bank Rate by 50bp on 16 December bringing it to 3.50%. Markets are currently pricing slightly above 50bp for the meeting next week (55bp). As a result of a more balanced fiscal policy, market conditions have cooled off and broadly returned to conditions we saw prior to the mini-budget. We thus expect a return to slower hiking pace. 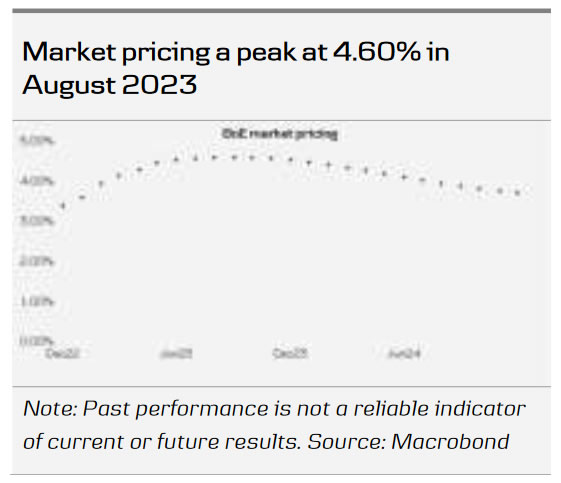 We expect the Bank to return to its more dovish stance as recession risks are becoming more pronounced and the growth outlook is increasingly becoming weaker. This was highlighted by the MPC’s latest projections, which described a very challenging outlook for the UK economy, where it now expects the UK “to be in a recession for a prolonged period.” The BoE’s November Decision Maker Panel also shows that broad inflation expectations dropped with participants expecting CPI inflation to be 7.2% one-year ahead, down from 7.6% in the October survey. Additionally, the BoE tends to ear on the side of caution, why we expect the return to a 50bp hike. 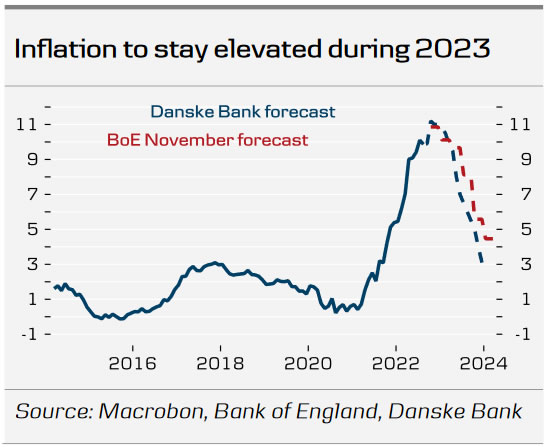 We keep the rest of our forecast unchanged, expecting a final 25bp hike in February 2023, which is fewer hikes than priced in markets (currently 160bp until August 2023). If inflation pressures persist and/or the economy surprises on the upside we see a case for an additional rate hike in March 2023.

We expect no news regarding QT-communication and expect the BoE to continue reducing the government bond holdings by a total of 80bn by November 2023.

Growth outlook. The UK economy held up during the first half of 2022, but the Q3 GDP figure marked in our view an official start of the recession as the economy is likely to weaken further. We expect the economy to contract for four consecutive quarters and growth not to return until the Q4 2023. We now see the economy contracting by 0.7% in 2023 followed by a modest 0.8% growth in 2024. The labour market remains tight with high wage pressure although we are seeing the first signs of easing as unfilled vacancies have returned to pre-pandemic levels. On fiscal policy, the increased focus from the new government led by PM Rishi Sunak on closing the fiscal gap was broadly confirmed by the governments Autumn Statement on 17 November. 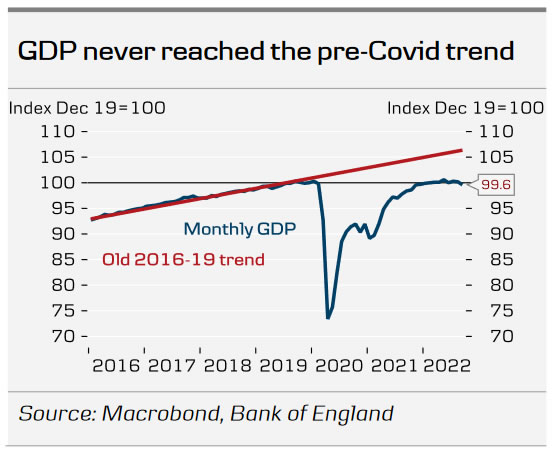 FX. In our base case of a 50bp hike, we expect EUR/GBP to move slightly higher on announcement. In its statement we expect the BoE to highlight the dire state of the UK economy lending support to our call that market pricing is too aggressive currently pricing a peak in the Bank Rate at 4.60% by August 2023. Combined with the expectation of a hawkish 50bp hike by the ECB later in the afternoon, we expect EUR/GBP to move further higher during the afternoon, ending the day ½ figure higher