The Weekly Bottom Line: Results of Inflation Fight Will Show Next Year

U.S. – Results of Inflation Fight Will Show Next Year

2022 is winding down, but as the economic developments of this week show, it is not going quietly into the night. Across the Pacific, in a surprise move, the Bank of Japan (BOJ) adjusted its yield curve control policy by allowing the 10-year government bond yield to rise as high as 0.5% from a previous cap of 0.25%. The change propped up the Yen and sent equities lower, with smaller reverberations following across global markets. While the BOJ didn’t tie the move to inflation, it comes at the time when Japan’s core inflation has hit a 40-year high. In the face of rising price growth though, any signal of a ‘pivot’ from the last major central bank that has been sticking with ultra-loose monetary policy is worth closely watching.

Here at home, total PCE inflation slowed to 5.5% (y/y) in November from 6.1% the month prior. Meanwhile, the Fed’s preferred inflation gauge, core PCE, eased to 4.7% from 5% in the month prior. Of note, the three-month annualized pace of core PCE (3.6%) dropped below the Fed policy rate (4.5%). This restrictive monetary setting will continue to test the resilience of the American consumer. Speaking of the latter, real spending growth slowed in November, holding flat from the month prior. This as decent growth in services (0.3% m/m) roughly evened out with a more pronounced decline in goods spending (-0.6% m/m).

Circling back to inflation, the PCE report’s key message is that while moving in the right direction it is still well above target (Chart 1). With the Fed’s recent signaling in mind, we anticipate it will lift the policy rate by another 50 basis points (bps) in the first quarter of 2023 to 5%, before taking a long pause to assess the impact.

Monetary policy changes tend to work with a lag, but interest-sensitive areas of the economy such as housing, where the impact is more immediate, continue to show considerable bruising. Existing home sales fell a sharp 7.7% in November, extending their losing streak to ten months. Resale activity is now plumbing the depths last seen during the housing crash (Chart 2). In this vein, it is no wonder that builders continue to ease off the accelerator, with housing starts declining for the third consecutive month in November (-0.5% m/m). A sharp pullback in multifamily permits (-16.4% m/m) suggests that the weakness in homebuilding may be spilling over to this (so far) resilient sector. 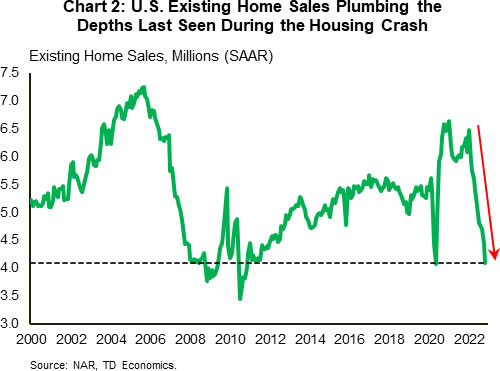 Mortgage rates have fallen roughly 70 bps over the last few weeks, which suggests that some near-term improvement in home sales could be in the cards. Ultimately though, even with the latest easing in mortgage rates to 6.3%, housing affordability remains strained, which means that a sustained turnaround in activity is still some ways away. We believe that the housing weakness will continue over the next several quarters, with home prices (already in retreat) falling roughly 10% peak-to-trough. Among other things, this view is based on expectations for a softening in labor market conditions, with the unemployment rate projected to rise 1.5 percentage points ahead. While we don’t anticipate an outright contraction in economic output next year, with U.S. growth projected to be cut roughly in half to 0.9%, the margin for error is indeed thin. All told, 2023 will bring forth not only the benefits but also the costs of the Fed’s aggressive hiking cycle.

After a such a turbulent year for financial markets (chart on page 1), it is understandable that many investors may be saying bah, humbug! to festive celebrations. Russia’s war in Ukraine and the fastest increase in bond yields in a generation have taken a toll on markets and the economy. The S&P TSX fared better than other global bourses, thanks to its weighting towards energy producers. The last time Canadian equity markets were down to this extent was in 2018 – when the Bank of Canada and the Fed were last in rate hike mode.

No settling down for a long winter’s nap yet either with a trio of key economic data releases over the past week. Overall, the data paint a picture of stubbornly high inflation and consumer purchasing power getting pinched.

The headline for October retail sales seemed impressive on the surface – a 1.4% month-on-month increase. However, that was entirely due to higher prices, with real sales flat. Looking at sales by category, it is clear consumers have started to cut back on some of the areas that have seen the biggest price increases – notably on gasoline (Chart 1). Sales volumes are also weakening for furniture and appliances, in line with the cooling in the housing market. 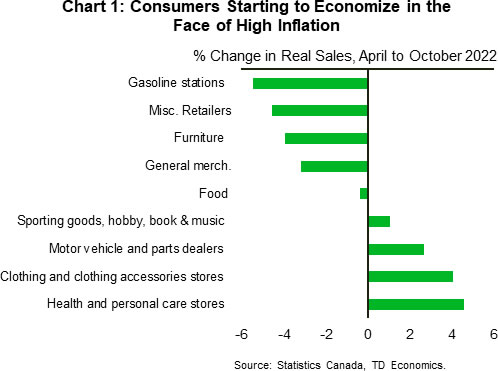 Statistics Canada’s advance estimate for retail sales in November also pointed to a 0.5% m/m decline. The fourth quarter is shaping up to be quite modest for consumer spending, but to remain positive, boosted by stronger sales of motor vehicles, which had been restrained earlier in the year by shortages.

Inflation continues to be the most closely watched economic indicator, and it only tiptoed in the right direction in November thanks to lower gasoline prices. Headline inflation was still very high at 6.8% y/y, and one measure of core inflation – excluding food and energy – is proving quite persistently above the Bank of Canada’s target, at 5.4% y/y in November. As shown in Chart 2, the monthly changes have been running below 5% on an annualized basis over the past four months, but at 4.3% in November is still running well above the 2% pace the Bank of Canada aims for. Still, this is consistent with our recent forecast, which projected inflation to cool gradually. 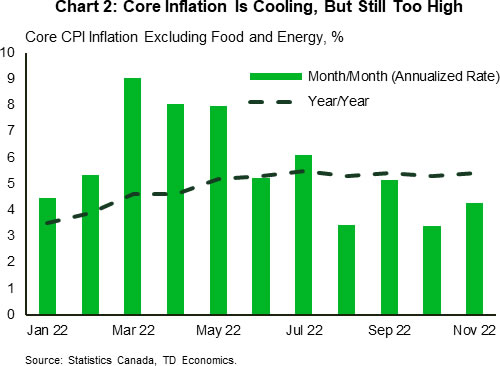 Our forecast also called for fourth quarter growth of just shy of 1%. October’s monthly GDP by industry data, the last release of the week, saw a modest 0.1% m/m increase, and the flash estimate is pointing to another 0.1% m/m improvement in November. This puts Q4 growth at about 1%, very slightly above our forecast.

Looking ahead, 2023 is expected to be a challenging year for the Canadian economy. We expect the Bank of Canada to pause on rate hikes ahead of the Fed (see Dollars & Sense). Canadian household’s high indebtedness means that rate hikes weigh more heavily here, and the impact of higher rates is only beginning to be felt by household borrowers