This week ushered in a new House Speaker and a fresh reading on CPI. The former came after fifteen rounds of votes and several concessions made by Speaker McCarthy. Of those, arguably the biggest was a commitment to pairing an increase in the debt ceiling with cuts in government spending. U.S Treasury Security Janet Yellen informed Congress that the debt limit could be reached as early as next week, and Treasury will start to employ extraordinary measures which are expected to last until June. With Democrats unwilling to tie debt ceiling negotiations to cuts in spending, we are headed for more fiscal brinkmanship over the coming months.

After last week’s payrolls report, investors were eager to see the December reading on U.S. CPI to better gauge the future path of the policy rate. Going into the week, most market participants expected a further downshift in the pace of rate hikes when the FOMC next meets in early-February. Inflation is (finally) moving in the right direction, solidifying market pricing for a 25-bps hike. Equities were up 2% on the week, while the U.S. 10Y fell by roughly 10-bps and currently sits at 3.45%

Headline inflation fell 0.1% m/m – a tick below expectations – with the pullback largely attributed to weaker gasoline prices (-9.4%). The core measure rose by 0.3% which brought the twelve-month change to “just” 5.7% – the slowest pace of growth in over a year. Even more encouraging was the steady downward trend in the three-month annualized change, which now sits at 3.1% (Chart 1). 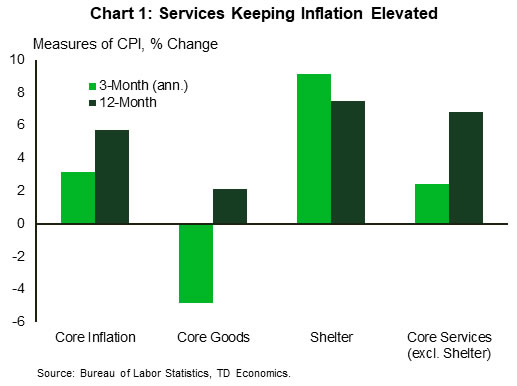 Distortions from the pandemic continued to show further evidence of easing, with core goods prices (-0.3%) falling for the third consecutive month. Declines were primarily concentrated in transportation, while most other categories were higher on the month. That said, retail inventories have been piling up more recently, suggesting we are likely to see further price declines in things like apparel, furniture, and electronics in the months ahead. While encouraging, a softening in goods prices alone can only go so far in bringing down inflation. Core services will also need to slow, and herein lies the problem. Shelter continues to make outsized gains and is not expected to rollover until mid-year. Meanwhile, services (excluding shelter), whose price growth is more closely tied to wages, is unlikely to slow until we see some softening in underlying labor market conditions. And that doesn’t appear to be on the immediate horizon.

Data out this week showed that while the number of small businesses reporting job openings are declining, they remain historically elevated (Chart 2). As a result, nearly half of small businesses surveyed reported having increased compensation in recent months, while more than a quarter are planning to boost wages over the next three months. Elsewhere, jobless claims continued to edge lower through the first week of January – falling to 205k – with the four-week moving average having steadily declined since late-November. Putting all this together suggests the labor market remains incredibly tight and has not yet reached an inflection point. So while inflation may be easing, the Fed is nowhere near declaring victory. We expect more tightening to come over the coming months – likely in the form of two 25-bps hikes – before pausing to assess the cumulative impact of all 475-bps of tightening. 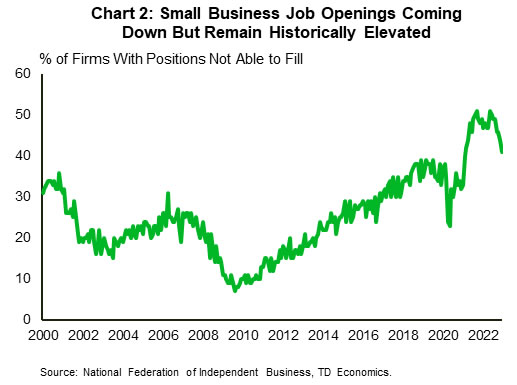 Equity markets started this year on a sturdier footing. Coming on the heels of last week’s gain, equity indexes on both sides of the border continued to rise this week. Investors spirits were lifted by continued improvements on inflation front, with the latest U.S. data showing that price growth continued to decelerate for the sixth consecutive month in December.

This optimism also lifted the TSX, with an additional boost coming from an increase in oil prices. WTI reversed last week’s slump, trading at close to $79/barrel on Friday morning amid expectations that the end of strict Covid-19 rules in China will boost demand for oil in the months ahead. Expectations that inflation have peaked, and that the interest rate increases by the Fed will soon come to an end, also pushed yields on bonds with longer maturities lower. Yields on 5-year Government of Canada bonds followed suit, and were down by about 24 basis points on the week.

Outside of financial markets, it was a quiet week in Canada, however, the next one will be anything but. The highly anticipated Bank of Canada Business Outlook and Consumer Expectations surveys as well as data on existing home sales will kick off the busy week, followed by the inflation report on Tuesday and retail sales on Friday. This will be the final batch of data ahead of the next Bank of Canada interest rate announcement on January 25th.

The two Bank of Canada surveys and the inflation report will be of particular interest, providing guidance on the direction of actual inflation and inflation expectations among businesses and consumers. We expect to see a meaningful deceleration in the pace of inflation in December, thanks to a drop in energy prices as well as smaller gains in food prices (Chart 1) after three months of little progress. While encouraging, headline inflation remains too high for the BoC’s comfort, and improvements in core inflation may be slower, with prices for services likely to prove stickier. 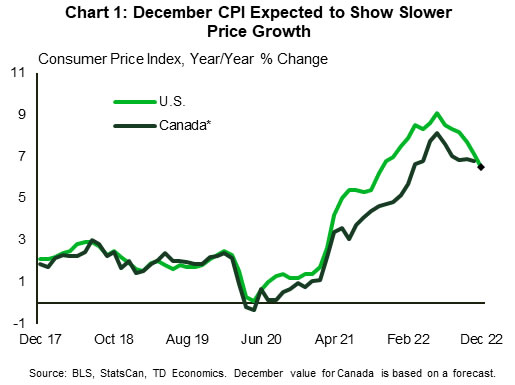 Existing home sales data is unlikely to deliver any surprises. We expect resale activity and prices remained depressed in December, however, based on preliminary regional data, both have likely fared better than expected. Overall, as we note in our latest housing forecast, the bulk of the adjustment in home prices and sales to higher interest rates appears to be in the rear view mirror. We expect that the market will bottom sometime in early 2023, with around a 20% peak-to-trough decline in home prices.

Retail sales will shed light on consumer spending during the busy holiday months. November’s numbers are likely to show a drop in spending, however, the preliminary results for December could show a rebound. This will be consistent with our spending data based on TD debit and credit card transactions (Chart 2). Overall, monthly consumer spending has been more robust in Q4, rebounding from the weak reading in Q3. Taking this together with last week’s strong job numbers, we don’t see much standing in the way of another Bank of Canada rate hike. 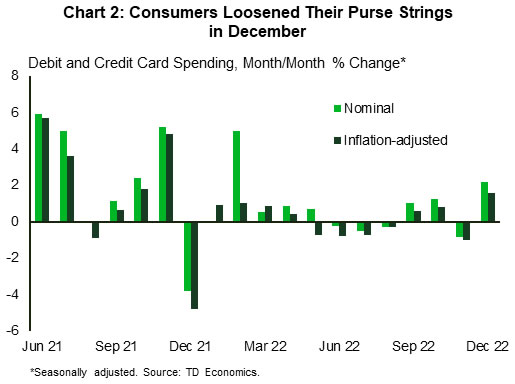