For the past year the euro area has been touted for a severe recession during 2023. Up to now, data have failed to follow suit as they enjoy a period of better-than-expected prints. This situation could reflect the extreme pessimism among professional forecasters going into 2023, but it is evidently unsettling the market and causing a wave of upward revisions in the EURUSD projections. Having said that, next week’s economic releases would be the first real test on the current shape of the euro area economies.

ECB meeting nears, the two sides look for evidence in support of their arguments

With the ECB meeting less than two weeks away, the debate among its members is hotting up ahead of the usual blackout period. President Lagarde at the December ECB meeting essentially announced a series of 50 bps rate moves for the foreseeable future, in exchange for a more aggressive quantitative tightening playbook from March 2023. But recent data, particularly the inflation rates appearing to be in a downward sloping trend, cautiously point to a brighter future than most anticipated a few months ago. This situation has reignited the disagreement between hawks and doves about the ECB’s next moves, thus elevating further the importance of next week’s data.

Could the PMIs climb above 50 again?

Following the impressive rebound in the Economic Sentiment component of the ZEW survey for both Eurozone and Germany, next week we get the preliminary S&P Global Manufacturing and Services PMIs for the eurozone, Germany and France. Set to be released on Tuesday, the Reuters poll is revealing an expected improvement across the board, with the eurozone Services indicator seen climbing above 50. The PMIs have been on a downward trend since the first half of 2021, but they did not reach a level signaling a potentially acute recession ahead. An upside surprise on Tuesday could further support the recent optimism surrounding the euro area economies, especially if the indicators managed to climb above the 50-inflection point. On the other hand, a negative print could imply that the recent optimistic view is potentially unjustified and thus could cause a more substantial market reaction. 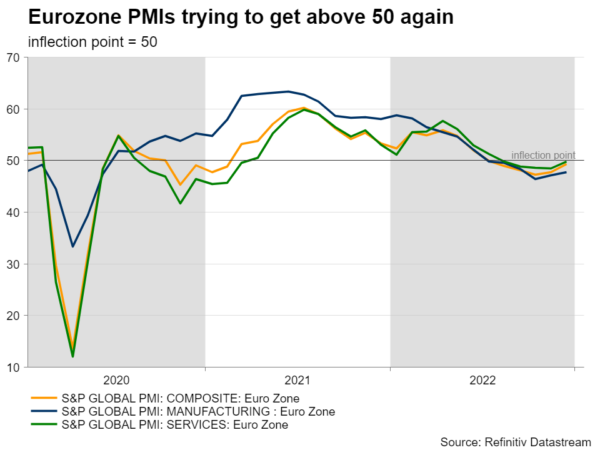 IFO set to continue its recovery

A day later, on Wednesday, we get the January print of the IFO survey, potentially the most closely-watched leading indicator for the German GDP. The dip in the Expectations component during 2022 was shocking on the back of the geopolitical events and the associated inflation surge. On January 30 we will find out the exact damage done with the publication of the preliminary GDP for the fourth quarter of 2022. Looking ahead and based on other German surveys, it looks increasingly likely that the IFO survey recovery could have legs and therefore further support the recent optimism priced in the market. 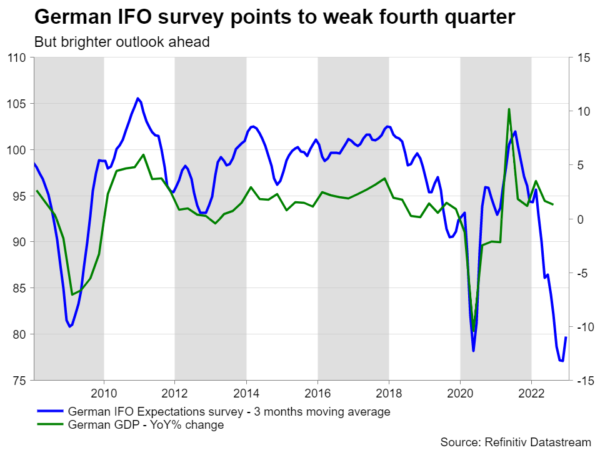 Finally, on Thursday we get two usually overlooked indicators. The French and Italian Consumer Confidence surveys do not possess the market-moving ability of the other indicators. However, they appear to be confirming the current “improved outlook” story for the euro area, albeit from very low levels. The sky-rocketing energy prices have managed to dent consumer appetite to levels unseen since the 2012-13 period. Another improvement at Thursday’s numbers would make the economic outlook less dim from the consumers’ perspective even though inflation remains close to record levels. 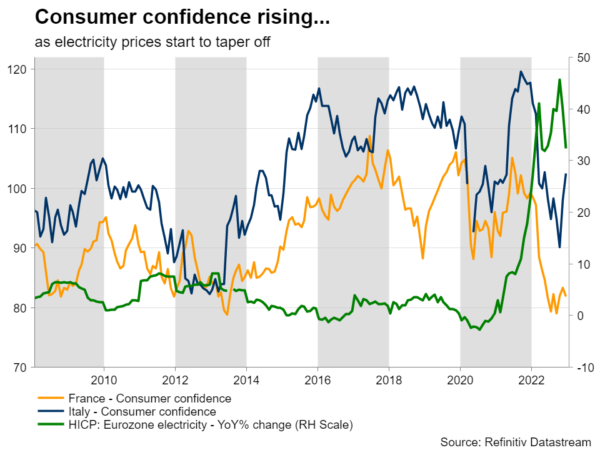 In synchronization with other stock indices, DAX 40 has enjoyed a very strong start in the new year, trading to the highest level since February. It is actually recording the strong start since January 2015 when it closed 9.1% higher on a monthly basis. Having said that, the overall technical picture is less bullish than the recent price move implies. The momentum indicators are revealing signs of exhaustion after the 1,500 points jump from the December 20 low. A close below the 14,813-14,914 range could potentially tip the balance in favour of the bears. 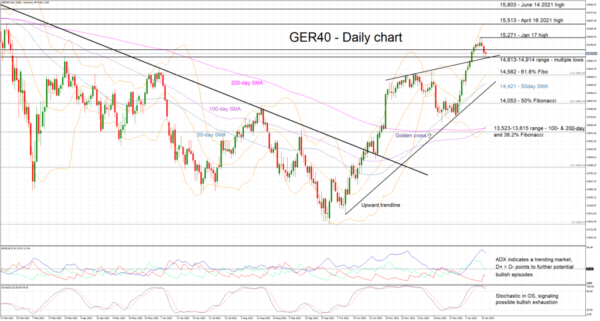