China will see the release of trade data for the month of January on Thursday, with analysts projecting both exports and imports to grow at a solid pace; the release is tentative, lacking a fixed time of release. Figures on January producer and consumer prices out of the world’s second largest economy will also be attracting attention on Friday. Both PPI and CPI are expected to soften on an annual basis.

Before delving into the analysis, it is worthy of mention that the long Lunar New Year celebrations taking place in China have the capacity to distort the various readings, thus one might be justified not to read so much into the trade data before and after the holiday. The Chinese New Year will be celebrated on February 16.

Exports and imports are anticipated to expand by 9.6% and 9.8% year-on-year in January respectively. These compare to a 10.9% export growth rate and a 4.5% import growth rate in December. The trade balance is forecast to narrow, reaching $54.10 billion from $54.69bn in December.

Despite the projected slowdown in export growth, a 9.6% pace of expansion – should it materialize – still translates into a strong reading and lends support to analysts making reference to improving global growth, which translates into rising demand for Chinese products. A factor potentially clouding the outlook for Chinese exports are rising trade disputes leading to the imposition of barriers to trade between the US and China. The Trump administration’s decision to impose tariffs on imported solar panels and washing machines in late January could be the prelude of what is to follow, while a tit-for-tat approach by China could see things escalating out of control. However, an escalating trade row between the world’s two largest economies doesn’t appear likely at the moment.

Turning to imports, those fell short of expectations in December by a relatively large margin, spurring concerns for a slowdown, something which would be troubling given the government’s efforts to rebalance the Chinese economy from the export-driven model of growth of the past to the one where domestically-driven consumption makes up a significant portion of the economic pie. If the actual reading comes as expected, January’s imports would grow at more than double December’s pace. This would be welcome news, though the increase is most likely to be attributed to inventory buildup ahead of New Year festivities, rather than reflect a rise in underlying demand. Moving forward, should the government’s attempts to curb risks in the financial system (in the form of excessive debt) intensify, this could pose downside risks on imports. However, such a move would likely contribute to the long-term sustainability of economic growth and subsequently imports by reducing the risk of a sharp slowdown due to a credit crisis getting out of hand. 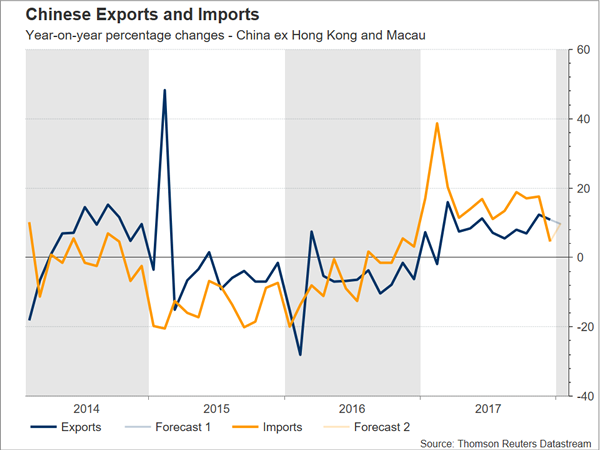 The aussie is viewed as a liquid proxy for China’s economy due to the two nations’ close economic ties – China is Australia’s largest export and import partner – and thus will also be gathering attention as the figures hit the markets.

Upbeat data could incentivize forex market participants to place long aussie/dollar positions. In this scenario, the pair might meet resistance around 0.7893, this being the 38.2% Fibonacci retracement level of the December 8 to January 26 upleg (0.7893 failed to provide support on the way down during Wednesday’s trading and could instead act as a barrier to the upside). This area also includes the 0.79 handle, a level of potential psychological significance. Further above, the focus would shift to the range around the 23.6% Fibonacci mark at 0.7986.

In case of weaker-than-anticipated figures however, aussie/dollar might head lower. Support in this case might come around the 50% Fibonacci mark at 0.7818 (including the 0.78 handle and the current level of the 50-day moving average). Steeper declines would shift the focus to the 61.8% Fibonacci level at 0.7743. Notice that the current level of the 200-day MA roughly coincides with this point. It should be pointed out that there is negative momentum at the moment for AUDUSD, with the pair looking set to finish the day lower on Wednesday after declining in all but one of the preceding seven trading days.

January produce and consumer figures out of China will be made public on Friday at 0130 GMT. CPI growth is projected to moderate to 1.5% y/y (versus 1.8% in December) and PPI growth is forecast to ease to 4.4% y/y (versus 4.9% in December). A slowdown in PPI would constitute the third straight month of declines, with the measure growing at its lowest since late 2016 if the reading is released in line with projections. Should annual CPI come in as expected, then it would stand at its lowest since July. Beyond yuan pairs, aussie pairs would again be eyed ahead of and in the aftermath of Chinese inflation data. 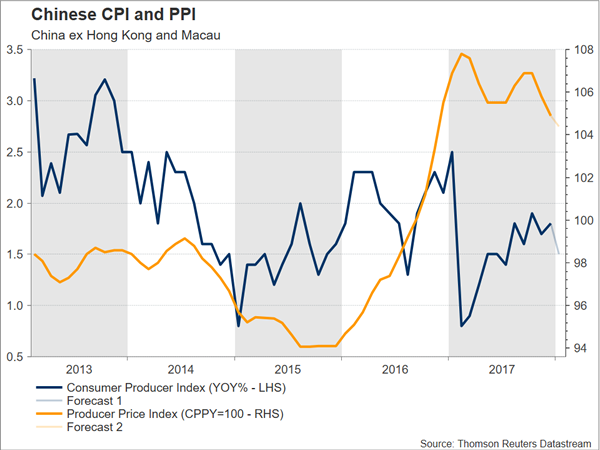 One hour before Chinese PPI and CPI numbers (at 0030 GMT), Australia will see the release of housing finance data for the month of December.