It will be a relatively quiet week in terms of economic data over the next seven days, with the exception of the United States where inflation and retail sales figures will attract plenty of attention. The schedule for central bankers will also be lighter but not totally void as the Swiss National Bank holds a regular policy meeting.

The Bank of Japan kept monetary policy unchanged this week and reaffirmed its commitment to maintain its extensive stimulus program at least until the 2% inflation target has been met. Producer price data out of Japan on Tuesday are expected to show there is little imminent threat of an upsurge in inflationary pressures. Corporate goods prices are forecast to rise by just 0.2% month-on-month in February, with the annual rate declining marginally to 2.6%. Core machinery orders – a key measure of future capital spending – will follow on Wednesday. Orders slumped by 11.9% m/m in December. Another poor month in January could spark some concerns about the Japanese manufacturing outlook over the coming months. However, this is unlikely to have a significant impact on the yen and not much reaction is expected either from the minutes of the BoJ’s January meeting minutes due on Wednesday. 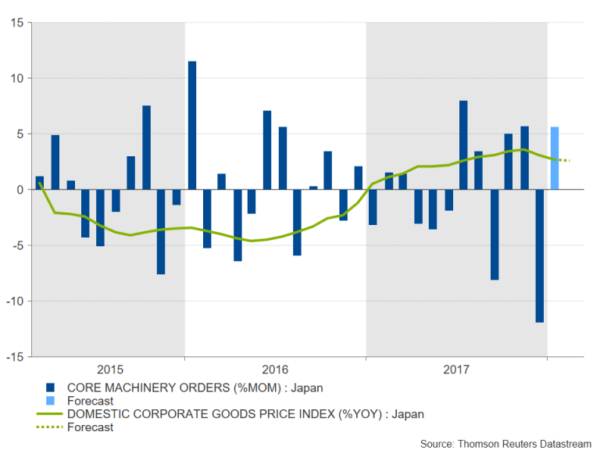 Retail sales in China are expected to have picked up to 9.8% year-on-year in February from 9.4% the prior month, with spending possibly getting a lift from the Lunar New Year celebrations. The boost is not expected to apply to industrial output however, which is forecast to slow from 6.2% to 6.1% y/y. Fixed asset investment is also expected to moderate in February. Stronger-than-anticipated growth in industrial activity should not be discounted though given the surge in exports during the month.

The New Zealand dollar has been consolidating since late January as weak inflation data and market turbulence have put a lid on the kiwi’s 6-week old rally. Fourth quarter GDP figures on Thursday could inject some fresh upside momentum to the kiwi/dollar pair if there’s a positive surprise. New Zealand’s economy is expected to have expanded by 0.5% quarter-on-quarter in the final three months of 2017, slightly below the prior quarter’s 0.6% rate. However, with both employment and trade numbers beating expectations in Q4, a stronger reading is possible. A disappointing figure on the other hand would add to the growing number of analysts expecting the Reserve Bank of New Zealand to stave off from hiking rates until the second quarter of 2019. 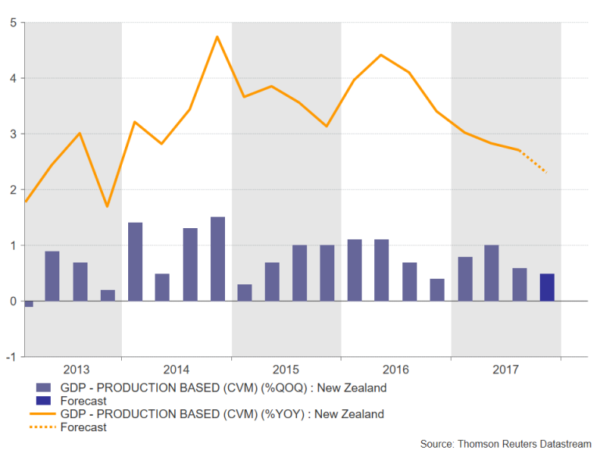 After a dovish Mario Draghi drove the euro to below $1.23 at this week’s European Central Bank meeting, there’s little in the form of data to give the single currency a helping hand up. Industrial production for January (Wednesday) and final CPI figures for February (Friday) will be the only major releases out of the Eurozone next week. Euro area labour costs for the fourth quarter may also attract some attention on Friday.

Investors’ focus will instead turn to the Swiss National Bank and the Norges Bank as the Swiss and Norwegian central banks meet to set interest rates. The SNB is expected to keep its target for the 3-month Libor rate at between -1.25% and -0.25% on Thursday. A stronger-than-expected CPI reading for February out of Switzerland this week is unlikely to prompt the SNB to signal a rate hike. SNB Chairman Thomas Jordan still considers the Swiss franc to be “highly valued” despite the euro’s 10% appreciation versus the Swissie over the past year.

In Norway, policymakers have been having less success with inflation as core inflation in the country has moderated substantially since 2016 to below 2%. However, CPI data released this week showed an unexpectedly stronger-than-expected pick up in February, boosting the Norwegian krone. Rates are forecast to be kept on hold at 0.5% on Thursday, but the Norges Bank could bring forward the timing of a rate hike in its latest projections.

US inflation and retail sales back in limelight

The US dollar managed to regain some footing this week as Korean geopolitical risks and trade war fears abated. Economic indicators out of the US next week have the potential to extend the greenback’s recovery as price and consumer spending gauges come to the forefront. The CPI report is first up on the calendar on Tuesday. The headline inflation rate is forecast to edge up to 2.2% y/y in February, while the core rate is also expected to advance by 0.1 percentage points to 1.9%. On Wednesday producer prices and retail sales figures will keep traders busy. After a 0.3% m/m drop in January, retail sales are anticipated to bounce back by the same amount in February. 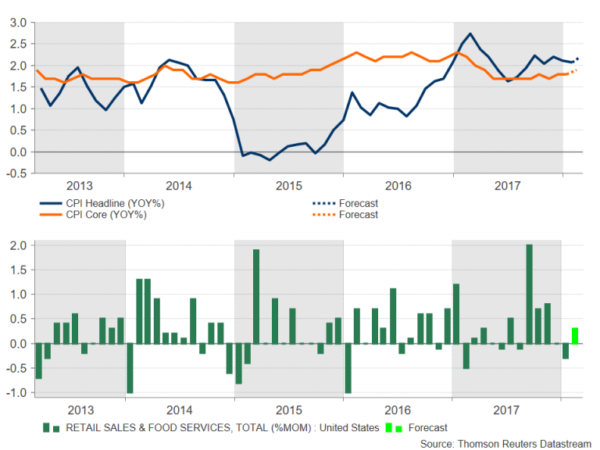 Manufacturing activity surveys for New York and Philadelphia will be watched on Thursday. The New York Fed’s Empire State manufacturing index is forecast to rise in March, but the Philly Fed manufacturing index is expected to fall slightly in the same period. Housing indicators are due on Friday as figures on building permits and housing starts for February are published. Also out on Friday are industrial production data and the University of Michigan’s consumer sentiment gauge. Industrial output is set for a 0.3% m/m rebound in February, following a 0.1% dip in January, while the preliminary reading of the UoM consumer sentiment index is expected to move slightly lower from 99.7 to 99.4 in March.