China will see the release of numbers on February’s fixed asset investment, industrial production and retail sales on Wednesday at 0200 GMT. Barring retail sales, the figures are expected to have eased on an annual basis relative to January’s respective releases. As the readings are made public, attention will be falling on the aussie as well as on any implications for the global economy.

Annually, fixed asset investment, industrial output and retail sales are projected to have grown by 7.0%, 6.1% and 9.8% respectively during February. These compare to January’s corresponding figures of 7.2%, 6.2% and 9.4%. Thus, a minor slowdown is projected in fixed asset investment and industrial production, while retail sales are anticipated to have expanded at a quicker pace relative to the month that preceded. Retail sales, which are a proxy for consumption, are seen continuing to grow faster than either fixed investment or industrial output. 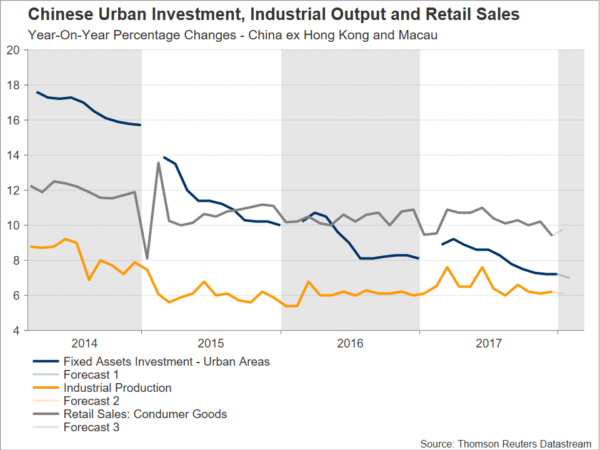 Despite some easing expected in some of the readings, for the most part – should projections materialize – the numbers are pointing to resiliency, especially if viewed in light of ongoing government efforts to curb environmental pollution as well as reduce risks in the financial system by reining in credit growth; both of these are factors weighing on activity, at least in the short-term. Latest news on the clampdown of financial risks indicated that Beijing intends to merge its banking and insurance regulators with the objective to better identify and control risks in the financial sector.

It should also be kept in mind that Lunar New Year celebrations fell in mid-February this year, distorting data releases during the month and rendering judgements on overall trends not that useful. Combined January and February data for fixed asset investment, industrial output and retail sales will also be made public tomorrow, in an attempt to factor out the volatility linked to the period of festivities.

In currency markets, yet again, the aussie which is viewed as a liquid proxy for China’s economy due to the close economic ties between China and Australia – the former is the latter’s largest export and import partner – will be gathering attention as the figures go public.

A data beat might spur long aussie/dollar positions. The pair is potentially meeting a barrier around the current level of the 50-day moving average at 0.7897 at the moment. The area around this level was congested in the past and also encapsulates the 0.79 handle that may be of psychological importance. A break above this area would turn the attention to the range around the six-week high of 0.7988 – including the 0.80 level – that was recorded on February 16.

On the other hand, should the numbers disappoint, aussie/dollar might post losses, with support possibly coming around the 200-day MA at 0.7799. Notice that this includes the 0.78 level that could also hold psychological significance. In case of more bearish movement, the attention would start to increasingly shift towards the two-and-a-half-month low of 0.7710 from March 1. Note that the pair is currently trading around three-week high levels after touching 0.7897 at its peak earlier on Tuesday. The pair was boosted on Tuesday after National Australia Bank’s index of business conditions climbed to its highest on record in February, pointing to broad-based industry strength, but also gained on the greenback’s weakness after Rex Tillerson was sacked from the position of Secretary of State.

On dollar/yuan, it is worth noting that the pair is down by 3.0% year-to-date. On Tuesday, it was supported after the PBOC set a firmer midpoint rate for the pair.

Also China-related, the annual National People’s Congress meetings are currently taking place in Beijing and are set to continue through March 20 with the scope of setting the tone for the year ahead in terms of goals to be met. Last week, Premier Li Keqiang kicked off these parliamentary meetings by announcing that the nation’s growth target for 2018 will be around 6.5%, the same as last year when the economy actually grew by 6.9%.

Lastly, rising trade tensions after the recent decision by the Trump administration to impose tariffs on steel and aluminum, but also the US urging China to reduce its bilateral trade surplus with the country, deserve mention. Any retaliatory actions by China undeniably have the capacity to spur movements in the markets. An outright trade war is more probable following the latest developments, though, at least for the time being, it looks far from the base case scenario. Since reference was made to the aussie, it should be said that an escalation of trade frictions is likely act to its detriment as Australia heavily relies on commodity exports and the currency tends to outperform when global risk appetite is strong.