In his highly anticipated speech overnight, Chinese President Xi Jinping, speaking at the Boao Forum, sent an appeasing note on trade tensions with the U.S, giving markets a lift.

Xi vows to broaden market access, ease restrictions on foreign ownership in the auto sector and protect intellectual property. His comments seem aimed at “negotiation rather than confrontation” with the U.S.

Xi’s cool-headed approach toward the U.S/Sino trade dispute would suggest that the spat would probably end with concessions from China.

Risk assets – including equities and commodities – have rallied.

Stateside, inflation is the markets focus for the coming week, starting today with the producer price report (08:30 am EDT) which may offer the first hard evidence on price effects tied to steel and aluminum tariffs.

Tomorrow, U.S consumer prices (08:30 am EDT) will offer the latest on whether tariff or wage pressures are beginning to be passed through, while on Thursday, import prices (8:30 am EDT) will update the inflationary effects of ‘big’ dollar depreciation.

Also tomorrow will be the FOMC minutes (2:00 pm EDT) and with them details on the inflation debate inside the Fed.

1. Stocks given a leg up

Overnight, Japanese stocks rallied to a one-month high, led by automakers after Chinese President Xi promised to lower import tariffs on products including cars. The Nikkei rose +0.5%, while the broader Topix rallied +0.4%.

Down-under, Australia shares rose on Tuesday as a combination of higher metal prices and comments from China’s president Xi, calmed investors fears over trade tensions with the U.S and China. Both resource stocks and financials found support. The S&P/ASX 200 index gained +0.8%. In S. Korea, the Kospi was little changed at +0.27%.

In Hong Kong, stocks rally the most in a month on China reform pledge. The Hang Seng index rose +1.7%, while the China Enterprises Index gained +2.1%.

In Europe, regional indices trade higher across the board being led by the DAX on gains from Bayer and Auto names. Market sentiment has been helped by comments from President Xi overnight. Investors will now focus on earnings season. 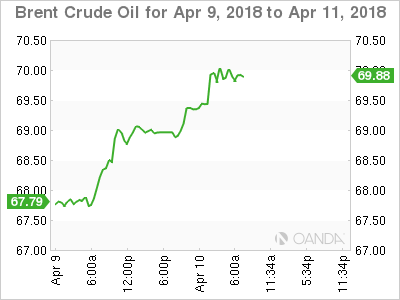 Ahead of the U.S open, oil markets have rallied by more than +1%, extending yesterday’s strong gains, on hopes a trade dispute between the U.S and China may be resolved without too much damage to the global economy.

Note: The gains followed a more than +2% rally on Monday, but that was a rebound from a -2% decline last Friday.

Despite this, prices remain confined within recent ranges as oil markets still face an abundance of supply that puts pressure on producers to keep their prices competitive.

Beyond the U.S/China trade dispute, oil markets are also concerned about the potential of renewed U.S sanctions against some significant oil producers.

Expect investors to take their cues from this week’s U.S inventory reports.

Gold prices have erased their early gains to trade lower on Tuesday after Chinese President Xi promised to lower import tariffs on certain products. Spot gold is down -0.1% at +$1,334.70 an ounce, after having risen to a near one-week intraday high of +$1,338.12 earlier in the session. 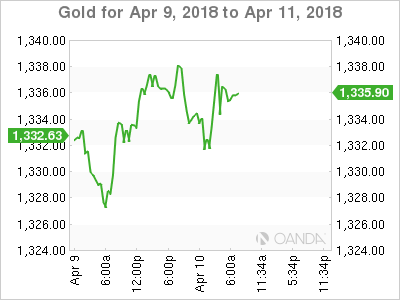 To many, German Bunds are the most expensive and overbought sovereign asset along the fixed income curve.

The 10-year German Bund yield is trading at +0.51%, up +0.4 bps ahead of significant government bond supply from core eurozone countries on Tuesday.

Note: The Netherlands, Austria and Germany line up for bond auctions, while Ireland is likely to go ahead with the syndication of a new 15-year debt on Tuesday.

Net result would suggest that Portugal and the whole eurozone periphery is clearly benefitting from the broadening economic recovery and the ECB’s asset purchases, but the spread also reflects an amount of optimism around the next stage of European integration. 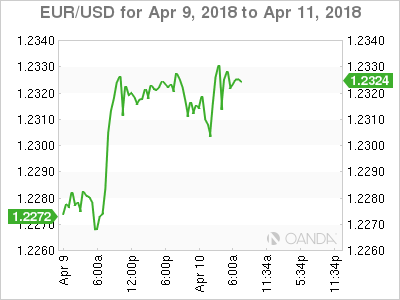 European inflation and growth data both continued to be subdued in the session. CPI data from Netherlands, Hungary and Czech Republic came in below expectations, while French February Industrial Production (IP) missed its consensus view (see below).

NOK (€9.6293 up +0.54%) is a tad softer after Norway’s Mar CPI missed expectations. Norges Bank rhetoric has suggested that their first potential rate hike could come after the summer, but todays disappointing inflation data is pushing the timing further out the curve.

Safe haven flows saw some unwind after China’s President Xi struck a conciliatory tone on trade – both the AUD ($0.7722) and NZD ($0.7340) both rallied in the overnight session.

The Russian rouble (RUB) continues to sell off Tuesday (down -8.1% in two day’s), falling to its lowest level outright in around 16-months as geopolitical pressure on Moscow intensifies. Over the weekend, the U.S. government announced sanctions against Russian government officials and business magnates, and issued harsher criticism against the Russian government for its support of Syrian President Assad. 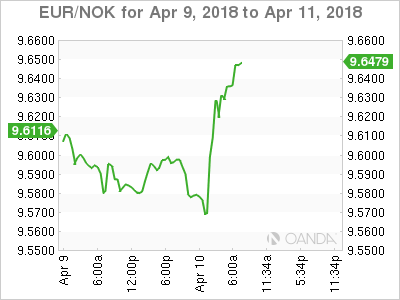 E.U national data this morning suggests that the euro-zone’s industrial sector fared poorly in February, despite a rise in energy production as a result of the unseasonably cold weather.

Digging deeper, the headline production figure for France was fairly positive. French production rose by +1.2%, m/m, and January’s decline was revised to -1.8%, slightly smaller than previously estimated. But, the breakdowns were much less encouraging. The headline increases were largely reliant on substantial pick-ups in energy production due to the exceptionally cold weather, while non-durable consumer goods production fell.

Elsewhere, Italian headline industrial production fell by -0.5% on the month, much weaker than the consensus forecast for a +0.8% rise. Again, energy production picked up sharply, but this was more than offset by weakness in manufacturing. 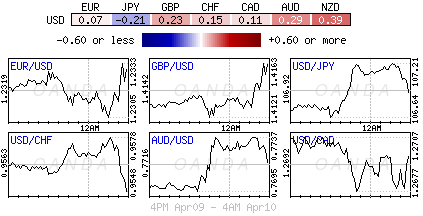