Members of the Federal Open Market Committee (FOMC) have a busy schedule ahead this week as many of them are lined up to make public appearances. Investors will be looking for a hawkish tilt in policymakers’ views after one FOMC member, Eric Rosengren, fuelled speculation of four rate hikes this year in a speech last week. Further talk of a likelihood of more than three rate increases in 2018 could boost the greenback’s recovery from the 16-month low of 104.55 touched at the end of March.

While recent Eurozone data has repeatedly been missing economists’ forecasts, US indicators in contrast have been broadly positive, underscoring the view that US economic fundamentals remain solid even as growth likely slowed somewhat in the first three month of 2018. The Q1 GDP data won’t be out until April 27 but retail sales figures released today showed US consumers have already started loosening their purse strings after a poor start to the year. Retail sales rebounded by 0.6% month-on-month in March following three consecutive months of declines, possibly getting a boost from the Republican tax package. Inflation is also creeping upwards with the consumer price index hitting a one-year high of 2.4% in March.

This leaves wage growth as the only remaining weak link in preventing Fed policymakers from foreseeing a steeper rate path than the one projected at the March FOMC meeting. Wage growth has been confined to between 2.3%-2.8% since 2016, showing little sign of accelerating out of control despite a remarkable pace of job creation since the end of the financial crisis. However, with trade war and geopolitical risks subsiding, and more evidence of the US tax cuts feeding through to the economy, the Fed may start laying the groundwork this week of three more rate hikes in 2018 instead of the two currently priced by the markets.

On Friday, Boston Fed President, Eric Rosengren, said he expected “somewhat more tightening may end up being needed” this year than the median forecast of three rate rises in the March dot plot chart. Although Rosengren is not a voting member in 2018, his views mark a hawkish shift of the traditionally more dovish members of the committee in recent months. Should the hawkish rhetoric be followed by the voting members this week, including San Francisco Fed President and soon to be New York Fed President John Williams, current NY Fed head William Dudley, and Fed Governor Lael Brainard, then the US dollar could receive fresh impetus to push through the 108-yen level. 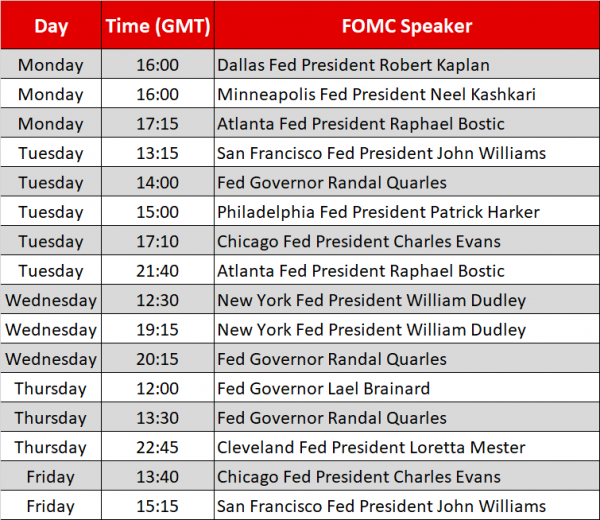 Dollar/yen has turned bullish in the near term, forming higher lows and higher highs in the 4-hour chart and rising above its 50-moving average in the daily chart for the first time since January. However, based on the past year’s performance, growing confidence by Fed officials of meeting their 2% inflation target might not necessarily lead to sustained gains for the US currency.

Bearish bets or net short positions for the dollar rose to the highest in seven years in the week ending April 13, reaching $27.2 billion, according to data from the US Commodity Futures Trading Commission. But with growth in the Eurozone seemingly cooling in the first few months of 2017 and the Bank of Japan still signalling it is in no hurry to follow its peers in exiting from its stimulus program, investors may have become overly bearish about the greenback’s outlook, opening the prospect for a surprise rebound in the dollar.

With dollar/yen starting the week on a firm footing, upbeat language by FOMC members could drive the pair towards the 107.90 resistance area. A break above this level would bring into scope the 108.70 congestion zone. However, should the Fed speakers maintain a cautious tone or, in the absence of a speech by the Fed chief, Jerome Powell, their comments fail to generate significant attention, the greenback could quickly lose upside momentum and head back towards tested support in the 106.50 region. Deeper losses could see the pair retreating nearer the 105.60 support level.