The central bank theme will continue next week as the US Federal Reserve and Reserve Bank of Australia hold policy meetings. The latest nonfarm payrolls report and PCE inflation figures look set to keep the US dollar at the centre of attention for much of the week. Another keenly awaited data will be the flash GDP and CPI numbers out of the Eurozone, while PMI readings from China, the United Kingdom and the United States will also be important.

After tumbling to 4-month lows this week, the Australian dollar will struggle to find much support from the RBA policy meeting and could be headed for further declines. The RBA is almost certain to keep its cash rate unchanged at 1.50% on Tuesday as inflation remains stubbornly low. Data this week showed annual CPI in the March quarter fell short of the bank’s 2-3% target band for the fourth straight quarter, while days earlier, March employment numbers disappointed. The RBA is unlikely to be too concerned by the soft indicators though and will probably maintain its optimism about the outlook. However, any shift to a more cautious tone could send the aussie spiralling downwards. Also to watch out of Australia next week are private sector lending on Monday, and building approvals and trade figures on Thursday (all for March). 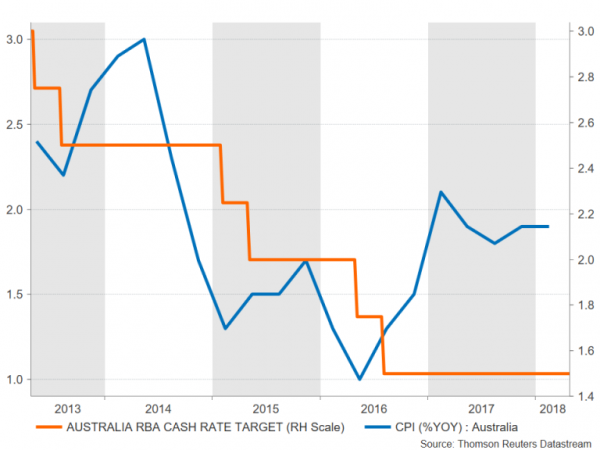 Like its Australian counterpart, the New Zealand dollar has also been underperforming against the US currency. Quarterly job figures out of New Zealand on Wednesday could determine whether there’s an end to the kiwi’s downslide anytime soon.

The Canadian dollar hasn’t been spared from the greenback’s wrath either, though higher oil prices have limited its losses. Data out of Canada next week may provide the loonie with some upside momentum. Monthly GDP numbers on Tuesday are forecast to show the economy expanding by 0.1% in February from the previous month, after a 0.1% drop in January. Other data will include March producer prices on Monday, trade data on Thursday and the Ivey PMI for April on Friday. If the data is broadly positive, expectations of a rate hike by the Bank of Canada this summer may get a boost.

UK and Chinese PMIs in focus

As flash PMIs are not published for the UK and China, the first and only release for April will be looked at closely next week. China’s National Bureau of Statistics will publish the manufacturing and non-manufacturing PMIs on Monday. The Caixin/Markit manufacturing will follow on Wednesday, with the services PMI coming up on Friday. Both manufacturing gauges are forecast to show a moderation in activity in April, likely raising some concerns about China’s growth outlook amid trade tensions with the US.

In the UK, the manufacturing, construction and services PMIs are due on Tuesday, Wednesday and Thursday respectively. The manufacturing PMI is expected to move marginally lower in April to 55.0 but a descent rebound from 51.7 to 52.9 is forecast for the services PMI. After the recent run of weak data, including this week’s poor GDP reading for the first quarter, which sent the pound tumbling to 7-week lows below $1.38, upbeat data with the PMIs next week could provide sterling a much-needed lift. 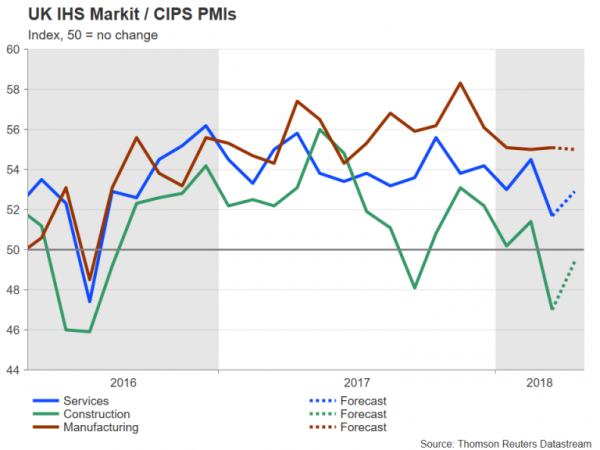 Eurozone flash GDP and inflation under the spotlight

It will be an important week for Eurozone economic data over the coming seven days as flash readings for both first quarter GDP and April inflation are released on Wednesday and Thursday respectively. The preliminary flash print of GDP is expected to show the euro area lost some steam in the three months to March, with growth easing from 0.6% to 0.5% quarter-on-quarter. A negative surprise could trigger further sharp losses for the euro, putting it at risk of losing its grip on the $1.20 handle. The inflation data could provide some support however, as flash CPI is forecast to edge up from 1.3% to 1.4% year-on-year in April. Producer prices are also due on Thursday, while on Friday, the final Eurozone PMIs for April are published along with March retail sales. 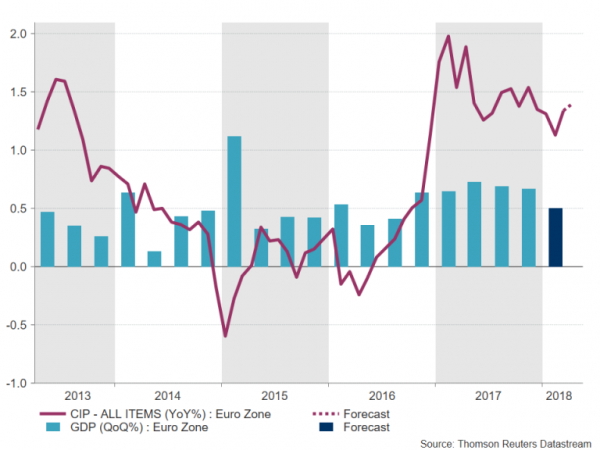 Also on the horizon in Europe is a monetary policy meeting by Norway’s central bank on Thursday. After its Swedish counterpart this week pushed the timing of a rate hike later towards the end of the year, the Norges Bank is unlikely to follow suit and is expected to reaffirm its guidance of raising rates in the third quarter. The Norwegian krone could gain versus the dollar and the euro if the Norges Bank maintains confidence in its outlook.

Fed to hold rates; slew of US data coming up

The Fed will hold a two-day monetary policy meeting on Tuesday and Wednesday, but with rates expected to be kept on hold at 1.50-1.75% and with no press conference, the event will struggle to compete with key US indicators due next week. Starting with the personal consumption expenditures (PCE) report on Monday, personal income and consumption are forecast to increase by a solid 0.4% month-on-month in March. The core PCE price index meanwhile, is expected to pick up from 1.6% to 1.8% y/y in March, taking the Fed’s favourite inflation measure closer to their 2% target. Also due on Monday are pending home sales and the Chicago PMI. On Tuesday, the ISM manufacturing PMI will be watched, with the non-manufacturing composite following on Thursday. Both indices are forecast to fall slightly in April but remain well above the 50 threshold, inside expansion territory.

Finally, on Friday, the all-important nonfarm payrolls report for April will round up the US calendar. Jobs growth is anticipated to have accelerated in April, with 198k jobs expected to have been created. The unemployment rate is forecast to fall to 4.0 from 4.1% in March. However, average hourly earnings are not expected to show any acceleration in wage growth in April, despite the ever-tightening labour market, with the annual rate remaining unchanged at 2.7%. 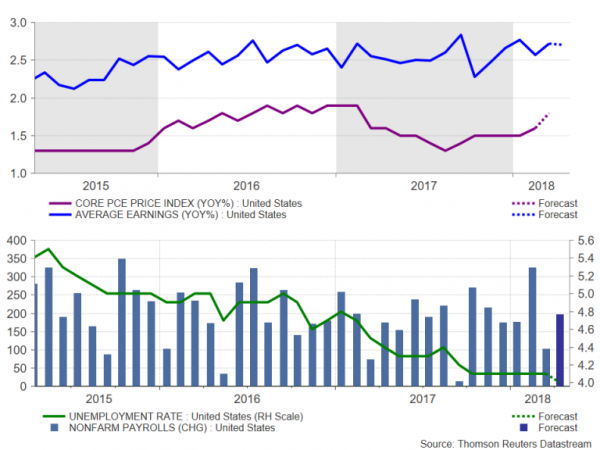 If the data come in broadly in line with estimates, the dollar may find it difficult to advance further following the recent impressive gains. However, positive surprises to either or both the PCE inflation data and NFP report could act as a catalyst for an extension of the current rally. The Fed though will probably stick to the message of gradual rate hikes even as economic indicators strengthen, at least for now.