The Reserve Bank of New Zealand (RBNZ) will announce its rate decision on Wednesday at 2100 GMT. Policymakers are widely expected to remain on hold, so price action will be driven by any changes in the accompanying statement, as well as the updated economic forecasts. While the broader policy message is likely to remain neutral, the Bank could revise slightly higher its inflation forecasts, which may help the battered kiwi get some reprieve.

The RBNZ’s upcoming meeting will be closely watched, as it will be the first one under both a new Governor and an expanded mandate, which now includes promoting full employment in addition to price stability. Even though the new RBNZ chief, Adrian Orr, is anticipated to maintain a “steady course” with regards to policy, the statement and subsequent press conference will still be scrutinized for any minor changes that might provide insight into Orr’s future decisions.

Since the Bank last met in March, developments have been mixed overall. On the inflation front, although the CPI rate dipped to 1.1% year-over-year in Q1, this is unlikely to have surprised RBNZ policymakers, who already expected inflation to tumble to 1.1% in their latest set of forecasts in February. What probably came as a surprise though, is the sharp decline in the kiwi’s exchange rate and the surge in commodity prices since the February forecasts, both of which argue for an upward revision in the new inflation forecasts. 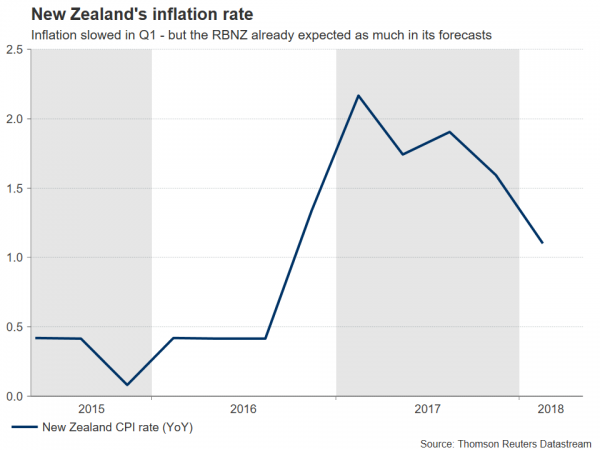 As for the labor market, it posted another quarter of strong employment growth in Q1. However, wage growth remained stuck at 1.9% in yearly terms, likely disappointing those that expected a tight labor market to start producing higher wages, and consequently higher inflation down the road. Still, it’s not all bad news for the Bank, as the minimum wage was raised on April 1 and is anticipated to be raised many more times over the coming years.

What may be worrisome is the tightening in financial conditions that has occurred lately. Even though the RBNZ is maintaining its own rates unchanged, rising interest rates abroad are spilling over into slightly higher rates for New Zealand’s commercial banks. This was already flagged as a key risk by the Bank in February, as it may begin to manifest itself into higher mortgage rates for households, and thereby dampen consumption and economic growth.

Putting all the above together, policymakers are highly likely to maintain a broadly neutral tone, signaling that any rate increase is still far away. Price action in kiwi/dollar will probably depend on whether the Bank places more emphasis on the positive developments surrounding the inflation outlook, or the risk of rising mortgage rates. Although there is a lot of uncertainty involved, a reasonable scenario is one where the Bank raises its short-term inflation forecasts and signals that, it is monitoring mortgage rates closely and will act accordingly, but only if needed. To the extent that this amplifies speculation for slightly earlier rate hikes, kiwi/dollar could rebound, though any such reaction is unlikely to be massive.

Technically, advances in kiwi/dollar may encounter resistance near the 0.7052 level, which is the high of May 4. Further up, sell orders may be found initially at 0.7095, the top of April 27, and subsequently near 0.7150, the bottom of March 21.

On the downside, immediate support to declines may come around the 0.6950 handle, marked by the low of May 8. A downside break of that area could open the way for the 0.6915 barrier, which is the December 6 top, and afterwards for 0.6850, identified by the inside swing low on November 27.