FOREX: Safe-haven currencies did not gain much after Trump announced the withdrawal of the US from the 2015 Iran nuclear deal and expressed his plans to impose stricter sanctions on the country. Although investors were worried that political tensions between Europe, the US, and the Middle East could escalate, they did not increase their stakes on safe-haven investments much. Instead, they remained optimistic on the dollar as they are widely expecting the Fed to proceed with further monetary tightening later this year. In notable movements, dollar/yen touched a one-week high of 109.80 (+0.55%), dollar/swissie hit a one-year high of 1.01 (+0.07%), while the dollar index reached a fresh 4 ½-month high of 93.41. The euro and the pound were on the back foot for another day in the face of a strengthening dollar, with euro/dollar and pound/dollar edging down to 1.1855 (-0.08%) and 1.3537 (-0.04%) respectively. Pound traders were also eagerly waiting for the BoE to cancel what was previously thought as a planned rate hike on Thursday. Dollar/loonie inched down to 1.2937 (-0.08%), as rising oil prices continued to underpin the commodity-linked loonie. Aussie/dollar remained near 11-month lows, last seen at 0.7439 (-0.15%) and kiwi/dollar continued to fluctuate around 0.6960, at near four-month troughs ahead of the RBNZ rate decision later today.

STOCKS: A boost in oil prices following Trump’s decision to leave the Iranian nuclear deal helped European stocks to open higher on Wednesday, with the pan-European STOXX 600 and the blue-chip STOXX 50 being up by 0.31% and 0.58% respectively at 0900 GMT, as energy stocks were on the rise. The German DAX 30 rose by 0.21%, with the German industrial giant Siemens leading the gains after the company raised its full-year earnings per share outlook. The French CAC 40 remained flat as shares of Iran-exposed car makers such as Renault and Peugeot fell. The Italian FTSE MIB moved up by 0.80%, while the British FTSE 100 gained 0.61%. Futures tracking US stock indices were in the green, pointing to a positive open.

COMMODITIES: Oil prices hit fresh 3 ½-year highs during the early European session on fears that the US President would impose the “highest level of sanctions” against Iran, the third largest exporter within OPEC. Under the expectation that sanctions would tighten oil supply even further, WTI crude touched a new top at $71.17 per barrel before it slipped to $70.96 (+2.75%), while Brent hit a new peak at $77.20/barrel before it fell to $76.82 (+2.61%). In precious metals, gold extended losses towards $1,307.52/ounce (-0.50%). 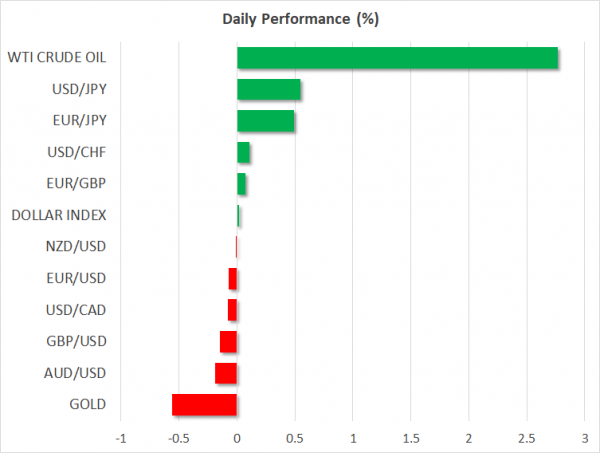 Day Ahead: US delivers PPI data; RBNZ decision in focus

Next on the day’s agenda, the US Bureau of Labor Statistics will release figures on producer prices at 1230 GMT, with analysts projecting the PPI for the month of April to inch down by 0.1 percentage points to 0.2% m/m. Meanwhile, the core monthly PPI is anticipated to reflect a slowdown in the pace of growth, standing at 0.2% m/m as well. Year-on-year, the headline PPI figure is forecasted to decline by 0.2% percentage points to 2.8% in April from 3.0% in the previous month.

In Canada, a report on the growth of building permits in March will be available at 1230 GMT, with analysts predicting the gauge to tick higher to 2.0% from a contraction of 2.6% in the preceding month.

In energy markets, investors will look at the weekly EIA report on US crude oil inventories after Trump’s decision to leave the 2015 Iran nuclear accord yesterday added substantial gains to crude oil prices. According to forecasts, US crude inventories are expected to fall by 0.719 million barrels in the week ending May 4 compared to a rise of 6.218m in the prior week. It would be interesting to see whether oil prices will reach fresh tops today in case the numbers unexpectedly reflect a larger decline in oil inventories or whether they will pull back in the event of an upward surprise.

In terms of public appearances, Atlanta Fed President Raphael Bostic will be talking about the US economic outlook and monetary policy at 1715 GMT.

As for central bank meetings, the Reserve Bank of New Zealand (RBNZ) will announce its rate decision later in the day, at 2100 GMT. Policymakers are widely anticipated to keep interest rates unchanged at 1.75% and as such, attention will turn to the phrasing of the accompanying statement as well as the updated economic forecasts. 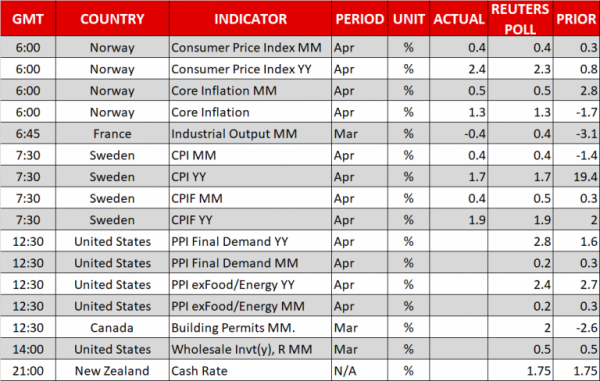 Dollar Edges Up, Stocks Slip As Recovery Doubts Set In