Action Forex
HomeContributorsFundamental AnalysisIs There an End in Sight to the Turkish Lira’s Freefall?

Is There an End in Sight to the Turkish Lira’s Freefall?

The Turkish lira has continued to plummet so far in 2018, sinking to fresh all-time lows as a worrisome cocktail of economic developments diminished demand for Turkish assets. While a potential rate hike by the central bank may help to ease the selling pressure or even trigger a short-term rebound – for the lira’s decade-long downtrend to truly reverse, it may require much more comprehensive reforms outside the scope of monetary policy.

To say that the Turkish lira is in dire straits would be an understatement. The currency is down by 18.5% against the dollar so far this year and 16.2% lower versus the euro, frequently recording fresh all-time lows against both. This is not a new phenomenon, in fact the lira fell 7.4% versus the dollar and 22.3% against the euro last year, while it has been in a broader downtrend for a decade. Lately though, the currency’s plunge seems to have accelerated, something owed to a multitude of troubling economic developments that are causing capital to flee the country.

While Turkey boasted an impressive growth rate of 7.4% last year, other macroeconomic indicators have been less than inspiring, increasingly pointing to an overheating economy. Core inflation currently stands well-into the double digits, at 12.4%, more than double the 5% targeted by the nation’s central bank. Meanwhile, the current account (CA) deficit has widened significantly in recent years, rendering Turkey increasingly exposed to shifts in global market sentiment.

When a country runs a large CA deficit, it essentially means it’s a net borrower, importing more than it exports and relying on capital inflows from abroad to finance the difference. If foreign investors for any reason decide to withdraw their investments, that would probably require the country to run surpluses to repay what it borrowed previously, resulting in a sharp drop in consumption, investment, and government expenditure. In BoE Governor Mark Carney’s words, running large CA deficits is like “relying on the kindness of strangers”. To make matters worse, both the government and the private sector have high levels of debt in foreign currencies, which become much harder to pay back with a depreciating lira.

In such an environment, central bank policymakers should be raising interest rates in order to rein in high inflation and prevent the economy from overheating. Rate increases would also make it more attractive for foreign money to stay in Turkey, thereby keeping the current account stable and reducing the selling pressure on the Turkish lira. Alas, the monetary authority appears reluctant to take the necessary steps, which many pundits have attributed to political pressure, raising questions about the Bank’s independence. 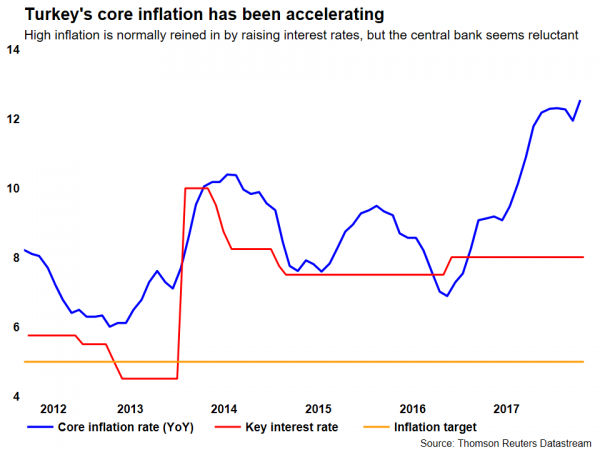 President Erdogan has long been a critic of high interest rates, even describing them as “the mother of all evil”. Bearing in mind his economic views, it was no surprise to see the lira slide again this week after he insinuated that he will take greater control of Turkey’s monetary policy after next month’s election. For investors, the message was that rates could remain unchanged, instead of being raised to combat economic imbalances.

Not everything, but they would certainly help with the current situation. Notably higher interest rates would exert downward pressure on inflation, stabilize or even narrow the CA deficit, and provide a helping hand to the battered lira. There are costs of course – economic growth would slow, consumers would be faced with higher borrowing costs, and Turkish banks may see increased numbers of nonperforming loans. All of these, however, are likely smaller than the costs associated with keeping rates low. Runaway inflation, a ballooning current account deficit, and a plunging lira amid a mass “exodus” of foreign money could quickly set the stage for a much greater crisis.

Will the central bank raise rates?

Markets certainly seem to think so. In fact, expectations around this appear to have halted the lira’s slide lately. The currency stabilized earlier this week, once the central bank announced that it is monitoring “unhealthy” moves in the FX market and will take necessary actions. The next policy meeting is scheduled for June 7, though the Bank could call an emergency meeting before then.

In the event it does raise rates, the magnitude and scope of any hike will be crucial for the market reaction. Will policymakers hike rates substantially to fight inflation and defend the currency, or will they deliver a smaller and mostly symbolic increase to keep the government happy as well? Market chatter seems to suggest that anything less than a 100bps hike would be viewed as a disappointment, as it may generate speculation the Bank will only take “half measures”.

Assuming the Bank hikes rates in a material manner soon, then the Turkish lira could rebound. Looking at dollar/lira, immediate support to declines may come at 4.370, the high of May 9. Further down, the May 10 low of 4.220 could come into view, and lower still, the 4.000 psychological level could halt declines.

On the other hand, if the Bank delivers something less than what markets anticipate – or worse still doesn’t hike rates at all – then the currency could resume its freefall. A clear break above the all-time high of 4.500 would bring the pair into uncharted territory, with resistance to advances potentially coming around the round figures of 4.600, 4.700, and 4.800.

While a sizeable increase in rates could stem the lira’s plunge in the short run, monetary policy can’t solve everything – interest rate changes can only do so much. Without deeper structural reforms that improve the prospects of the Turkish economy, the lira’s multi-year downfall may resume before long. The IMF has recently pointed to severance pay, backwards looking wage indexation, pensions, and improving quality of education, as the main areas in need of reform that would help support sustainable growth in the economy. Until Turkey begins taking steps in that direction, one feels hesitant to call for an end to the lira’s broader slide.