The US dollar appreciated against major rival currencies on Friday. The dollar rally is back on after the two of the largest parties in Italy agreed to form a coalition government and Japanese inflation retreated. Although there is no plan for Italy to exit the European Union it could put it to the test with its fiscal strategy. The U.S. Federal Reserve members have been vocal about two or three more rate hikes this year boosting the USD but concerns remain on the trade front after comments from the US President Donald Trump on talks with China and the future of NAFTA remains uncertain despite the optimism from the Canadian Prime Minister. The release of the U.S. Federal Reserve minutes from the May 5 Federal Open Market Committee (FOMC) meeting where the central bank left rates untouched will be the biggest market event on Wednesday, May 23 at 2:00 pm EDT.

The EUR/USD lost 1.34 percent in the last five days. The single currency is trading at 1.1778 with a resurgent USD and an EUR caught in political drama. The U.S. Federal Reserve is on its way for a rate hike in June and in contrast the European Central Bank (ECB) has not made it clear what the plan is after September when the quantitive easing will end. The ECB has to be thankful for the lower EUR as it could be a factor in boosting growth in the EU and could have a positive effect to reach the central bank’s inflation targets. 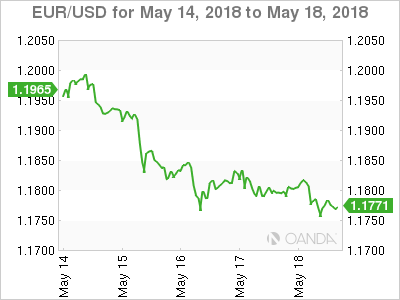 The Five Star Movement and the Northern League are close to a coalition government and would mean the biggest victory of the eurosceptic movement in Europe. Italy is one of the founder members of the European Union and while there have been instances in France with Marine LePen and Germany with the rise of the Alternative for Germany this coalition is now the biggest threat to the EU. Italy represents about 11 percent of the Union’s GDP. One of the hardest hit nations by the recession and also one of the slowest to recover have given way to a rise of populist parties that although fragmented in ideology found common ground in their dislike for the EU.

The release of the Fed minutes will add some talking points to the already priced in monetary policy strategy. The US central bank should continue to tighten and the notes will be a welcomed release on a week with little competition for investor’s attention.

Rising US Yields Have Yen on Retreat

The USD/JPY gained 1.21 percent during the week. The currency pair is trading at 110.70 after US 10-year bonds touched. Seven year high h hitting 3.12 percent. The solid data out of the US has stood out against Japanese data that has struggled to impress. The back and forth in the North/South Korea meetings has not reassured investors in the peninsula and with further trade uncertainty with Washington 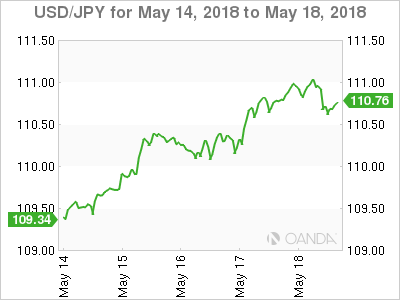 Emerging markets have been the biggest losers agains the US dollar, but so far there are no contagion fears as global growth could be slowed down. If that happens the JPY would rise as it is one of the preferred safe havens for investors in times of turmoil.

The USD/CAD appreciated 0.77 percent in the last five trading sessions. The currency pair is trading at 1.2891 after the loonie lost close to 0.60 percent on Friday alone. The North American session started with the release of Canadian inflation and retail sales data. Inflation fell in April putting less pressure on the Bank of Canada (BoC) to hike rates as annual inflation was 2.2 percent. Retail sales rose but only if auto sales were taken into consideration, without car sales core retail sales were down by 0.2 percent. 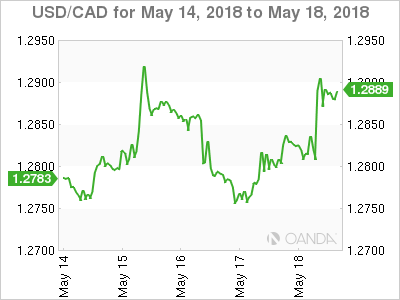 Analysts are begging to walk back their probabilities of a rate at the end of the month after the disappointing data while still taking into consideration that the economy is on the mend after the slowdown in the fourth quarter. Rate hike expectations are still high for later in the year as the BoC usually tries to keep the gap between Canadian and American rates from growing too big. The U.S. Federal Reserve is highly anticipated to go again in June with another 25 basis points lift to its benchmark rate.

The deadline set by US House Speaker Paul Ryan came and went unfulfilled as Canadian, Mexican and American negotiators continue to be far form reaching an agreement on the contentious issues of NAFTA. Canadian Prime Minister Justin Trudeau is optimistic the deal will be renegotiated successfully in May but given the presidential elections in Mexico in July and the US midterms in the fall the window of opportunity on a fast tracked deal is closing.